Unistar announce details of their next smartphone, and first device to use the 64bit, LTE equipped Mediatek MT6732 processor

Phone makers are kicking it up a notch and are quick adopting the latest technology Mediatek has bestowed on to them.

Already we have seen Meizu launch the MX4 with MT6595 chipset set and we are now starting to see Chinese phone makers adopt 64bit architecture thanks to the latest Mediatek MT6732 SoC.

Phone maker Unistar haven’t wasted any time and have already announced that their new X8 smartphone will use the 1.3Ghz MT6742 processor. The chipset is a quad-core model that natively supports LTE, GSM and WCDMA. The Unistar X8 will be launched for China Unicom users meaning that the more popular FDD-LTE network will be supported.

Other standout features include a 13 mega-pixel main camera, 6.5mm deep body, 2200mAh battery (big for the thickness of the phone) and stereo speakers located in the base of the device.

the 5-inch OGS display is a low resolution 540 x 960 unit, however a 720p model will also be making an appearance and the phone also runs on Android 4.4 Kitkat. 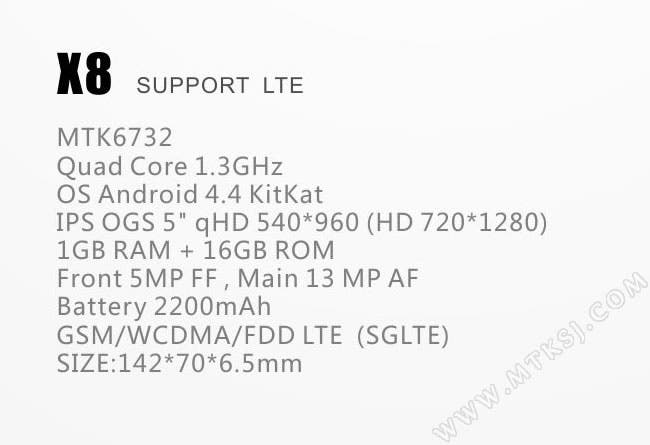 As Unistar aren’t well known outside of China, international customers will need to do some reseller searching to get the phone in their countries. Pricing and a release date have not been announced yet.