DOOGEE, best known for their affordable smartphones, are now taking a look higher up the pecking order with the stylish and promising DOOGEE Turbo 2 DG900.

Each year we see a trend with Chinese phone makers. Last year it was 2GB RAM and 5-inch 1080 displays, and this year it should have been the octacore making waves, but it hasn’t at least not until the MT6595 becomes more widely used.

At the start of this year we would have said that this year would all be about octacore phones, but overall the MT6592 didn’t really bring nearly as much a performance boost that we had hoped, and so Chinese phone makers have been struggling for a feature to give them the boost they need. The answer has been to focus on build and quality!

Metal bodies, thinner designs, more glass, are just some of the materials we are seeing from makers of mid-range phones, and more are set to come.

The DOOGEE Turbo 2 DG900 is one of those phones to gain a boost in quality, but in addition DOOGEE are taking the opportunity to boost their profile a little with some nice specification and feature options.

So the DG900 gets a lager of Corning Gorilla Glass 3 front and rear, the front is protecting a 1920 x 1080 display, and the rear sits in front of a rear mounted touch panel (much like the DOOGEE DG800 and Oppo N1). Tho body of the DG900 looks not unlike the Gionee Elife S5 and is quite quite the compact handset with measurements coming in at 143 x 72.6 x 6.99mm.

As with most of DOOGEE’s range the DG900 runs Android 4.4 Kitkat, with a custom ROM that features quick wake and gesture options. The processor is an octacore MT6592 with 2GB RAM, and the cameras are an 8 mega-pixel 88 degree front with a Sony IMX135 F2.0 camera on the rear. 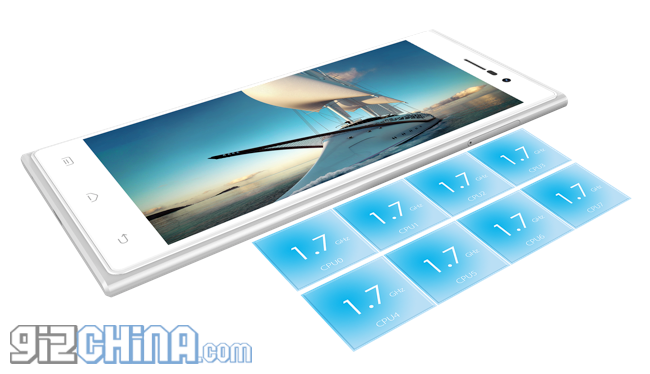 Dual SIM for 3G and GSM but no LTE are included and there is space for a 64GB micro SD as 16GB of internal memory is just not enough these days.

It’s not clear what the body of the phone is made of, either a high quality plastic or a alloy material, but we do know there is only room inside for a 2500mAh battery an no space left for an NFC chip.

We’re really quite excited to see phones like the DOOGEE DG900 arrive out of China. It’s about time manufacturers realise that customers demand more in the way of quality materials from their Chinese smartphones.

The DOGEE DG900 isn’t available to buy just yet but pre-sales for the white and black version have started online for $229.99.