Just as we thought that Vivo might be quietly bowing out of the thin smart phone wars, they go ahead and release a teaser on Weibo which could possibly be the thinnest phone every.

Gionee currently hold the slim phone title at only 5.1mm, and we already have an idea that Oppo will have a 4mm phone to beat that during the Oppo N3 launch, but big brother Vivo won’t be letting Oppo hold on to the world’s thinnest title for long.

So how thin are Vivo planning to go? Well their teasers (posted on to their official Weibo account) show the profile of the new mystery phone next to the 7.6mm chassis of the iPhone 5S. In fact it shows that two of the new Vivo take up nearly as much as the previous Apple range topper.

A little bit of maths has the new Vivo still a shade under 4mm thick at around 3.8mm! At such a narrow size we can expect a comfy and lightweight phone, but what about the battery life and how about the specs? From their previous thin phones we believe the new Vivo will be part of their X range of phones (probably a replacement to the Vivo X5) and as such will likely launch with one of the new range of 64bit Mediatek processors with LTE support. 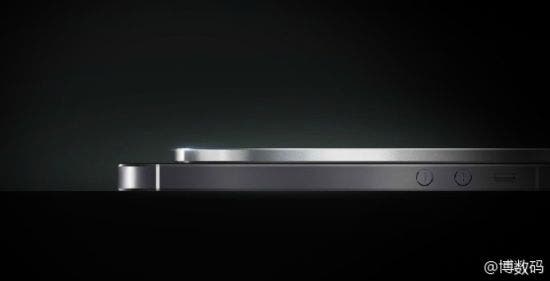 The thin Vivo is just one device we can look forward to from Vivo before the end of the year, we also hope to start seeing the first few details of the next generation Xplay before the year is out too.