After a lot of leaks, Huawei finally made the Honor 6 Plus official today at an event in Beijing. As previously believed, the Honor 6 Plus does indeed come with dual rear cameras, and we can bet all our money on the fact that that’s exactly what the phone’s USP is. 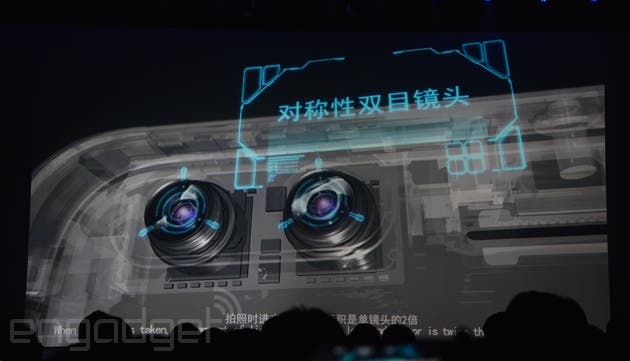 Speaking of the front, there’s also a 5.5-inch 1080p panel on the device, which means that the Plus version isn’t going to replace the Honor 6 that came with a smaller screen. Again, the panel comes from JDI so you know its going to be pretty decent; we’ve seen a lot of Chinese OEMs opt of JDI screen in the past year or so. Under the rather simple looking exterior, Huawei have fitted an octa-core Kirin 925 homebrew CPU, along with an I3 co-processor that doesn’t take too much power, and takes care of your fitness and such. There’s also an infrared blaster in tow so you don’t need to reach out to your TV remote all the time.

Besides, it has 3GB of RAM — as much as the original Honor 6 — along with 16GB/32GB of internal storage… which can be taken up to 128GB via means of microSD. It also has a rather good looking (on paper at least) 3600mAh battery, which as Huawei doesn’t fail to mention, is of greater capacity than the iPhone 6 Plus, which co-incidentally (or not) shares nomenclature with the Honor 6 Plus.

Like most other phones of this day and age, the EMUI 3.0 powered Honor 6 Plus does gestures too. This includes off screen gestures, and other handy features such as double click volume down to take a photo, up for a quick voice memo. With NFC, TD/FDD-LTE Cat 6 and dual SIM features taking care of connectivity/telephony, Huawei have you covered more or less. As usual, the deal is pretty lucrative, starting at only 1,999 CNY or US$320 unlocked. Expect your choice of reseller to start shipping the Honor 6 Plus for somewhere around US$400 soon!