Huawei said they are set to take on the premium phone market from this year forward and according to the latest Huawei P8 leaks they weren’t kidding.

Huawei recently announced that they would be shifting their focus away from the entry-level phone market to work on boosting sales for their mid-range and flagship phones. Reasons for this being huge competition from Xiaomi, Meizu, and all manner of smaller phone makers, plust the fact there is simply no profit available for them.

Instead Huawei won’t to work on improving their mid-range and flagship ranges and launch phones that will excite buyers and draw them away from devices made by Xiaomi, OnePlus, Oppo and Vivo. They also help a more premium brand image can boost overseas sales. 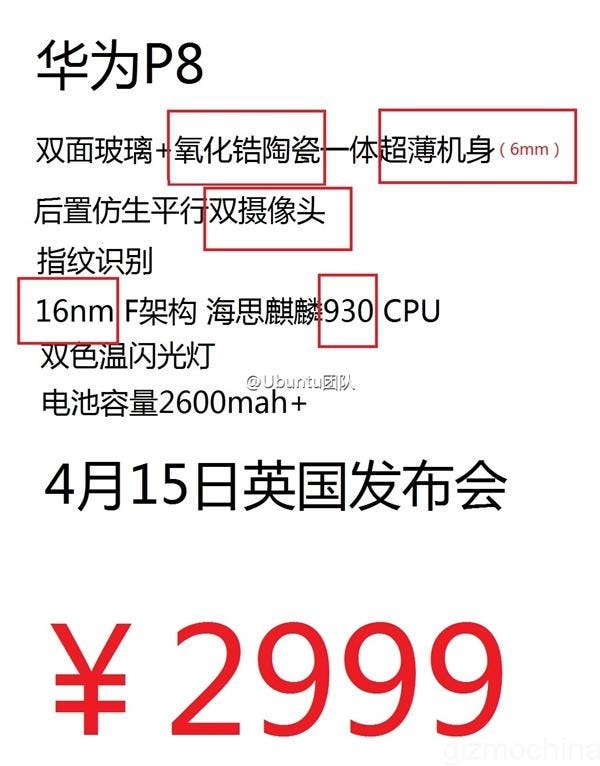 With this in mind leaked Huawei P8 specifications do look promising. An image recently posted on Weibo in China states the new P8 model will bost a 5.2-inch 1920 x 1080 display, Kirin 930 16nm processor, 2600mAh battery all packed in to a body measuring only 6mm.

Some analysts have speculated that the P8 might be also feature the sale dual camera technology as the Huawei Ascend P6 Plus, but with an upgrade from 8 mega-pixel to 13 mega-pixel. We can also expect at least 3GB RAM from the phone and the latest version of Huawei EMUI.

The major issue is the price, for at 2999 Yuan we cannot help but feel that latest Xiaomi, and even Oppo phones might be a major rival at this high price point.