According to a report originating from MediaTek’s home country of Taiwan, the fabricator will be making a Cortex-A72 based chipset for smartphones, which is expected to go into mass production later this year. The 64-bit SoC will combine Cortex-A72 cores with A53 ones using the big.LITTLE technology. 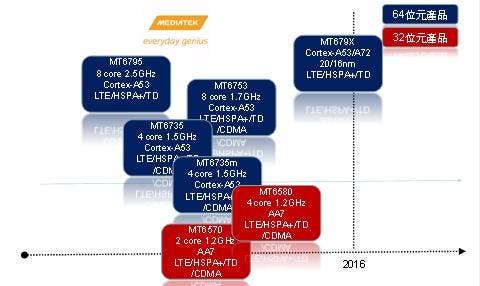 As seen from the roadmap above, the SoC series will have the prefix MT679x, and will have SoCs in 20nm and 16nm flavour. It will also offer support for LTE and 3G frequencies, something that is becoming more common with each passing day — on-board modems.

There are also talks that MediaTek is looking to ditch Mali graphics processors for AMD made ones, but more details on this should appear later this year.

Considering the thundering start that MediaTek has had for 2015, do you think it will be able to carry it (or even do better) till the end of the year? Let us know of your thoughts in the comments section below.

Previous Not Apple, not Samsung, but Huawei filed the most international patents last year!