Today we are heading one step away from the usual reviews about Chinese phones and tabs, paying attention to a TV Box, Set-Top-Box, Mini PC or however you wanna call it. It’s the Minix Neo Z64 that we’ve put to the test this time. Minix are a very popular manufacturer of a large variety of media players in China and other countries. The Neo Z64 has been launched not so long ago and is based on the Intel Atom Z3735F x86 SoC. Thanks to that it is available in two flavors with either Android or Windows 8.1 running on the box. We decided to opt for the Android version as we consider this OS to be better for media center use. So lets not waste any more time and let’s get right into the review!

With Minix being a very popular brand we had certain expectations that had to be met for the overall appearance of the device. We haven’t been disappointed as the Minix Neo Z64 arrived in a beautifully and professionally designed box that doesn’t scream “China” at all. Everything you need to run the Z64 is within the box, that being a HDMI cable, a micro USB cable, a power supply and an infrared remote. As we ordered the box from Geekbuying, we also received two gifts with the Minix Neo Z64 being a 8GB micro SD card and a wireless mouse that admittedly feels extremely cheap but does its job.

As for the Minix Neo Z64 itself, the design is very simple. It’s a small black cube made from metal with a matte finish and rounded corners. Dimensions of the box are 11.5cm for each side and 2cm for the height. The top houses a large Minix logo, the bottom the Android mascot and some openings for cooling the device. The front side of the device features the infrared interface and a status LED, the right side contains the micro SD card reader, power switch and two USB ports, on the right side the huge Wi-Fi antenna is attached and the rear side is housing a 3.5mm jack, a HDMI port, a RJ45 Ethernet port and the power inlet.

The build quality is very good and definitely worth the money you pay for the Minix Neo Z64. The device also comes with CE, FCC and RoHS certification.

The Minix Neo Z64 comes equipped with Intel’s popular budget SoC Z3735F which belongs to the BayTrail Atom series. This SoC is based on four x86_64 cores clocked at a maximum frequency of 1.83GHz and a Intel HD Graphics Gen7 GPU. Minix packs this SoC together with 2GB of LPDDR3 RAM and 32GB of internal eMMC memory. The Minix Neo Z64 is available in two versions with either Android or Windows pre-installed on the box. Thanks to the large Minix community, meanwhile it became possible switching the Android version of the Box to Windows and vise versa. There also have been successful attempts to boot other operating systems on the box, including Ubuntu Linux. This makes the Neo Z64 far more than just a media player or gaming console. Attach your keyboard and mouse and you have a full-blown Internet and office PC.

Join GizChina on Telegram
Read Also:  Android: A new dangerous malware is hiding in these applications

Performance of the system has been very satisfying during our tests. The Android 4.4.4 that came pre-loaded on our unit is running very smooth and without any hiccups. No matter which games or apps you throw at the box they will run smooth, which once again is a proof for how powerful even those entry-level Intel SoCs are. Of course the box will mostly be used for media playback, so we tested this as well with XBMC (now renamed to Kodi). We threw different files at the box including 1080p, 2k and 4k files with different container formats like MP4, MPEG4, MPEG2, WMV, MOV, MKV, FLV and Real Media. The box handled all of these like a charm and also delivers support for DTS or Dolby Digital. The only thing which isn’t supported are files using the H.265 codec. 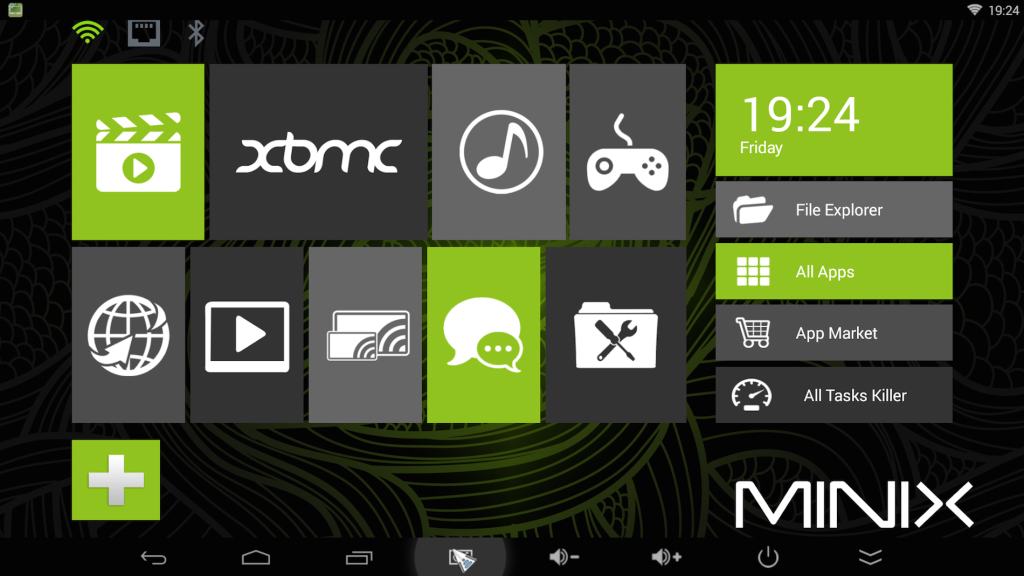 The Android on the Minix Neo Z64 comes with a custom UI optimized for the use on a television. Unfortunately, Neo this time didn’t to any in-depth modifications, so the custom UI basically is just a launcher. Minix also added an application that acts as a receiver for AirPlay and DLNA streams, which again comes handy if you use the box along a television. The remaining parts of the system are mostly Vanilla Android, which can be a pain in the ass when trying to control the box solely through the remote control that comes with it. The use of a wireless mouse – or even better an air mouse – is crucial for serious enjoyment of Android apps and games. For this reason we purchased an air mouse along the box which is the Tronsmart TSM01. At only 30 bucks this one is pretty cheap yet works like a charm and even adds a small keyboard for typing.

The Minix Neo Z64 isn’t quite the cheapest TV box / mini PC available at $145 but really does deliver and thus being worth its price tag. Build quality is good, performance is good and community support is good. There are no significant bugs, though we would wish to get a more optimized UI with future updates. Everyone looking for a device like this should really put it on his comparison list.

We purchased the Minix Neo Z64 from Geekbuying, where it is available with both Android and Windows along with different bundles to choose from.

Next Zopo to launch a stylish mid ranger