Kingzone did a great job back with the K1 last year, which can easily be described as the first available Mediatek-based flagship device from China. When they released the Kingzone N3 later in the year, they obviously had the goal of achieving the same success again within the entry-level market. In the beginning it seemed like they would indeed be able to do exactly that, but still failed in the end. We have been quite shocked about how Kingzone screwed it up when we tested the N3 in late 2014. They faked the battery capacity, delivered a buggy software and the audio quality was bad as well even though they advertised a dedicated Yamaha DAC. The camera was also pretty much unacceptable and in the end led to us not recommending this handset.

Kingzone didn’t abandon the idea behind the N3 and try to deliver once again in form of the Kingzone N3 Plus. This handset packs a better 64-bit SoC, more memory and more RAM into the same body we are already used to, all that at an attractive pricing. But is that enough? Did they repeat any of the past mistakes? Let’s check that out! 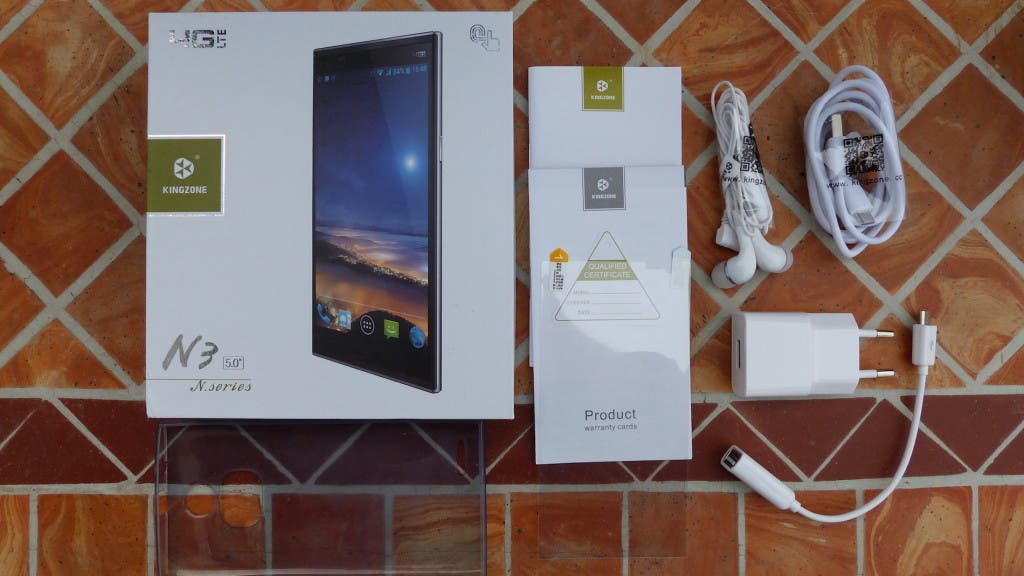 At the first look the Kingzone N3 Plus is delivered in the very same box as the original N3. And indeed this first impression gets confirmed as soon as you take a look at the boxes rear. A sticker with the specs of the phone is glued on there, and if you remove it, the specs of the original 32-bit device appear printed on the box. It even packs the same accessories as the predecessor, those being documentation, one protective film, a plastic bumper, headphones, one micro USB cable, one 1A wall charger and even an OTG cable.

The design of the Kingzone N3 Plus is identical with the original N3. There isn’t any difference both in the look and feel and the build quality. Now that’s actually a little disappointing. Don’t get that wrong: The Kingzone N3 Plus is a well made and nice-looking handset, but Kingzone actually once told us that in the future they are going to use a real metal body. That actually didn’t happen which is sad because it would’ve set this phone miles apart from any MT6732 based handset out there right now.

But as we said: Build quality is great and the plastic used doesn’t feel cheap at all, so that’s definitely complaining at a very high level. Also the screen does use Gorilla Glass 3 for increased toughness and there are no moving parts, which still give the handset kind of a premium appearance. It’s pretty slim, too at 143 x 72 x 9mm and a comfy weight of 140g.

The screen was one part of the original Kingzone N3 we have been quite satisfied with. Yes, it is a 5-inch panel that operates at “only” 720p, but the panel comes from Sharp and delivers IPS and OGS technologies along with a very nice image quality which lets you forget about the missing FHD quickly. The touch panel also is done nicely with a very slick surface making every gesture a breeze.

Unfortunately, not everything is perfect. Our review sample of the 32-bit N3 had a few bad pixels and this one has again. This indeed appears to be an issue with the N3, as numerous people complain about that. It’s plain sad that Kingzone still didn’t do something about those frequent cases of dead pixels on the panels used inside the N3. So that already is the first flaw they didn’t fix – keep counting.

Now performance and specs is where the most has been changed compared to the old N3. The Kingzone N3 Plus comes equipped with a MT6732 64-bit quad-core SoC clocked at 1.5GHz, 2GB of RAM and 16GB of internal memory. Other specs remain the same except the support for NFC, which has been dropped – something we do not understand at all. Kingzone also seem to have changed the e-compass used inside the N3 Plus, as it isn’t working as well as it used to anymore. We had issues of a constantly spinning compass with several (but not all) apps.

Performance has been greatly improved of course due to the powerful SoC and the 1GB of additional RAM. Not only multi-tasking with apps is a breeze, playing the latest games is as well. Comparing the real-life performance of the N3 Plus to the N3, we would say the N3 Plus is about three times as fast as the old MT6582 based handset. That’s quite impressive and once again shows that Mediatek really did some magic with those new 64-bit chipsets.

The Kingzone N3 Plus is running Android 4.4.4 KitKat – the norm for all MTK 64-bit handsets these days. Of course a Lollipop update will be released in the future, but expect that to take until June, as Mediatek postponed the final sources on those chipsets till then. As usual, Kingzone left their ROM stock Android and only included their own launcher. There isn’t any pre-installed bloatware and the ROM comes with support for off-screen gestures, Mediatek MiraVision and notification LED control. Sadly, Kingzone forgot about one very important thing: Unified storage is missing! These days this feature became kind of a standard and this is why we think this is not acceptable. It essentially means that the internal memory is split into data and apps. You have about 5GB available for applications and if you used that up, you will not be able to install more unless you remove some of the old apps.

As mentioned in the beginning of our review, the original N3 was a real let down in terms of audio quality. We have been very happy to see Kingzone improving this with the N3 Plus, taking full advantage of the Yamaha YDA165 DAC. The internal speaker has been greatly improved, delivering a clear audio playback with no distortions even on full volume and subtle yet present bass. It’s for sure not on-par with high-end phones but at the price point more than acceptable. The real fun, as oh so often, starts going by attaching your favorite headphones. The Yamaha DAC delivers a clear, powerful and very balance audio output with no background noises or distortions. That’s how we like it and we are sure that audiophiles will like the Kingzone N3 Plus for that, especially after installing some sound enhance like Viper4Android to fine-tune the output.

During our test, the Kingzone N3 Plus delivered good results for mobile network, Wi-Fi and Bluetooth reception quality. It wasn’t on high-end level, but above average though. We have been surprised to see 3G and LTE connections even in places where most devices fail. Unfortunately, Kingzone screwed up the GPS antenna. The very first fix took us 20 minutes to get. Fix times got better afterwards, but it still took the handset up to 40 seconds to fix a proper amount of GPS satellites each and every time. GLONASS satellites took even longer with up to 5 minutes. On average we have been able to get a fix for 13 satellites and an accuracy of 3 meters with this handset.

Camera performance of smartphones gets more and more important, as many users drop their digital cameras and solely rely on their phones for taking pictures. Now the original Kingzone N3’s camera was performing extremely bad and you would believe that Kingzone fixed that with the N3 Plus. Unfortunately they didn’t – and it got even worse! Pictures never look sharp, not even close-ups. Night shots are close to impossible due to the noise production and lack of sharpness and the LED flash creating a reddish tint. What’s more, the camera does have huge issues with direct sunlight. It will create ugly blue fractals, making pictures look awful. Video quality is pretty bad as well.

Seriously, we are sick and tired of fake battery specs. There has been a time when pretty much all Chinese phone makers lied about their batteries, but those days are long gone. This of course means that it gets even more unacceptable if a phone maker labels their cells wrong. Kingzone is one of them. Back with the Kingzone N3 they claimed the handset to come with a 2,800mAh. Due to the dimensions and weight of the cell, as well as the battery life, we doubted that back then. Now the Kingzone N3 Plus is still supposed to come with a 2,800mAh battery. The difference: This time we have been able to verify the real capacity. Guess what: In reality it only is 1,800mAh! That’s a whopping 1,000mAh less than advertised. Now this is far away from being a mistake, and we indeed call that criminal. Kingzone clearly want to gain advantage over other phone makers by claiming false specs, and that is far away from being acceptable. This low capacity also means that the battery life is pretty bad. The screen-on time you can squeeze out of this cell is just a bit about three hours, which translates to a day of battery life, but only if you take care about your energy consumption. You really need to cut down on screen brightness and stay away from games at any cost.

The Kingzone N3 Plus could be a very nice handset featuring a nice design, good build quality and good specs. Yet it fails to be due to the inability of Kingzone to learn from their past mistakes and the repeated lies about battery capacity. Probably the only way for them to learn their lesson is if no one buys their products. And exactly this is the reason why we recommend you to stay away from the Kingzone N3 Plus.