MediaTek has really taken the mobile world by storm. They’re processors have been in numerous phones and devices ranging from cheap budget phones like the ECOO Aurora E04 and JiaYu S3 to top of the range flagships like the just released HTC One M9+. Now the company is hoping to bite at Intel’s success its latest duo of tablet processors – the MediaTek MT8163 and MT8735 both of which feature four cores and 64-bit architecture. 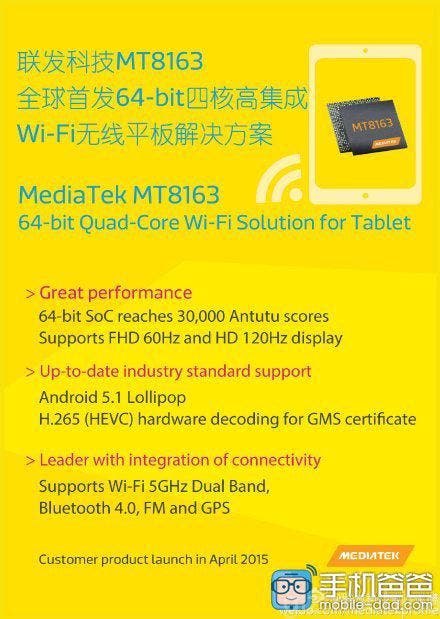 Up first we have a low-cost processor named the MT8163. This chip is designed for budget tablets and supports WIFI connection only. Mediatek are sticking to A53 cores, pumping out enough juise for 1080p. Lollipop 5.1 is the prefered OS, and the SoC comes with H.624 video, dual WIFI, BT 4.0. and GPS. 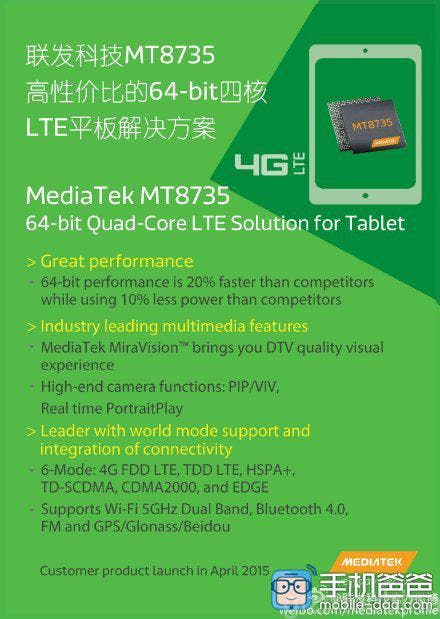 Further up the field is the slighly upgraded MT8735 chipset with intergrated LTE model for FDD-LTE, TDD-LTE, WCDMA, CMDA2000, full-mode 4G tablet TDS, and GSM networks. The rest of the hardware remains largely unchanged to the budget MT8163.

Expect more Chinese, and international tablet makers to offer Mediatek processors in their low and mid range tablets once these new processors launch.

Next Exclusive: Official Specifications of the UMi EMax