Xioami boss Lei Jun has hit back on Weibo against rumours that his company would stop production of the Xiaomi Mi Pad Android tablet.

It is common knowledge that Xiaomi sell more than just Android phones. They also have wearable, cameras, accessories and of course the Xiaomi Mi Pad tablet. The Mi Pad launched last year and was one of the first Android devices to come with the powerful Nvidia K1 processor. Since then the Mi Pad has gone on to launch in Malaysia, India and a few over Xiaomi global markets as well as though unofficial resellers.

We’re not sure how many Xiaomi Mi Pads have been sold, but Xiaomi recently claimed it to be one of the best-selling Android tablets on the market in response to rumours that they were planning to end production of the device. 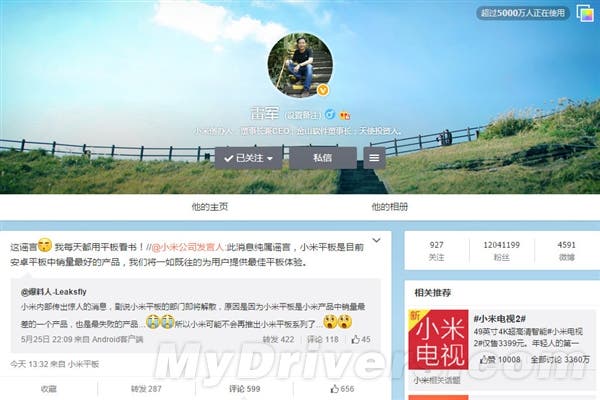 Rumours circulating Weibo claimed that Xiaomi were having a hard time selling the 7.9-inch tablet and that they would drop the product and not think about replacing it with a Mi Pad 2. The rumours even caught the attention of Xiaomi boss Lei Jun who retweeted the rumour stating it was untrue.

So if the Mi Pad is such a good seller, when are we actually going to see a 2nd generation model? I would personally love to see an updated Xiaomi Mi Pad 2 with a little more RAM, but more importantly built-in 4G LTE. What other features would you like to see in a Mi Pad 2?