Last month, we broke news that Xiaomi was planning to launch its products in Brazil, and now everything seems directed to an event which will be held in the country on the 30th of this month.

We have no doubt that the 30th of June will be a day of great emotions, as Meizu and Huawei marked press conferences for the launch of the two highly anticipated flagships in the MX5 and Honor 7. On the other hand, China’s Xiaomi is keen to ensure they’ve also prepared a good surprise for their fans in the same day; just that they’ve chosen fans from another country.

Last night, Xiaomi co-founder and president Bin Lin posted at his Weibo Page a picture of himself wearing a Brazilian Football Uniform and stated that there will be good surprises in the date. At the same time, the Brazilian local media reported a Xiaomi launch event scheduled to occur next Tuesday, i.e., the 30th. 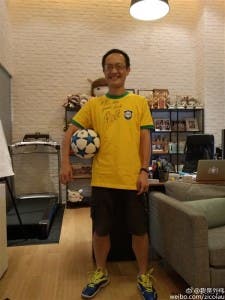 The event will reportedly take place in Sao Paulo. The company should announce the date for the availability of their products. As for pricing, it would be interesting to see how Xiaomi approach the Brazilian market. Xiaomi is known for its high-quality, low-priced products, and achieving that in the Brazilian state is going to be quite a task, especially considering the high taxes.

Although will be a private event, the company offers invitations to people they call “Mi Fans” that want to check closely, the invite basically says:

“Yes, you can start yelling, we already started! \ o / And guess what? You are very welcome to the launch of Xiaomi Brazil that will roll in SP. After all there is no one better than our fans to share this moment. We will accommodate as many people as we can, it’s just placing the order at this link: http://www.mi.com/”

As announced in their website, the company does not guarantee that the registration made by the users will serve as authentication and the number of entries will not exactly match the number of people interested in following the event. That is, many people may be left out even if they were the first to sign in the website.

The launch in the country is reflected as one more step to be fulfilled by the Chinese company which is already expected with great anticipation. If I asked anyone here in last year about Xiaomi the answer would be the same: Never heard of, but recently the winds have changed and the company’s name hit the headlines here. The phrase stated by the company on the head pictures can translate the feeling: “Always believe that something amazing is about to happen.”

Other Chinese and Asian companies such as Asus proved that it is possible to sign their name here despite the difficulties set by the local government, and nothing less than success is expected for Xiaomi here with their good and affordable products.

No doubt the 30th promises big news and emotions and we will be here watching and covering every new detail.