China is an interesting place. It’s not just the culture, but also (obviously) the tech that attracts many around the world to the country. China has some of the most passionate people in the world, and as you shall read, there also happen to be some who’re crazy rich… perhaps more than you could think of.

Real estate mogul Wang Jianlin is the richest man in China. You might never have heard of him before, which is why you’re surprised to know that he’s richer than Alibaba’s Jack Ma. Nonetheless, its not his riches, but his two Apple Watch Editions that we’re going to tell you about.

The Apple Watch Edition is arguably the most expensive piece of wearable tech. And it’s primarily made for humans; Jianlin, however, doesn’t believe in that school of thought.

The two super-expensive digital watches sit on his dog’s wrists. Yes, you read it right, HIS DOG’s WRISTS! To top off the madness, the dog’s Weibo account (yeah, the dog has his own Weibo account – you probably don’t) had the following update earlier, attached to the picture of his (below): “I have new watches! I’m supposed to have four watches since I have four long legs. But that seems too tuhao so I kept it down to two, which totally fits my status. Do you have one?” 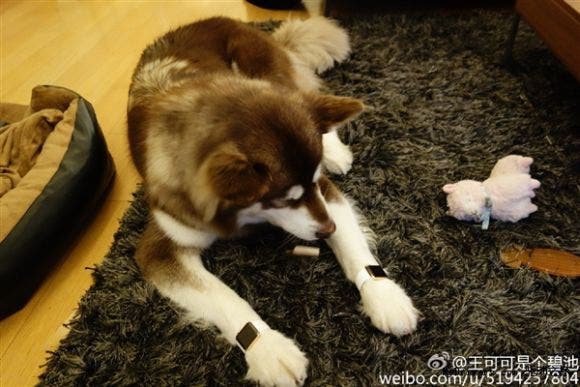 Previous Siswoo team up with Jazztel to offer phones in Spain