The Xiaomi Mi Note has been my daily driver for the past few months and I honestly see no reason to replace these beast of a phone. Here is my full Xiaomi Mi note review.

Over the past few months I have ran a standard, white, 16GB Xiaomi Mi Note as my daily driver. Only when the LeTV Le 1 (LeTV Le1 review here) arrived did I deviate from the premier Xiaomi phone, but even then (now) I continue to carry both with me at all times.

When Xiaomi launched the Mi Note they announced the standard edition Mi Note with 3GB RAM, 1080 display and Snapdragon 801 chip, and the Pro model with a 2K display, 4GB RAM and Snapdragon 810 chipset.

The SD801 model was the first to ship but some fans opted to wait for the Mi Note Pro to become available. A decision many people have regretted due to the continued overheating and performance issues of the more modern SD810 processor.

There was a lot of criticism when Xiaomi decided to release a smartphone costing more than their usual RRP, but that extra cost has gone purely into better materials and a higher standard of build quality. Compared to other phones I have used this year, the Mi Note still remains the best built phone of the year (at least in my mind).

Not only does the Xiaomi Mi Note boast the largest display of any current Xiaomi phone, it also sports the narrowest screen bezels of any Mi phone, it’s the only Xiaomi with glass front and rear and has the thinnest build too. 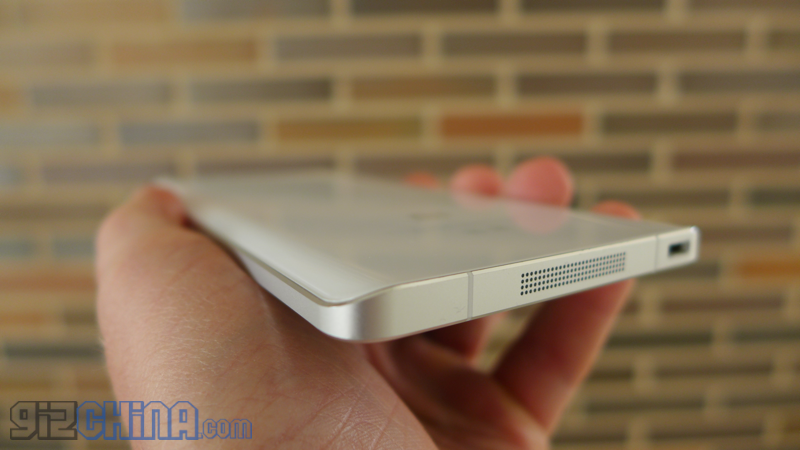 It’s not just on paper where the Xiaomi Mi Note looks and feels premium though, the quality really shines when you first pick the phone up and handle it too. It feels thin and extremely well made. Even with a 5.7-inch display it doesn’t feel much larger than some 5.5-inch phones currently on sale (only slight wider and longer than the LeTV Le 1). 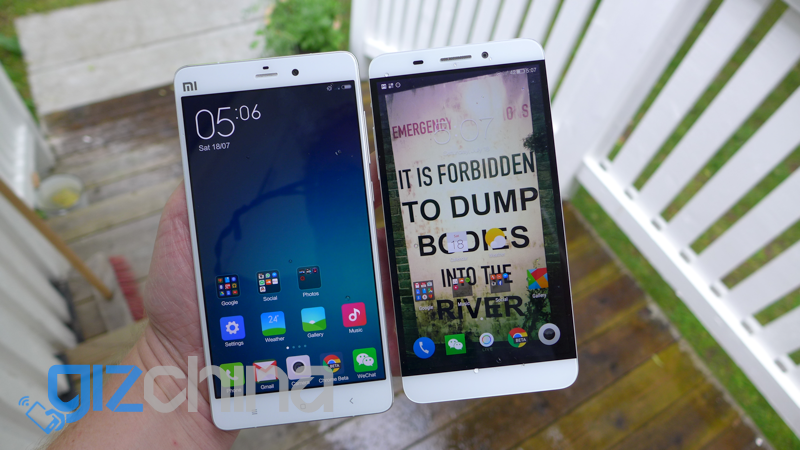 The all glass and alloy construction means that the Mi Note really does ooze quality, but the glossy curved rear panel can also cause a few scares when you first use the phone. Place the Mi Note on a surface that isn’t completely flat and the phone will slip away on its own. Thankfully the only tumble my phone has had is on to my Macbook Pro and its the Macbook that came away with a dent.

The processor in the Xiaomi Mi Note is last years Snapdragon 801, the phone ‘only’ has 3GB RAM, and the main camera is the same 13 mega-pixel Sony IMX214 camera that Elephone and Ulefone use on their phones. To top it off there is a 1080 display too. These specs are pretty much the same as the flagships of 2014, and that’s all fine by me as it all works flawlessly together!

The Snapdragon 801 is still an amazing processor, with killer performance and super fast GPS. To use a well optimised SD 801 phone and complain about performance is just totally unheard of. The same can’t be said about the newer Snapdragon 810 (and 615).

I might be used to using phones with 4GB RAM, but you don’t really feel the difference when going to a 3GB RAM phone, and a 1080 display is not an issue when the screen looks as good as the one Xiaomi are using. 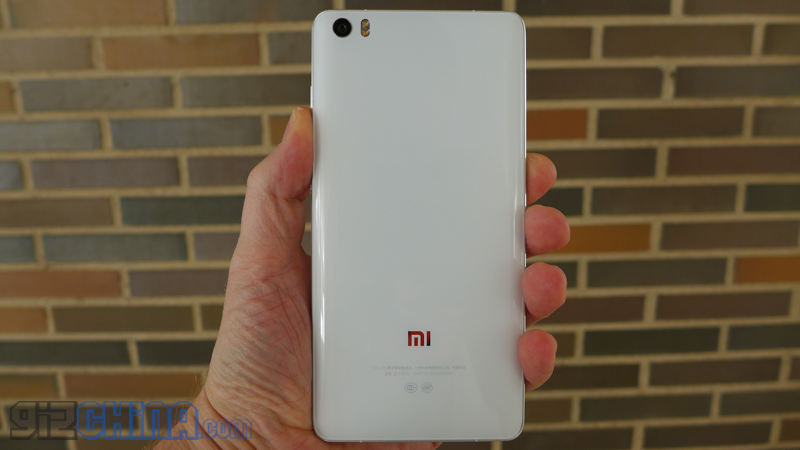 The Sony IMX214 might be the same camera that Elephone and Ulefone are now using, but it is also the same camera that OnePlus and Vivo used on their flagships last year. It remains the top choice as manufacturers are able to correctly optimise the sensor and get the most out of it. The same cannot be said about the 20.7 mega-pixel Sony IMX220 found in some phones.

Usually there is one point that might let down a phone but the only hardware complaint I have about the Xiaomi Mi Note is the lack of SD card memory expansion. With that said though I do have all my apps on my phone plus 957 photos and a little music with just under 1GB to spare. I could probably save some space if I cleaned up the junk photos, and downloads I have and have closer to 2GB left. So an SD card slot would be nice, but I haven’t felt the need for it yet.

Having owned the Xiaomi Mi Note for such a long time I have had ample time to test the camera in all situations and find it to be a stunning shooter. In MIUI V6 on the Mi Note the camera app comes fully equipped with a whole host of features, one of those being HDR (available in Auto, Enhanced, Live or Off). Generally I would choose to shoot a photo in normal and HDR and choose the best, but on the Mi Note I have been taking all my photos with HDR Auto.

The speed of capturing photos in HDR Auto is still very fast and you aren’t likely to miss a shot due to slower save times (present in earlier phones with HDR) and the results of using HDR on the Mi Note are simply stunning.

I could go on to praise the camera on the Mi Note, but I’ll simply say that the camera performs better than the Vivo Xshot, is amazingly fast and currently the only phone I own which is a close match in performance is the LeTV Le 1.

Xiaomi ship MIUI Version 6 on all their current phones, but although they have the same version number they don’t all offer the same features. On the Xiaomi Mi Note for example there are a lot more camera features available than say the MI4i or Redmi 2.

Overall though the features and general usage is the same as MIUI on any modern Xiaomi phone. It is feature packed and easy to use. The system also runs exceptionally well on the Snapdragon 801 with 3GB RAM, with instantaneous app loading.

Is there anything to complain about? Well personally no, but some of you might not be happy buying a flagship phone that still runs Android 4.4.4 Kitkat when most phones are coming with Android 5.0 Lollipop. In reality though this Kitkat version of MIUI V6 has every feature that I could want, and runs as fast as lightning. In comparison the Xiaomi Mi 4i has Lollipop based MIUI on a 64bit Snapdragon 615 chip and we all know how badly that turned out.

I’ve changed the format of this review and clumped many different features under performance as I believe they all affect the useability of the phone in different ways and the “performance of the phone as a whole.

Performance in terms of speed of the phone doesn’t really need to be remarked upon. The Mi Note (remember this is the standard version of the phone) is a fast beast by anyones standards, plus it doesn’t suffer the overheating issues of the Pro version.

Battery life is very good too. I am easily able to get through a day and a half of heavy use and 2 days of light use. Obviously different activities will run the battery down quicker so take your USB wire and charger if you plan to navigate using Google Maps and LTE for a couple of hours as this will eat your power. A typical day for me will see the Mi Note running LTE, GPS and WIFI all the time, with the display on 3/4 brightness, with a 2 hour bike ride streaming music and Strava collecting data.

As you can see from my use of Strava and Google Maps I’ve also used the GPS a lot and found ti to be fast and accurate and not easily confused with in city centres. This is one area that Qualcomm always do well on.

Call quality is perfect, with calls sounding crystal clear and no dropped calls. LTE and WIFI signal strength have also been nothing for me to comment on or worry about.

And finally Audio. Audio is much better than any previous Xiaomi both through the large external speaker in the base and through headphones. I would say that the LeTV Le1 is better overall for audio, but there is very little to distinguish the two.

With the exception of the extremely slippery back there is nothing to complain about with the Xiaomi Mi Note in my experience. There was a bug in an earlier version of Gmail which would close the app when trying to view mail from all your mail boxes but this has now been fixed, so the Mi Note get’s an all clear.

Speed and performance is what you would expect from a flagship phone. Even if the Pro version of the phone performed well and didn’t overheat I would still recommend you to go for this version as the Snapdragon 801 with 3GB RAM is still a potent power plan.

Camera performance is incredible, Audio is very good, and the stability and overall usability of the phone is just what the price would suggest. The Xiaomi Mi Note is a premium flagship device.

You can buy the white version of the Xiaomi Mi Note from the GizChina shop for $374.99 or the black or bamboo version for $379.99. There is even a pink version of the phone available to should you fancy it.

So should you buy the Xiaomi Mi Note? Well this is a little more tricky. In my opinion the LeTV Le1 boasts equal performance, almost equal camera performance and equally good battery life for only $314.99, but if it is build quality and design that you want then the Xiaomi Mi Note is certainly worth buying (just keep clear of the Pro version).