Leaked photos and even an Antutu screen shot are pointing at the existence of a new flagship Meizu phone, another Meizu MX Pro model.

These alleged leaked images of the Meizu MX5 Pro Plus tell us a number of things 1) Li Nan might have been bluffing about the death of the Meizu Pro range (just as he had with MX4 and MX4 Pro pricing last year), and 2) Meizu really do not know how to brand their products and features very well.

After seeing the company try and get away with naming their MX4 Pro audio system “Retina Sound” (good job Meizu…) and their “Think High” launch (timed right after Jackie Chan’s son was arrested on cannabis charges), and not to mention the numbers times Meizu have ripped of Apple, you would think that they would spend a little time giving their next products a better name. Well they haven’t.

The Meizu MX5 Pro Plus will be a pro level phone just like the MX4 Pro, but it could be as large as 6-inch this time, hence the ‘Plus’. 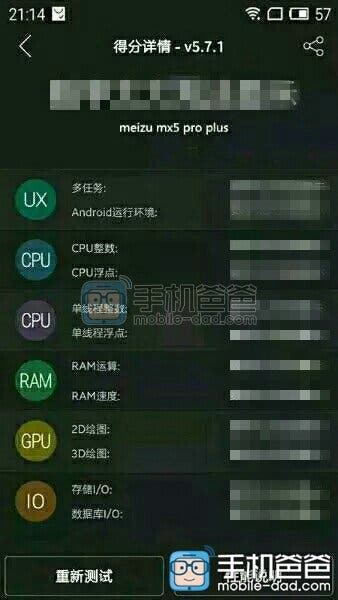 Unsurprisingly the design of the phone hasn’t changed from the MX, only growing in size and having a physical home button added beneath the display. It seems likely that the physical home button will have a fingerprint scanner and the screen with be a 2K resolution panel.

The sites who originally posted the images of the Meizu MX5 Pro Plus also state that the processor could either be a Samsung Exynos 7420 with 4GB RAM, although a Snapdragon 820 has also be mentioned too. It seems likely that the rear camera will remain a 20.7 mega-pixel Sony sensor too.

So perhaps the Pro range of Meizu’s phones are back. Are you excited about the prospect and do you think the makers of ProPlus (a caffeine based stimulation pill) will be happy that Meizu have borrowed their name?