With 3 of the most talked about Chinese Android flagship phones in our hands what a great opportunity for an Antutu shootout. Find out which scores the highest between the OnePlus 2, LeTV Le Max and Meizu MX5.

While Antutu on it’s own doesn’t really give you an idea of how a phone might run in the real world, it is still a popular medium when comparing the latest flagship Android device to one another. To make things a little more useful I decided to run Antutu on the LeTV Le Max, OnePlus 2 and Meizu MX5 side by side so we can watch how fast each phone deals with the Antutu benchmark process.

When I set out to perform this test I was just going to see how the LeTV Le Max and OnePlus 2 performed. As they both have Snapdragon 810 chipsets and 4GB RAM I thought it would  be an exciting comparison. To make things more interesting though I also included the Mediatek Helio X1o powered Meizu MX5 too. The Meizu gives up 1GB of RAM compared to the other two with just 3GB rather than 4GB, but with Mediatek’s improved performance over the year it would make an for a good experiment.

Update: I have updated this shootout with an additional video and set of results. The first video shows the Antutu scores of all 3 phones after a single Antutu test. I have now also added a video showing the 3 Antutu tests back to back on all 3 phones plus the results of each test. The second test is the more interesting of the 2.

As you saw in the video the LeTV Le Max managed to keep every so slightly ahead of the OnePlus 2 in both the speed of the Antutu test and also the final benchmarks. The difference is minimal though and between the two phones they are both plenty fast enough in the real world. 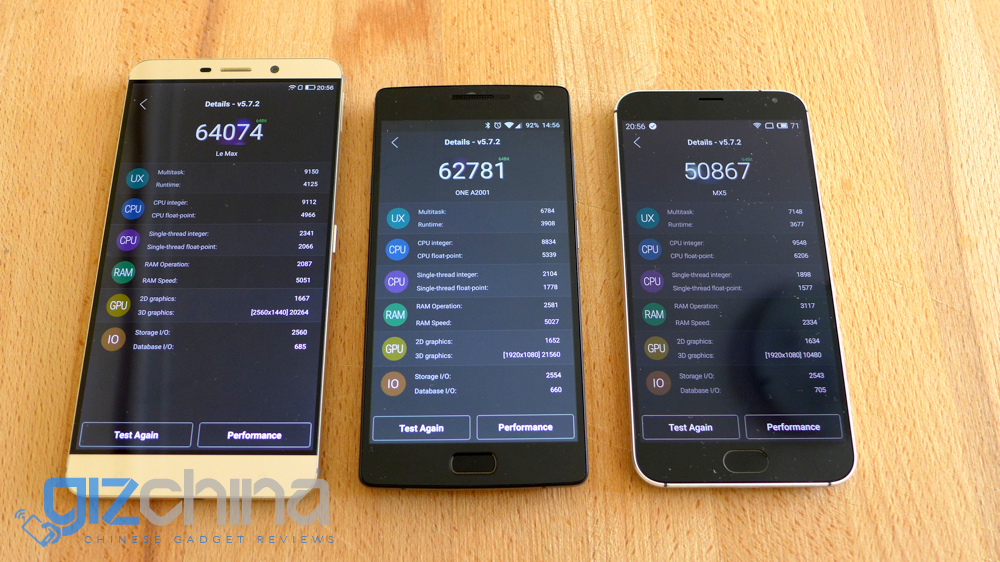 The Meizu MX5 is the real surprise here. I did expect for a lower benchmark from the Mediatek phone with 3GB RAM, but I didn’t realise there would be so much of a speed difference in completing Antutu and then a 10,000 point difference in overall score.

The final benchmarks were:

Test 2: Snapdragon 810 vs Helio X10 3 x back to back Antutu Benchmarks

So now we have an idea of how the Snapdragon 810 and Mediatek Helio X10 perform after a single Antutu test, what about if we test the phones 3 times in a row? Will we see any changes in performance? With the Snapdragon 810 exhibit throttling after multiple tests? Watch the video below to find out:

Again we see the LeTV Le Max in the lead, the OnePlus 2 in second place and the Meizu MX5 last, but as we perform additional tests both of the Snapdragon 810 phones see a drastic reduction in performance, while the Mediatek powered phones performance drops only slightly.

We are certainly seeing the Snapdragon 810 protecting itself in these back to back Antutu tests. Performance drops by a huge percentage as the Qualcomm processor tries not to overheat. The Mediatek processor on the other hand only sees a slight drop in performance during the 3 tests.

After seeing these Antutu tests and seeing the final benchmark results for the LeTV Le Max, OnePlus 2 and Meizu MX5 were there any surprises? Are you surprised that the LeTV Le Max came out on top? are you surprised there was such a huge gap between the Meizu MX5 and the two Snapdragon 810 phones? Will these benchmarks affect your next purchase? Let us know in the comments section below.

All 3 phones are available to order through shop.gizchina.com.

Next UK's Wileyfox releases their first devices with Cyanogen OS