Meizu’s MX5 is a fairly impressive device for what it costs, but it seems as though Meizu is keen on getting a device more powerful than that out there.

Its no secret that the company is working on one, too. The upcoming phone, regardless of what it’ll be called (MX5 Pro/Pro Plus?), is quite a bomb. If AnTuTu scores are anything to go by, the phone is quite a powerhouse for it scores a hefty 69,000 points on the benchmarking app!

Codenamed ‘NUIX’, the leaked Meizu phone comes powered by the Exynos 7420 (as seen on the Samsung Galaxy S6) and has 3GB of RAM to go along with it. We’ve heard rumours of a similar Meizu phone but with 4GB of RAM, but considering the potential of this device 4GB might not even be needed. 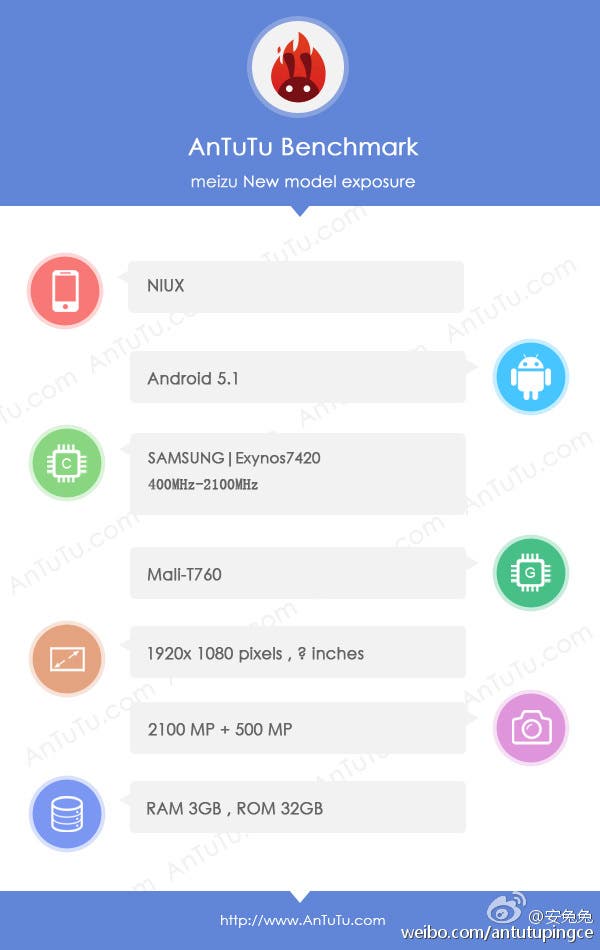 The AnTuTu leak also goes on to tell that it’ll be a 21 mega-pixel camera on the rear of the phone, possibly the same sensor as the MX5, along with a 5 mega-pixel front facer. There’s also a mention of 32GB ROM.

The listing says nothing about the screen size, but does show that it’ll be an FHD screen. Could the ‘NUIX’ have a smaller screen than the MX5? Meizu have a knack of producing offbeat screen sizes and aspect ratios, and the NUIX could be one that features those.

Next Gionee F103 is the first from its 'lifestyle series'