Over the past day or so I have seen a lot of new phones but nothing comes close to the new Huawei Mate S, this is a phone I would happily own myself.

After trying the ZTE Axon Elite yesterday and being throughly unimpressed I was eager to try something a little more exciting. The Huawei booth came a calling and the Mate S jumped in to my hand, what a phone!

Design and size wise the Huawei Mate S is very similar to the OnePlus 2. That’s to say that they are both equally as wide, and long, but the Huawei Mate S is much thinner, and lighter too. Thankfully Huawei have gotten the balance between lightweight and quality right. It’s light enough that you appreciate it, but not to the point it makes the phone feel cheap and unsubstantial. 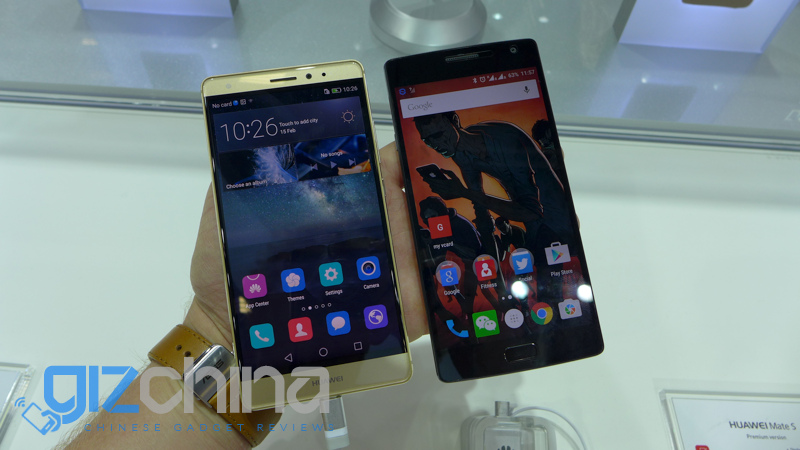 Like all of the current crop of flagship phones, the Huawei Mate S packs a fingerprint scanner (on the rear in this case). There is also a 5.5-inch FHD display, 3GB RAM and a decent camera. Huawei use their own Kirin 935 chipset on the Mate S, it’s a powerful chipset and compliments the premium phone well.

While much of this seems the same as every other flagship on the planet (well except for the exceptionally well made chassis), the Mate S has a few other special features up its sleeve. One of them is the finger-print scanner/gesture sensor. In the gallery and certain other apps you can use the fingerprint scanner to swipe from left to right. Swiping down will open the notification menu and 4 taps will clear the bar of any notifications. The phone is already compact enough for one handed use, and these features help keep your other hand free further still.

The real big features though are to do with the new Smart Knuckle 2.0 and Force Touch elements. Smart Knuckle is actually a neat feature that I can actually see myself using. Basically the system will see the difference between a finger touch and knuckle touch meaning that any screen can use gestures.

From the home screen draw a C with your knuckle to open the camera (or whichever app you have set up to that shortcut) but try the same with your finger tip and the screen will just see it as a regular navigation swipe.

Force Touch seems to be in its infancy still and only a few apps take advantage of the feature. One way you can use it is in the gallery again to zoom in and out on a particular area simple by pressing more or less on the detail you want to see. The other function is a scale! The app allows you to weigh items up to 400g in weight.

The Huawei Mate S might be an expensive phone but of the premium devices I have tried over the year it is one of the best, and I would happily switch my OnePlus 2 for one (an offer the Huawei guys sadly turned down).

Next JiaYu could be the first to offer Android M