The Xiaomi Redmi Note 2 stole the show when it was announced a few weeks back. With updated design and hardware all for the same great low price as it’s predecessor it looks great on paper, so how about in real life? Read our full Xiaomi Redmi Note 2 review here.

Xiaomi’s Redmi range of phones really received a serious boost when the Xiaomi Redmi Note 2 was announced. This was a phone with which offered all the benefits of a Redmi phone, but with hardware on par with some flagships.

After the rather bland and bulky design of the original Redmi Note, Xiaomi have really done a great job of the Redmi Note 2. The Note 2 offers the same size 5.5-inch display, but in a more compact and thinner body than before. Being narrower in both the overall thickness and width of the original Redmi Note helps the Xiaomi Redmi Note 2 feel much more at home in your hand. With the addition of a soft to the touch rear, and much rounder edges the phone is a joy to hold.

Construction is sill based around a plastic covered main chassis with removable rear panel (available only in white at this time), but it remains solid and feels lightweight. A benefit of a plastic build over metal is also the cost. Plastic is cheaper meaning more exciting hardware features can be thrown in at a lower price, but also plastic has a higher yield rate at the factory meaning fewer quality issues and a faster turn around time, further reducing costs. 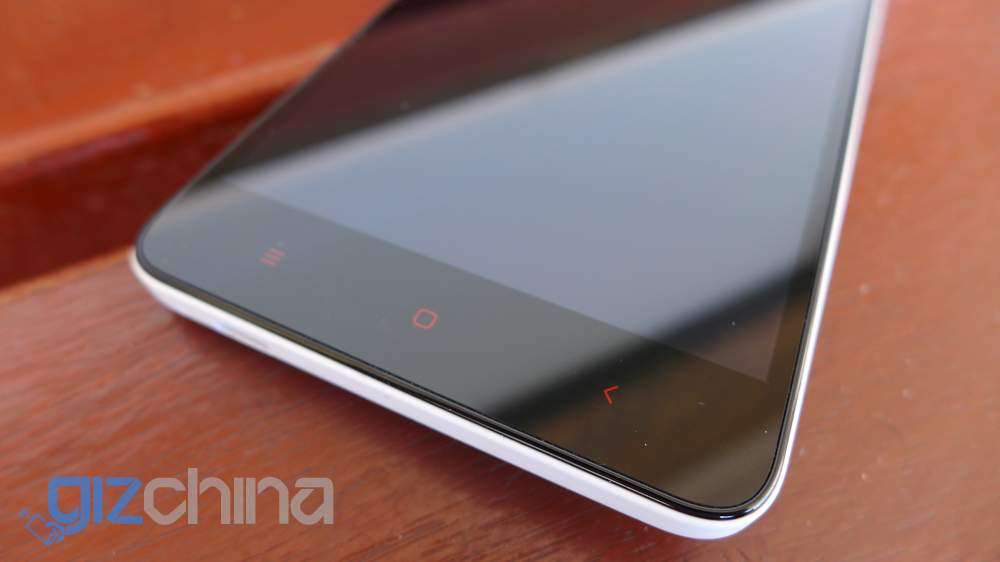 Xiaomi like to launch the white versions of their phones first. With a black front and white rear the Xiaomi Redmi Note 2 has a ‘Panda’ look to it. There is a splash of colour on the front of the device where the hardware navigation buttons get red icons and are backlit with a red LED too.

The front is where the 5.5-inch FHD display resides, and it is nice to see narrower bezels on the Redmi Note 2. As mentioned above this gives a narrower body, and it also helps to give the budget phablet a high-end look. Above the screen is a 5 mega-pixel front facing camera, receiver and the usual sensors. 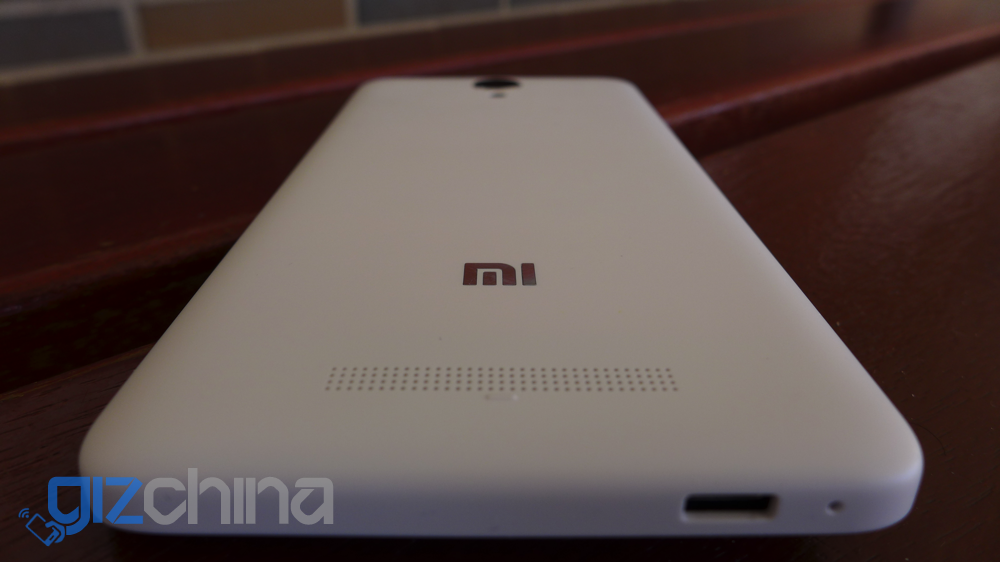 A standard USB port is located in the base next to a microphone. The entire left side of the phone is blank and the power button and volume rocker are found on the right (the same as every Xiaomi phone to date). Up top, Xiaomi have placed a 3.5mm headphone jack and even found room in the budget for an IR blaster. Personally I never use the IR control on any phone, so it is of little benefit to me, but some users find it a great benefit to have.

The rear of the Xiaomi Redmi Note 2 looks like the Mi2 from years back only larger. There is a large lens with 13 mega-pixel PDAF camera behind, single LED flash, Mi logo and large speaker area (similar in design to the Xiaomi Mi4i and Mi4c). Like all Redmi phones the rear panel is removable so you can replace to backs with other colour options, but on a more useful note it also gives you access to the removable 3020mAh battery, dual SIM slots and Micro SD card tray.

In addition to the new design, the Xiaomi Redmi Note 2 also sees a boost in screen resolution. The display is the same 5.5-inch across but it now has a 1920 x 1080 FHD resolution and PPI of 401. Compared to the original Redmi Note this is a great improvement. Text is clearer, and images are more crisp. MIUI has the option to change the ‘temperature’ of the ROM to give you a cooler or warmer feel, but I was left wanting in the overall vibrancy of the screen. That’s not to say the screen on the Redmi Note 2 is bad, but just that I have seen more visually appealing screens on similar priced phones.

Touch response and accuracy are fine on my test unit, but I did notice that the lower portion of the display has a slight yellow tinge to it. I’d like to point out that I didn’t notice this myself and had to visually search for the issue after a reader told me other Redmi Note 2 owners had mentioned it. The yellowing isn’t on the same scale as it was on the OPO, and you would really have to take a good long look to notice. For me it’s a none issue.

Xiaomi managed to find enough money in their budget to really give the Xiaomi Redmi Note 2 an impressive hardware overhaul, and really went to town under the hood. The big news is the inclusion of a 2.0Ghz Mediatek MT6795 Helio X10 Chipset (the Redmi Note 2 Prime as a 2.2Ghz chipset). This is a similar SoC to the Meizu MX5 and the LeTV Le1, and is a proven performer. 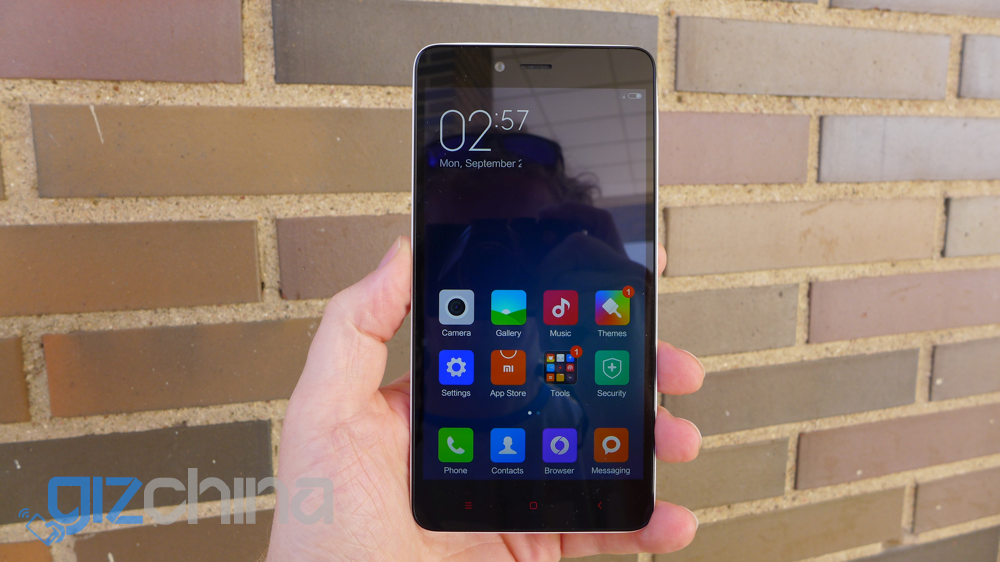 RAM on both versions of the Xiaomi Redmi Note 2 remains at 2GB, but internal storage leaps to 32GB on the prime from 16GB on the standard Redmi note 2. Personally if I was to use my own money to buy the Xiaomi Redmi Note 2 I would choose the standard 2.0Ghz model and buy a large SD card as I am not sure the extra 0.2Ghz of CPU is going to make a whole world of difference to the phone.

Another area where Xiaomi have boosted the parameters of the Redmi note 2 is the cameras. The front camera is a 5 mega-pixel shooter with wide-angle lens and beautification features, while the rear is a Samsung 13 mega-pixel sensor with Phase Detection Auto Focus. On paper this sounds really impressive, but the results (see below) are about average for a phone of this price.

If you remember what hardware the original Redmi Note had then you should have some idea of how the new Xiaomi Redmi Note 2 performs. With either 2.0Ghz or 2.2Ghz of power plus 2GB RAM on tap the Redmi Note 2 runs everyday tasks without issue. Day to day performance is fantastic, even multi-tasking runs well with (just) 2GB RAM available.

Now and then the Redmi Note 2 can struggle during gaming. There will be a slight slow down or the odd jerk or jump. It’s not a regular occuring issue but then again I’m not a heavy gamer. What is more of a concern is the heat. Gaming, or anything else which requires putting the SoC under load generates a lot of heat.

Those odd jerks and jumps in gaming and the unacceptable heat are issues we hope the upcoming MIUI 7 ROM are going to address.

I like that Xiaomi retained the removable battery design on the Xiaomi Redmi Note 2. It means that you an carry a spare with you, and it also opens the possiblity of a longer service time. It’s also good to see a large 3020mAh battery included in the phone. 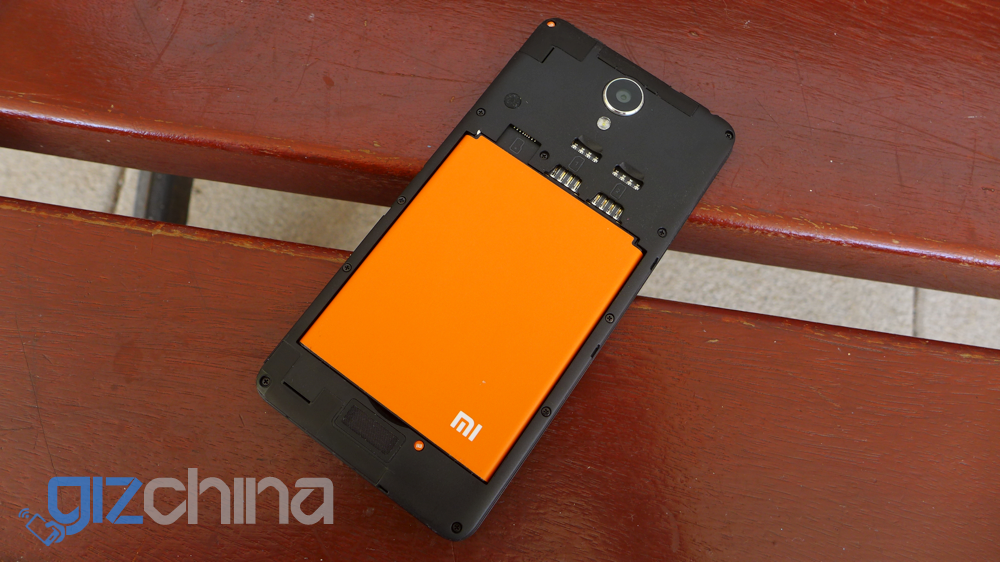 As with the gaming performance and heat, I am hoping that battery performance can be improved with MIUI 7. As it is, you can get the Xiaomi Redmi Note 2 to last a full day of average use, with a screen on time of around 4 hours.

Is this good? Well it depends what you were expecting and what you are currenlty use to. I was hoping for longer, but not being a heavy gamer I can make this battery life work. Still, I hope MIUI 7 can bring better optimisation and squeeze a longer screen on time out of the tank.

To hear the Xiaomi Redmi Note 2 came with an updated 13 mega-pixel PDAF rear camera was a real ‘wow’ moment for me and I was eager to give it a go. Perhaps my excitement and high expectations are the reason why I’m not all that impressed with the camera performance though. With PDAF I was expecting a fast auto focus, and while it is faster than the original Redmi Note, it isn’t fast enough to notice a huge benefit. Actual image quality was average for a mid-range phone. I would say that Meizu have done a better job with camera optimisation, and the the LeTV Le1 is leagues ahead of the Redmi Note 2.

Below are a few Xiaomi Redmi Note 2 photo samples.

It goes without saying that the Xiaomi Redmi Note 2 is a huge upgrade over the original Redmi Note. Xiaomi have managed to give the Redmi Note 2 a much more pleasing design, powerful Helio X10 processor, PDAF rear camera, higher resolution display and some neat features like dual SIM and an IR remote. But a lot has changed in the Chinese smartphone world since the original Xiaomi Redmi Note launched and the Redmi Note 2 only addresses some of that change. The design and hardware are a huge improvement, but the user experience and performance (camera, gaming battery performance) are all below expectations. Just as the Mi4i looked killer on paper and failed to impress due to poor optimisation, the Redmi Note 2 also falls behind the competition.

There is still potential for the phone. With an update to Xiaomi’s latest MIUI 7 we could see better gaming performance, better image processing and longer battery life, but then again we might not.

The Xiaomi Redmi Note 2 is available through shop.gizchina.com