The Zopo Z Watch is a first for Zopo, and another hint that the brand is making steps to change its image. After issues over the past few years, the company is hoping to get back to its previous grandeur with new phone releases, open source policies and official releasing phones in international markets. 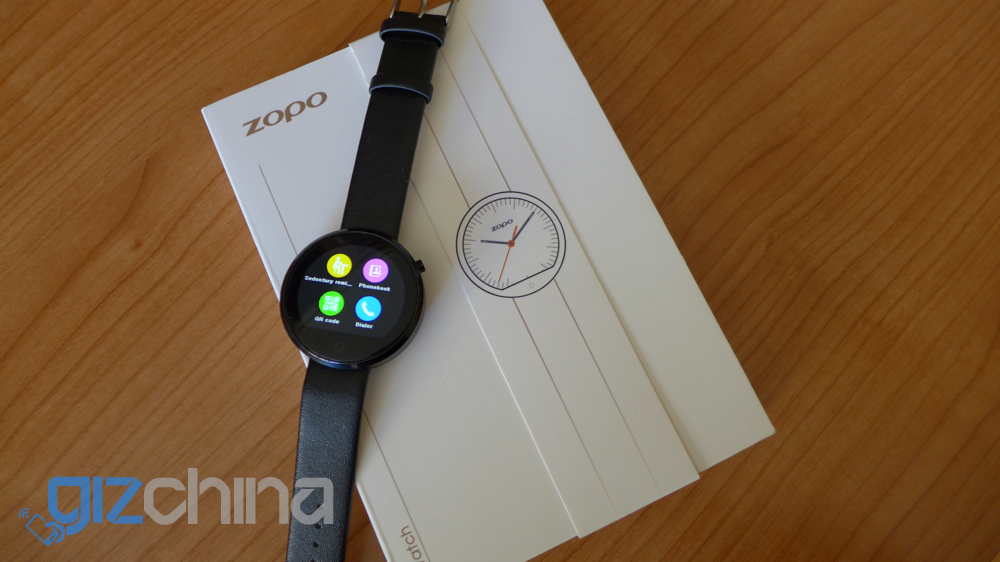 When I first saw the Zopo Z Watch in press images I mind was immediately flooded with thoughts of the InWatch wearable. If you don’t recall, InWatch was a wearable maker who signed up to work with Meizu, but ultimately failed to make anything of themselves and disappeared from the public eye. Thankfully the Z Watch isn’t the same device as the InWatch, and is a much more advanced wearable. 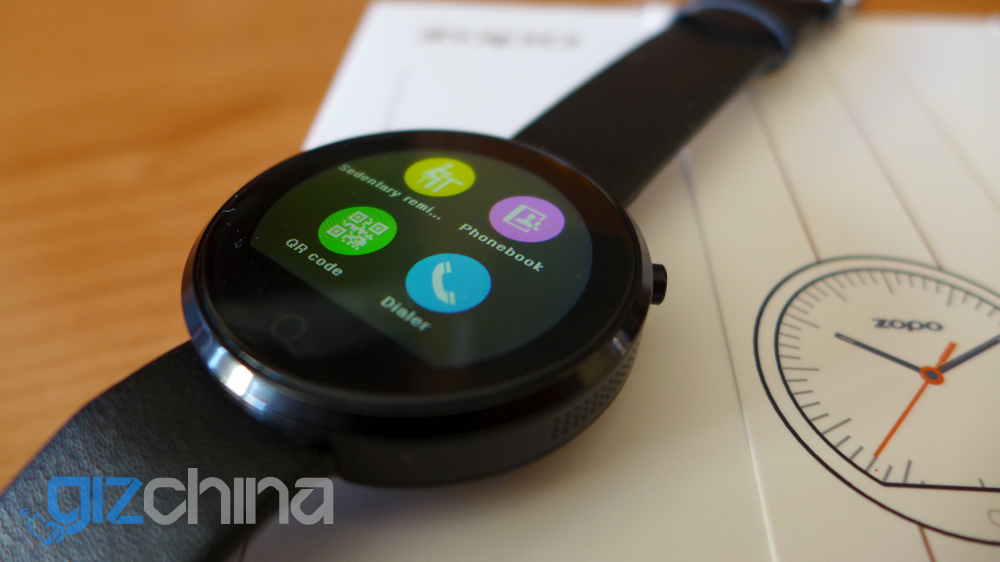 First of the Zopo Z Watch has a colour touch display for navigating through the various menus. The panel measures 1.22-inch with a resolution of 240 x 204. The majority of the display is round with just the very bottom of the screen cut off with a flat section. The design is similar to the Moto 360 and the flat area creates a chin where a small ring is found. Originally I thought that this was a home button, but it doesn’t seem to do anything. 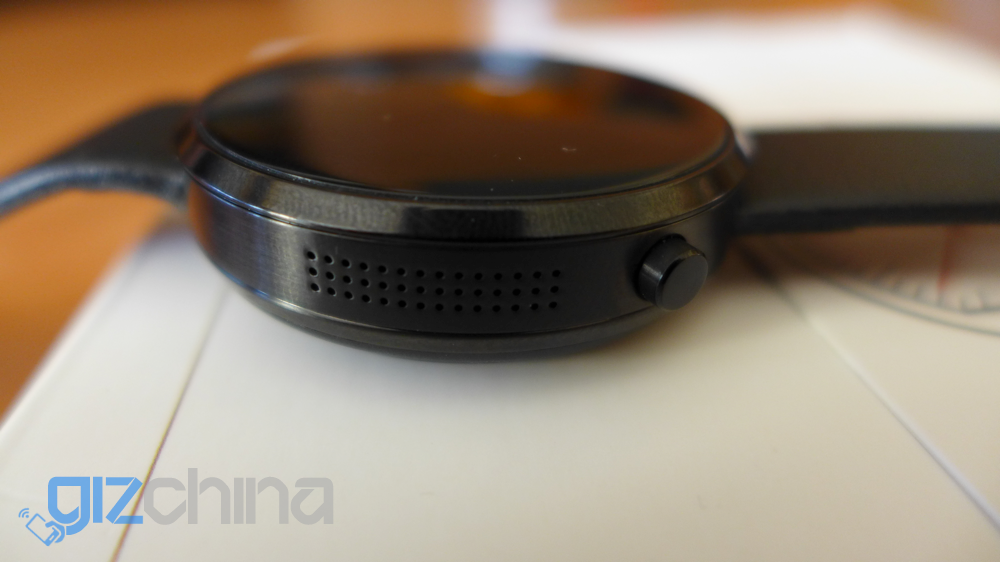 The glass is cambered for a curved finish and fits nicely in to the black alloy main body. Looking at the official Zopo specifications a silver and gold version are also available. A beveled edge takes the shape of the watch on to a chunky flat edge where a microphone, speaker grill and physical button can be found. 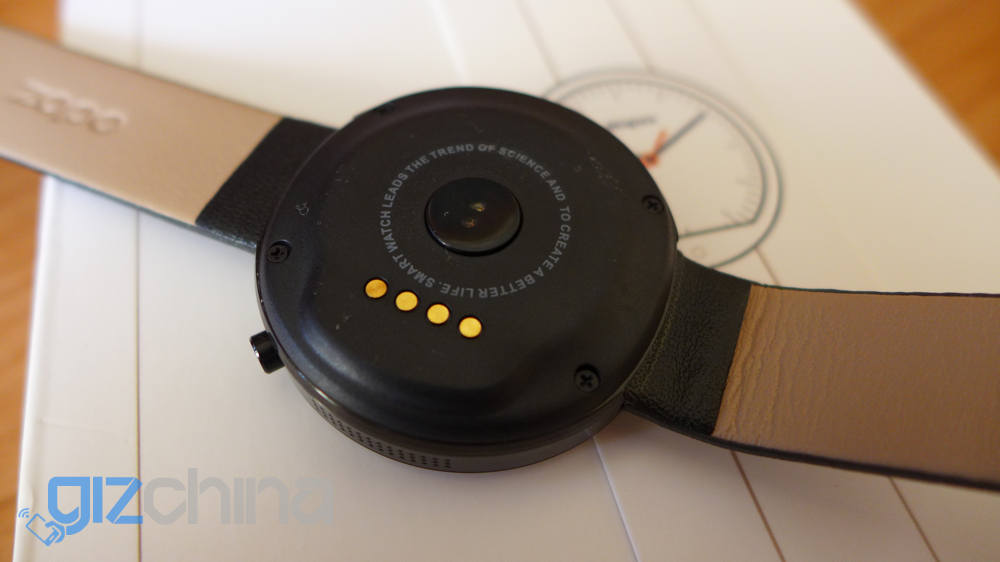 Turn the Z Watch over reveals a 4 pin connector which attaches via magnets to the included charger cable, and heart rate sensor. The rear is plastic and fastened to the main body with 4 x small Philips headed screws. There is no mention of water proofing on the official Zopo Z Watch page , and I haven’t tried it in water, but my gut feeling says you had better keep it away from moisture. 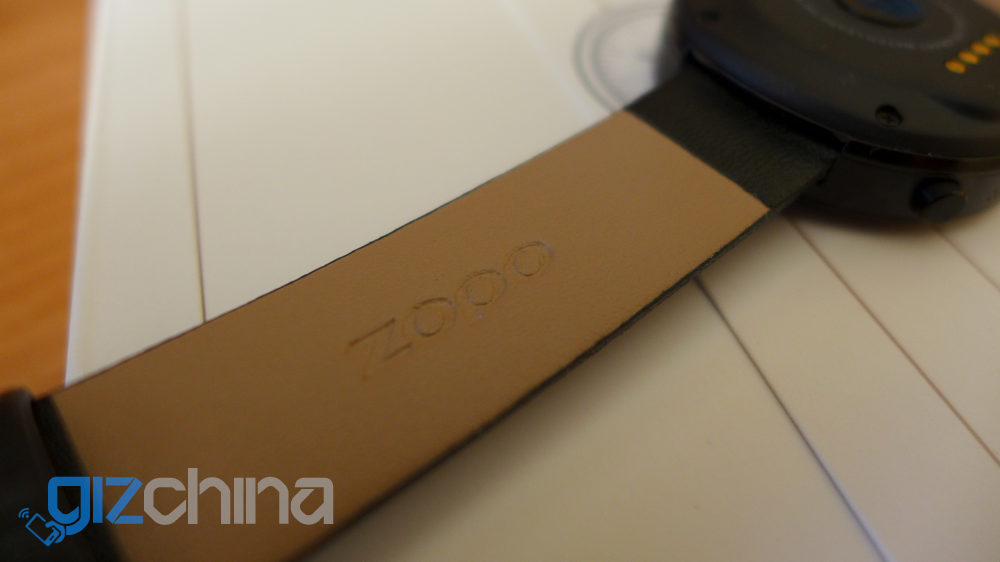 The whole device fastens to your wrist via a narrow leather look strap. The strap is a little a little cheap and feels like plastic, but it holds the watch on securely and overall the wearable is much more comfortable than some of the heavier, bulkier models offered by other brands.

I’ve already mentioned the colour display, but I’ll go in to a little more detail here. Imagine that someone had programmed an 8 bit video game system to show a watch user interface. Imagine how blocky and pixelated the icons would look. Do you have that in your mind? Good, that’s how he UI looks on the Zopo Z Watch. 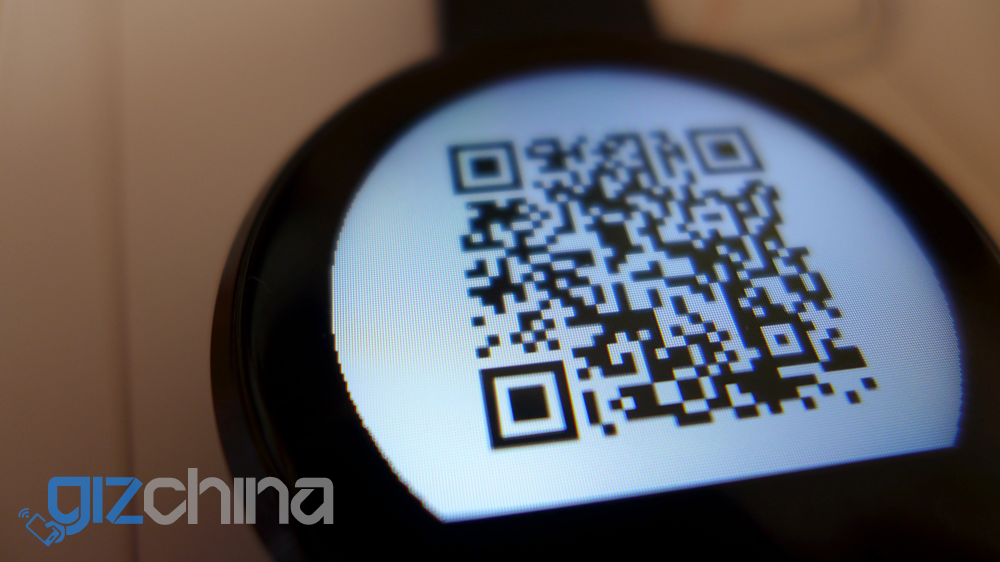 One of the first things you need to do with the Z Watch is open the built-in QR icon and download the APK for your Android phone (there is also an iOS version but I didn’t have chance to try it). The QR is shown on a white background that looks like it was drawn on a very basic version of Microsoft paint. The poor screen resolution also means that text looks untidy and icons are pixellated. You might think we are being picky, but at an RRP of almost $100 I was expected a much better screen.

Under the display and at the heart of the watch is a Mediatek MTK250A chipset, 128MB RAM and 32MB memory. Not much memory for the money considering there are wearables from No.1 and others that have enough storage to keep music on your wearable. 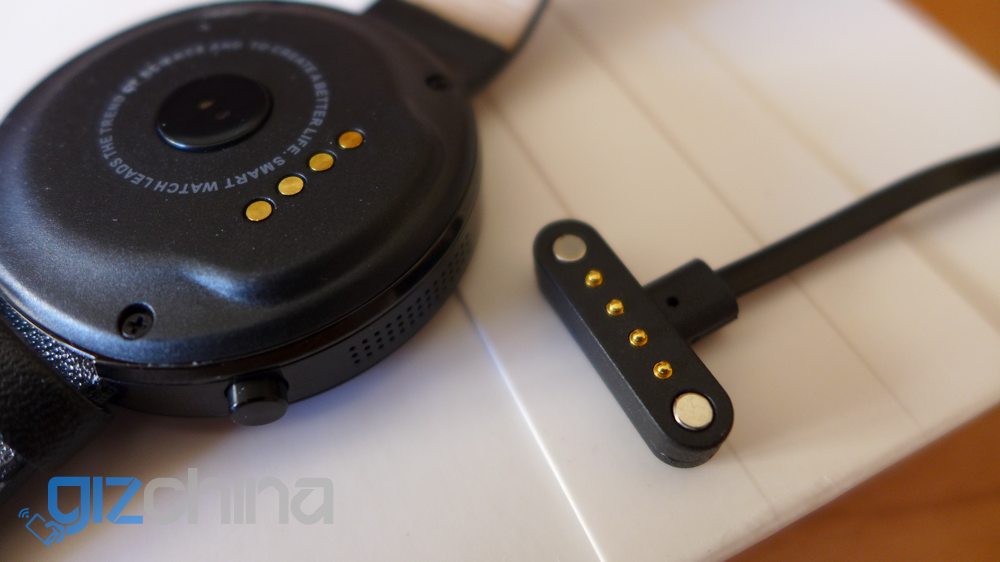 A rechargeable 320mAh battery is built-in and charges via a special magnetic cable that can only attach one way round on the 4 metal tabs. The quality of the wire on the charging cable is rather cheap, and I don’t understand why a dedicated dock wasn’t included with the wearable. As it is the magnetic cable works, but the magnets are weak and it is very easy to accidentally disconnect while charging.

Bluetooth 4.0 is inside to connect to your Android or iOS device, and like many other wearables the Z Watch can alert you of notifications, messages and calls. A built-in microphone means you can even answer and chat through your watch when answering a call on your connected device. 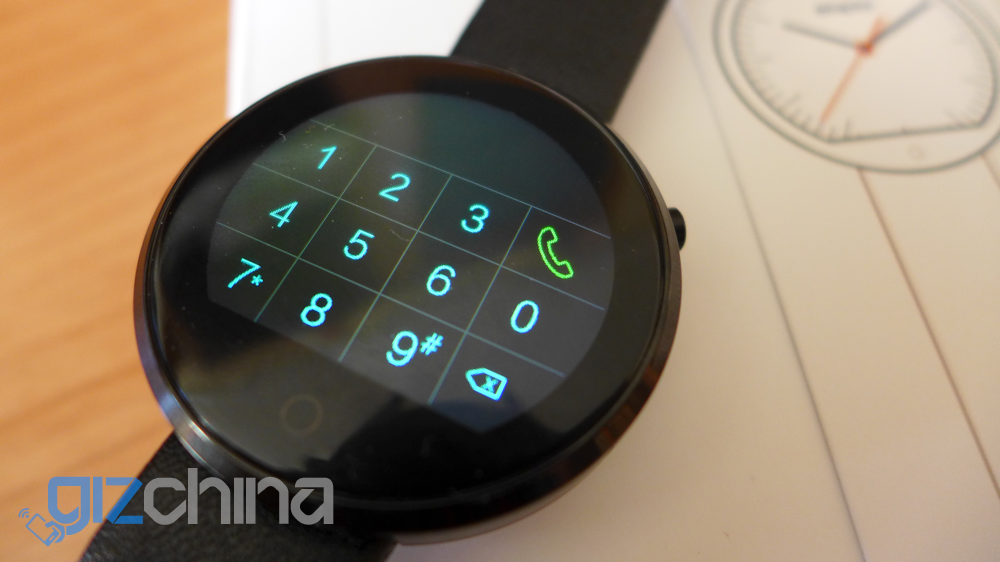 In the Z Watch UI there are options to take remote control of your phone camera, a ‘find my device feature’, contacts list, phone dial pad and an option for activating SIRI if you have an iOS device. 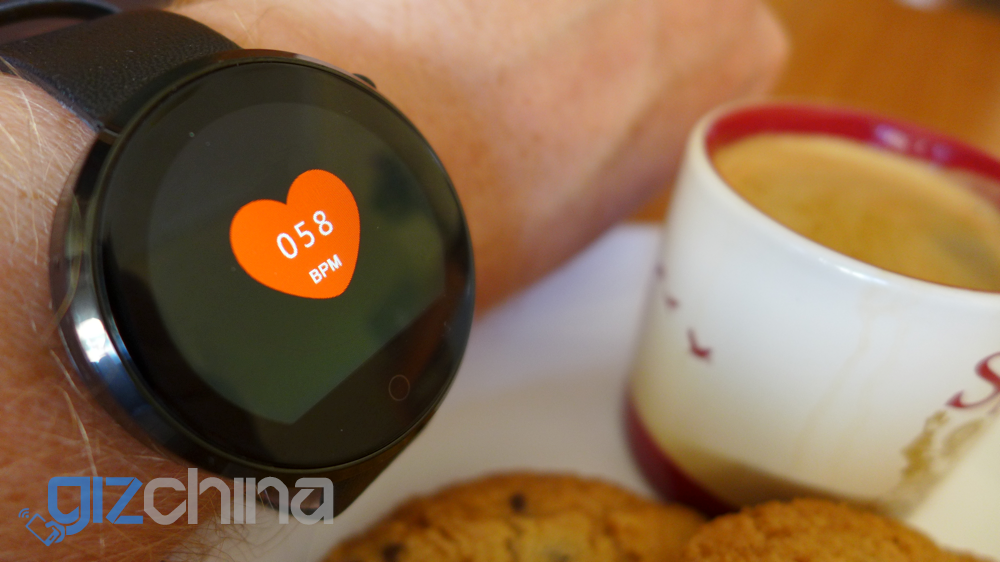 There are other features too. An optical heart rate monitor on the rear of the watch case should be able to read your pulse and keep a record of it for you to keep track off. There is also a pedometer than can be set with a daily total steps goal and sleep monitor. Of those 3 features, the heart rate monitor rarely worked (either the watch is faulty or I have a serious lack of heartbeat), the pedometer is very inaccurate and the sleep monitor is hit and miss.

Checking online the Zopo Z Watch retails at around $96. In comparison most other Chinese made wearables with similar features cost around $30 – $70, and my brother recently purchased the Asus Zenwatch for just $150. The Zopo Z watch is overpriced, under spec, and the features don’t work well. On the plus side, the screen is a pixel artists retro dream, the Z Watch is comfortable, and … well that’s it. 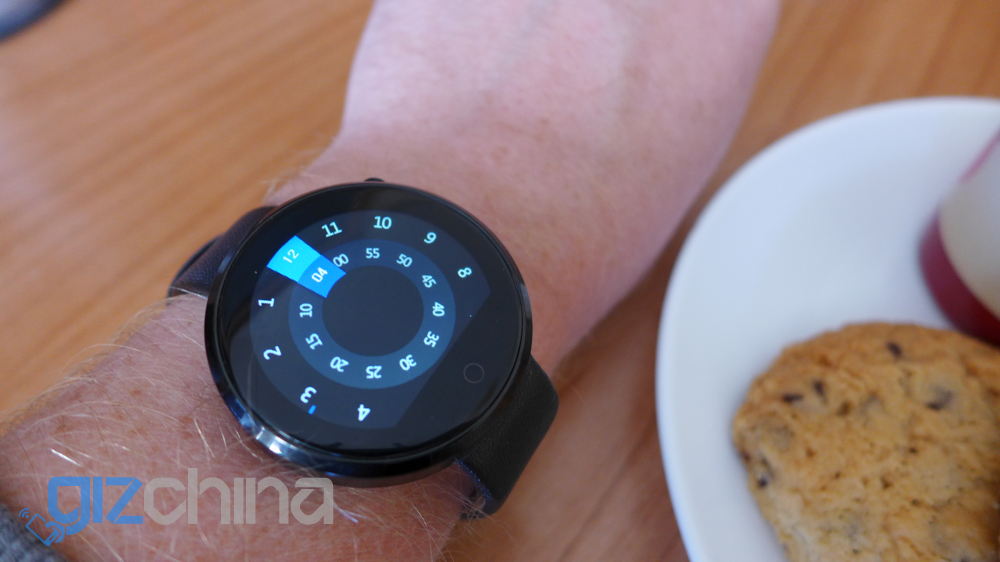 Wearables, even Android Wear models, are still a new technology and companies are still figuring out exactly what they should be able to do, how they should look and how much people are willing to pay for them.

The Zopo Z Watch is a very early wearable device, one to avoid, but that’s not to say future incarnations of the wearable will be as equally bad.

Next Hey! Where are iOcean?