ZUK bosses have confirmed that the ZUK Z1 will receive an Android 6 update soon, but before international users start to rejoice remember that the Chinese phone runs ZUI not CM.

ZUK are updating ZUI on the Z1 with a new OTA that brings fixes and solves stage fright issues. The announcement of the update was shared on ZUK bosses Weibo accounts who at the same time confirmed that Android 6.0 is coming to the device ‘soon’.

This is quite exciting, well at least for Chinese user of the phone running the native ZUI rom. Android 6 might be on the way to the Z1 but the release that has been teased will be based on the heavily customised ZUI ROM. International users of the phone will have to wait for Cyanogenmod to build an Android 6.0 based CM release for the phone. 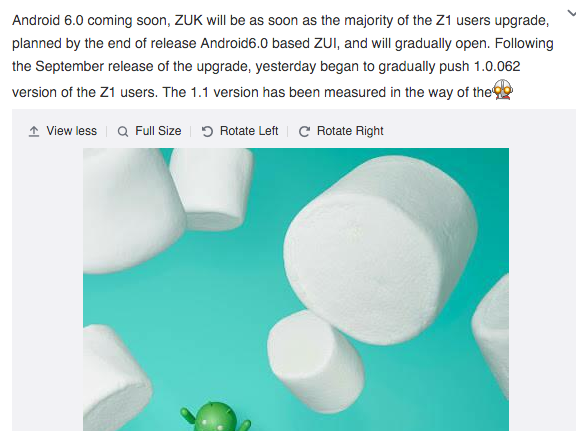 Im sure you are all waiting for my full review of the ZUK Z1, and some of you may have seen that I managed to brick my device (totally my fault). A new grey version of the phone is on the way now, and a full review will be complete ASAP, along with the Xiaomi Mi4c and Ulefone Paris reviews.

Previous ZTE 3C is a $75 Snapdragon phone with pretty looks