Vivo’s phone’s are generally more expensive than their counterparts, but there’s no denying that the company does take care of the quality on their phones.

While their recent Snapdragon 615 phones might not have been the most impressive devices around (read: the Vivo X5Pro review), it does look like the company has learnt its lesson and will be back on track soon.

The upcoming Vivo X6 has been confirmed to have 4GB of RAM. While that in itself might be music to Vivo enthusiasts’ ears, there’s something more interesting being said about the Vivo X6: that out of the 4GB RAM, 1GB will be dedicated for graphics.

If that does happen, it’ll make the Vivo X6 the world’s first Android phone to have dedicated video RAM. You’ve only seen that on desktops and laptops up until now. The teaser also confirms 4G LTE connectivity.

Vivo seem keen on giving their buyers complete multimedia entertainment, whether it be a high-end audio chip, good camera, or, as it turns out now, dedicated video memory. As for the chipset, word is that it could be a MediaTek MT6797 Helio X20 deca-core SoC, but there’s no confirmation yet. Here’s hoping Vivo don’t stop with the X6 teasing anytime soon! 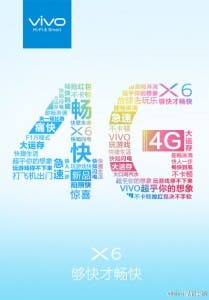