UMi updated their original UMi Iron to pro spec with the UMi Iron Pro, so does this latest version of the phone fulfill in it’s promises, features and hardware?

The original UMi Iron launched earlier this year and was the first 5.5-inch FHD phone from UMi to get the all alloy treatment, it also promised a bunch of health features, security features and audio enhanements but didn’t quite meed expectations. Does the new updated UMi Iron Pro build on where the old model fell short? Find out in our full UMi Iron Pro review.

If you ever saw or got your hands on the original UMi Iron then the design of the UMi Iron Pro will come as no surprise. Physically the only changes between the original and the UMi Iron Pro is the inclusion of a single touch fingerprint scanner on the rear. The addition of the fingerprint scanner means the phone has 3 biometric security options (more on this below), and the inclusion of a type C USB. 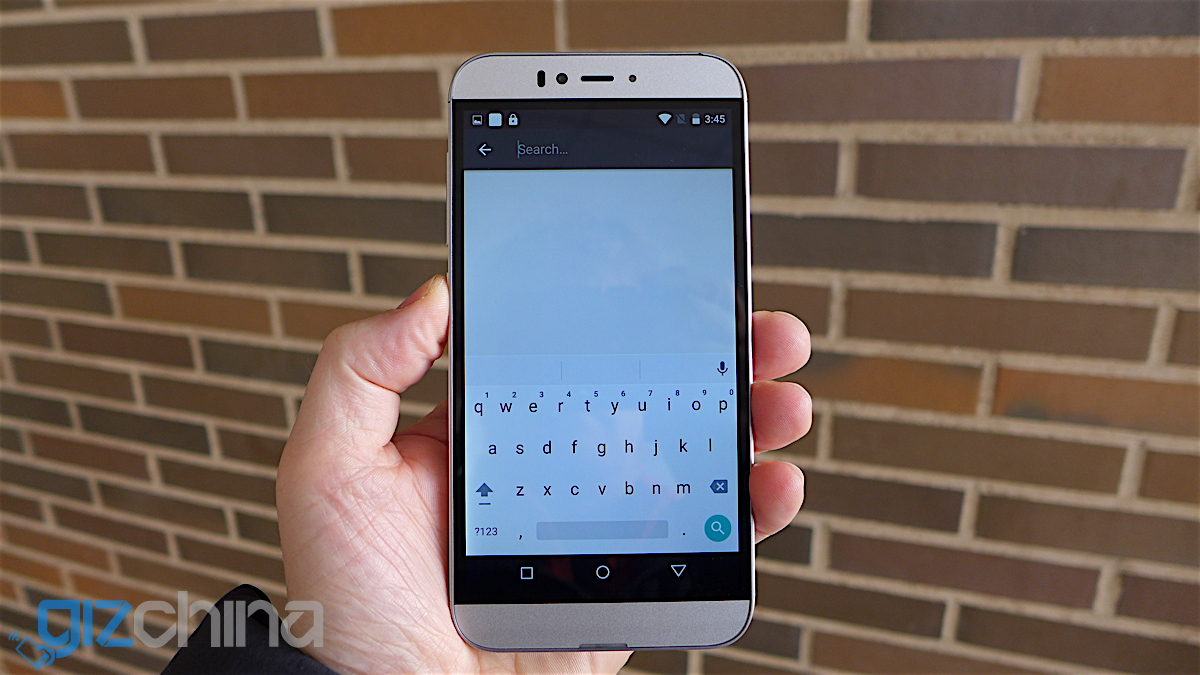 From the front the phone has a 5.5-inch FHD display with slim black bezels around the screen that run all the way to the very edges of the phone. This gives the impression of a bezel-less design and we have seen this design style in a large majority of 2015 Chinese phones. For the UMi Iron Pro the black bezels are around 3mm thick all around the panel, so smaller than some phones. 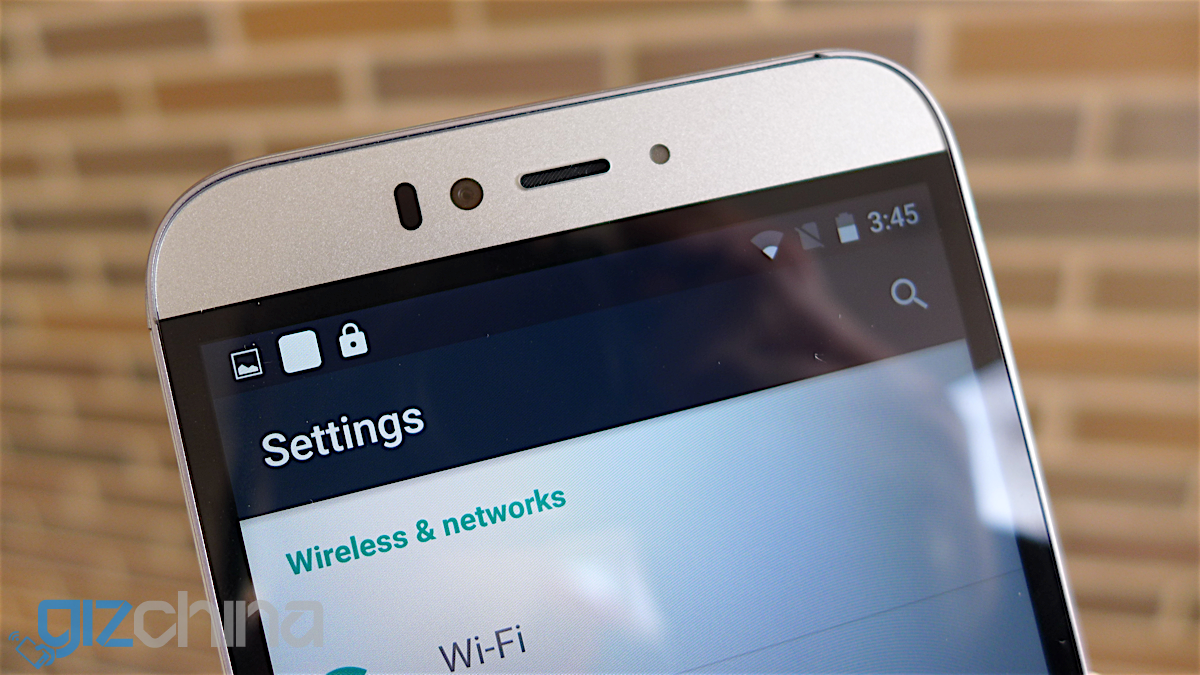 Above the display we find an 8 mega-pixel camera, with single LED flash. The front camera can be used to set up an eye print unlock features, and to the left there is a sensor for taking your pulse for the Uhealth app. Beneath the display is a silver chin with small LED light bar which is used to notify you of calls, battery and charge status. As you can see there are no capacitive buttons on the phone so we rely on on-screen controls for navigating through Android.

The sides and rear of the phone are made in to 3 pieces. There are plastic caps at the top and bottom with an alloy panel taking up the middle section. These plastic areas are used to prevent interference with the antennas. It’s nice to see that the fit between the panels is better on the Iron Pro, but it’s still not up to the level of other Chinese phone makers. The sides of the phone taper in slightly towards the display meaning that the rear of the phone is slightly wider than the front. Along the left we find the power button and volume rocker, and on the right a SIM tray. 3 cross head screws attach the panel to the phone. The top of the phone has the 3.5mm headphone jack, while the base has a Type C USB. 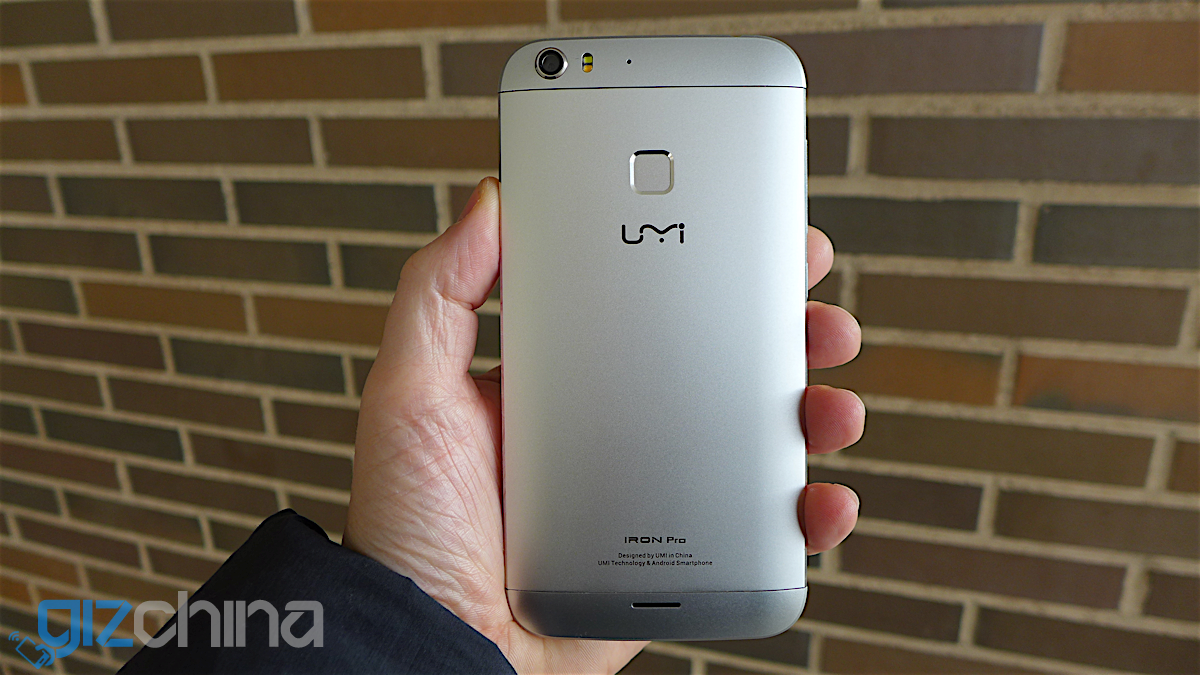 On the rear, starting at the top, we find a 13 mega-pixel main camera with dual tone, dual LED flash. Then the single touch fingerprint scanner, UMi logo, Iron Pro name and finally a single speaker hole. 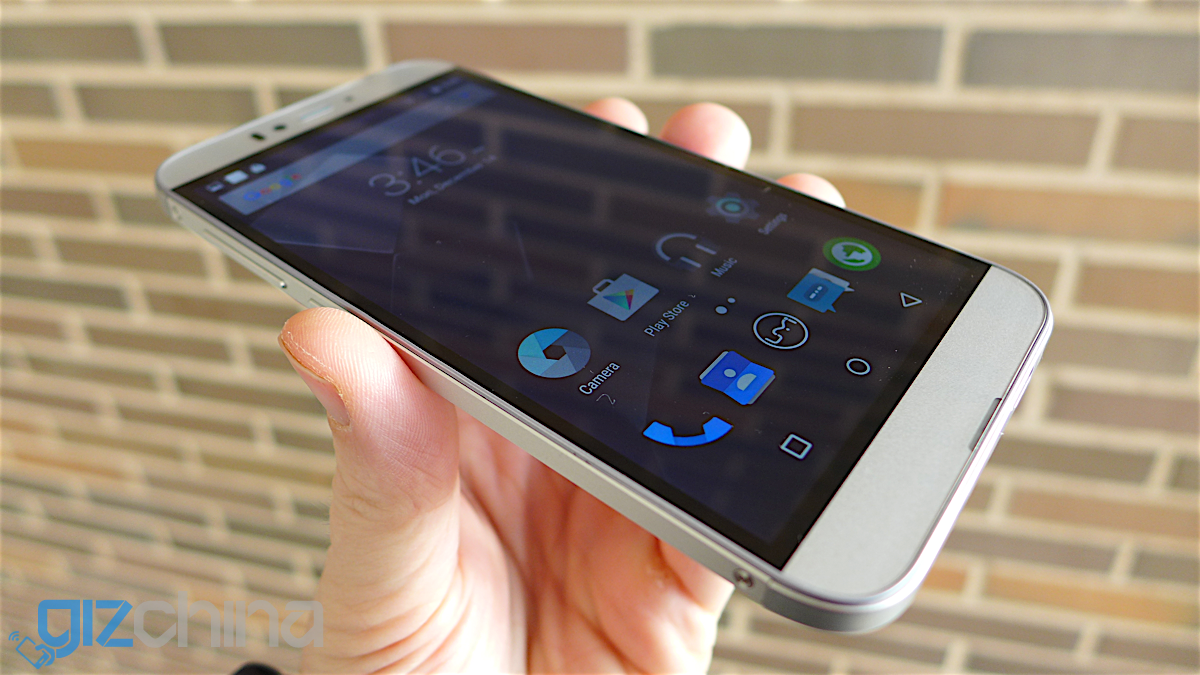 That 5.5-inch FHD display is actually rather nice. The OGS panel offers good viewing at all angles and brightness isn’t bad. No issues with the display really, but if you compare it too other UMi phones, the UMi Emax Mini for example, it isn’t as vibrant. Above the display is that pulse monitor. When I had the original UMi Iron I could never get this feature to work, but on the Iron Pro it works right out of the box. Just how accurate or useful it is is another question. With wearables being so cheap (like the Mi Band) it seems a little unnecessary to have this feature built-in to the phone.

Moving across the top is the front facing camera 8 mega-pixel camera which also double tasks as an Eyeprint ID feature. From the security settings you can chose Eyeprint ID Unlock where you will be guided through the set up process. It takes a minute or so for the phone to register your eyes and once set up the Iron Pro can then unlock after a scan. In theory it is a cool feature, but in practice it is very slow and takes about 20-30 seconds to decide if you are allowed to open the phone or not.

If you have the eye scan feature on then the fingerprint scanner won’t be active, you will also have to swipe the display to get the eye scanner to kick in. I also tried the scanner with my wife and children to see if it would unlock for them, but the Iron Pro stayed securely locked. 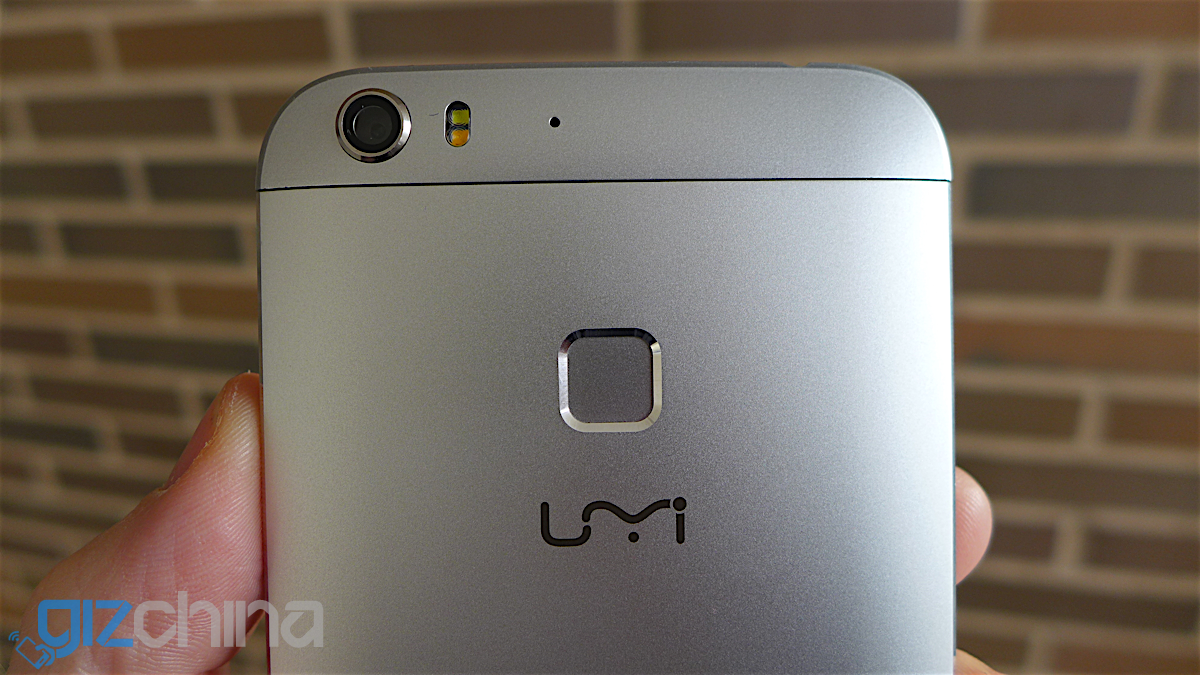 The fingerprint scanner is good, again it isn’t fast to set up, but once set up it reads and unlocks accurately and is quick, not fast but fast enough. It’s a one touch feature meaning that even if the phone is asleep you don’t need to first wake the phone before scanning. The final security feature is the voice unlock feature, again once you have it set up (with a 3-6 syllable phrase or word) you must swipe the display to get the microphone to start listening and then you speak your phrase. You might think speaking a password in to your phone seems like a dumb idea, but even if someone hears you they would need to have a similar voice to you for it to register with the phone (I tested it).

Along the bottom of the phone is the notification beam, this is an RGB item so you can choose different colours for missed calls and missed app notifications, for charging and a low battery though you can only have the default Red light, or choose to turn it off.

As I already mentioned the UMi Iron Pro and UMi Iron are almost identical except the fingerprint scanner and the Type C USB. For the Iron Pro Type C really doesn’t add any benefit to the phone other than you can use the plug either way round. More expensive phones also feature faster data transfer etc. Other hardware details are all under the hood and include a Mediatek MT6752 1.3Ghz octacore processor, 3GB RAM, 16GB internal memory, 3100mAh battery, and a SIM tray that will accept either dual SIM cards or a SIM and SD card. UMi also include Vipor for Android on the UMi Iron Pro. This app is designed to improve the audio performance of the phone and which it does but there is a hardware issue with the phone that makes the the sound pop and crackle when using the Pro with earphones. This issue was present with the original UMi Iron, so it’s a shame that it hasn’t been fixed on the updated handset.

The 13 mega-pixel rear camera is a Sony IMX214 sensor, that’s a solid camera and we have seen what it is capable of on numerous other phones. Compared to other IMX214 phones the performance is a little behind and generally images look a little dull.

There are much worse cameras on phones, but I was hoping for a little more from the 2nd generation UMi Iron. 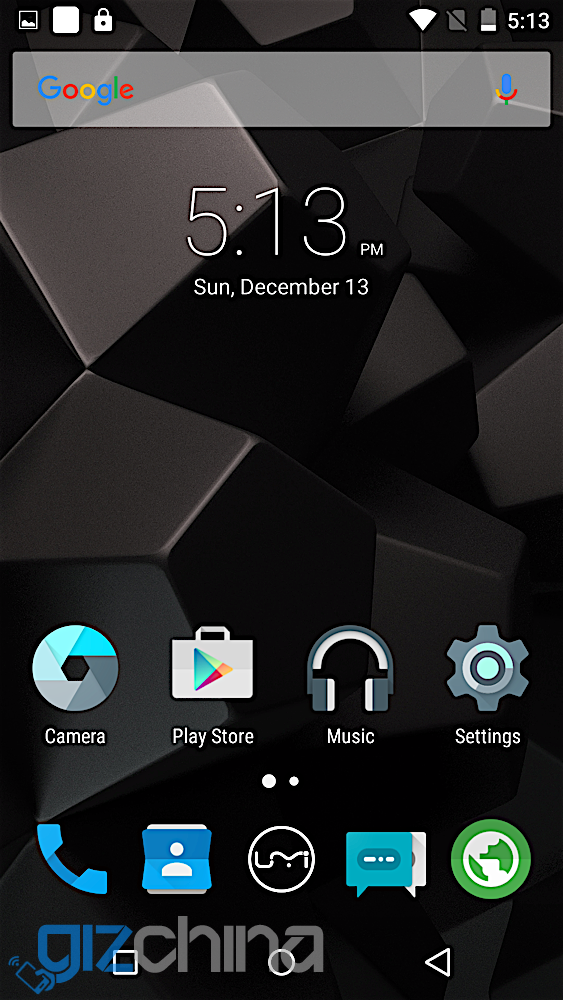 The ROM on the UMi Iron is one of UMi’s own, so its the same as the UMi Fair, but different to the ROM on the eMax Mini. The system itself is based on Android 5.1 Lollipop with some changes thrown in to the app icons, and the settings (the additions for security and the LED notification beam).

I’ve experienced issues turning the phone on, sometimes it simply stalls at the UMi logo at boot up (switching it on and off fixes it). So far I haven’t had an update for the phone, but it doesn’t look like the Iron Pro supports OTA updates and you will have to use the Rootjoy app.

Compared to the UMi Iron the Pro adds a fingerprint scanner, Type C USB and a working pulse reader, but the rest of the phone (including the issues with the audio) is all the same. UMi will sell the UMi Iron Pro for around $169 (we think) at that price you could buy the Xiaomi Redmi Note 2 which has a more powerful Helio X10 chipset, PDAF rear camera and guaranteed MIUI updates, on the other hand the Iron Pro has a metal body and fingerprint scanner.

However if a metal body, fingerprint scanner, and health apps are important to you then check out the UMi Iron Pro, but keep an eye on the updates to see if the camera gets sorted.

Next List of Lenovo devices getting Android Marshmallow leaks online