Xiaomi go all alloy and add a fingerprint scanner for the first time, so how have they done? Find out in our full Xiaomi Redmi Note 3 review.

Xiaomi made a change to the Redmi launch schedule this year by first launching the Xiaomi Redmi Note 2 then the Xiaomi Redmi Note 3. The faster than usual launches are obviously to help Xiaomi compete against Meizu’s constant bombardment of phone launches and also what LeTV have on sale, but it is also to offer Xiaomi fans the option of entry-level and flagship Redmi Note devices.

The Redmi Note 3 is the first Xiaomi to get an alloy body and the first to receive a fingerprint scanner. Most brands would normally bring new features to their range with a flagship phone (in Xiaomi’s case the Mi5), but Xiaomi do like to do things a little different (remember the Mi2a? The largest Xiaomi at the time and also one of the most affordable). 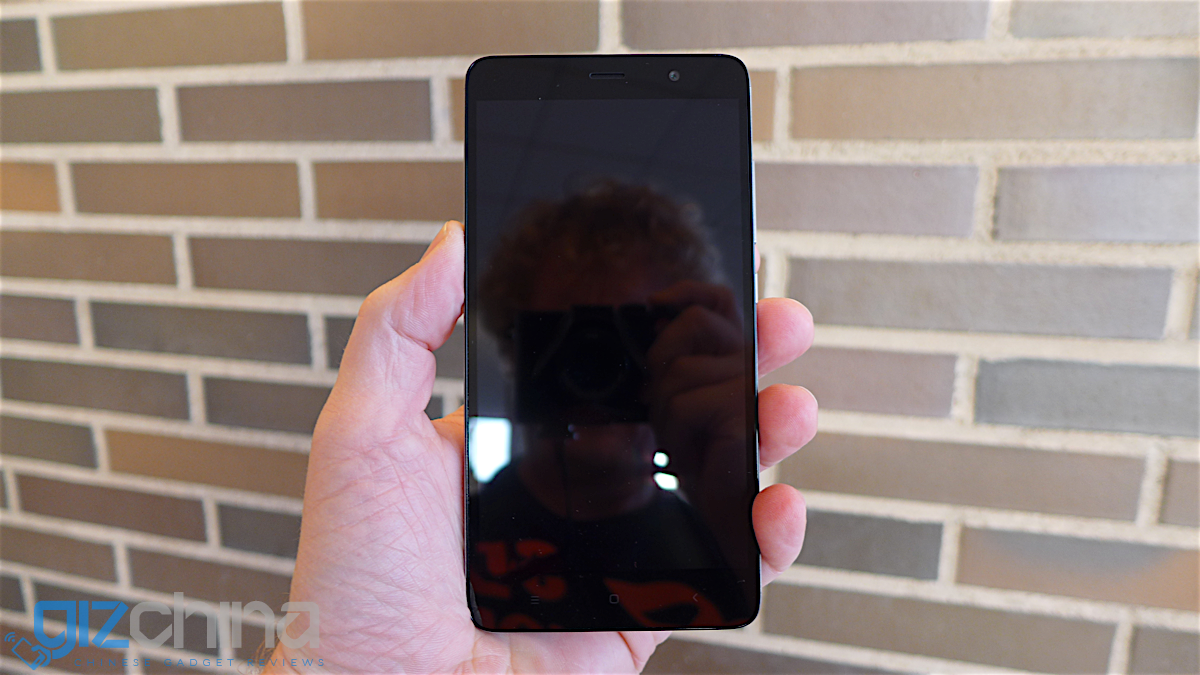 Although Xiaomi have changed the build form plastic to alloy on the Redmi Note 3, they have still kept the classic Redmi look on the face. The grey metal bodied phone has a black face with standard black bezels (no hidden borders) simple navigation controls on the chin and a front facing 5 mega-pixel camera at the top. 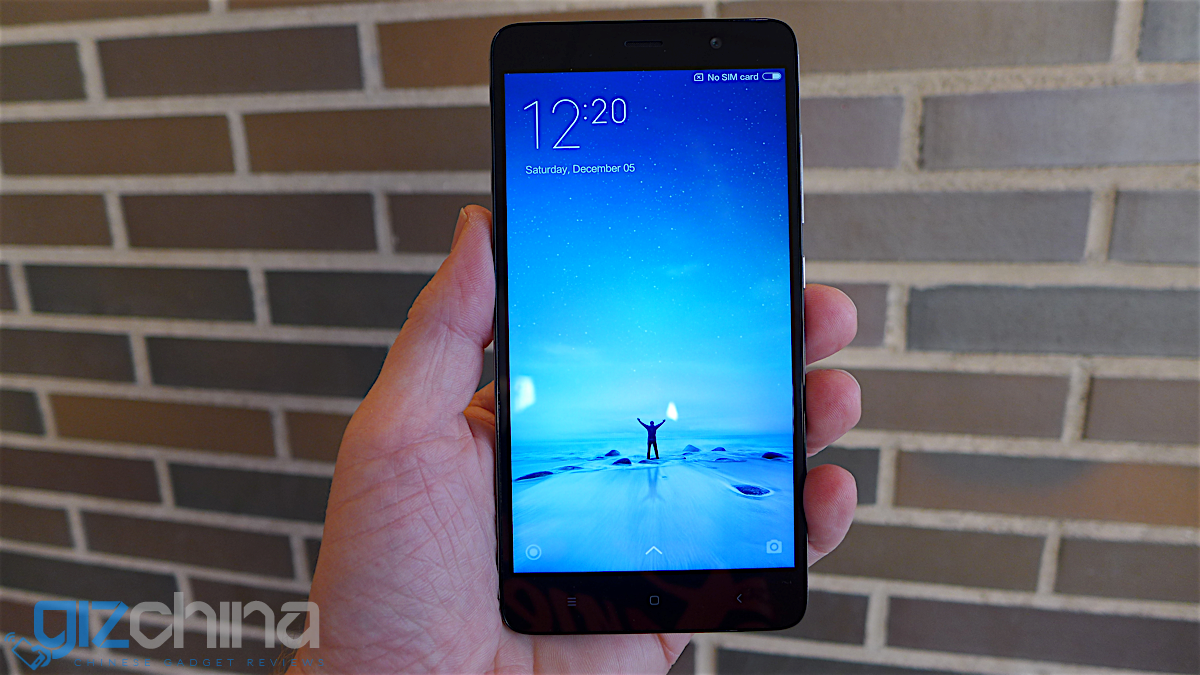 The 5.5-inch FHD display might have the same dimensions and the same 1920 x 1080 resolution as the Redmi Note 2, but there are differences. We discovered in our Xiaomi Redmi Note 2 vs Redmi Note 3 comparison that the newer phone has a whiter display (see the video below).

So while the front of the Redmi Note 3 can be described as traditional, then the rest of the phone is new, well at least it is for Xiaomi. 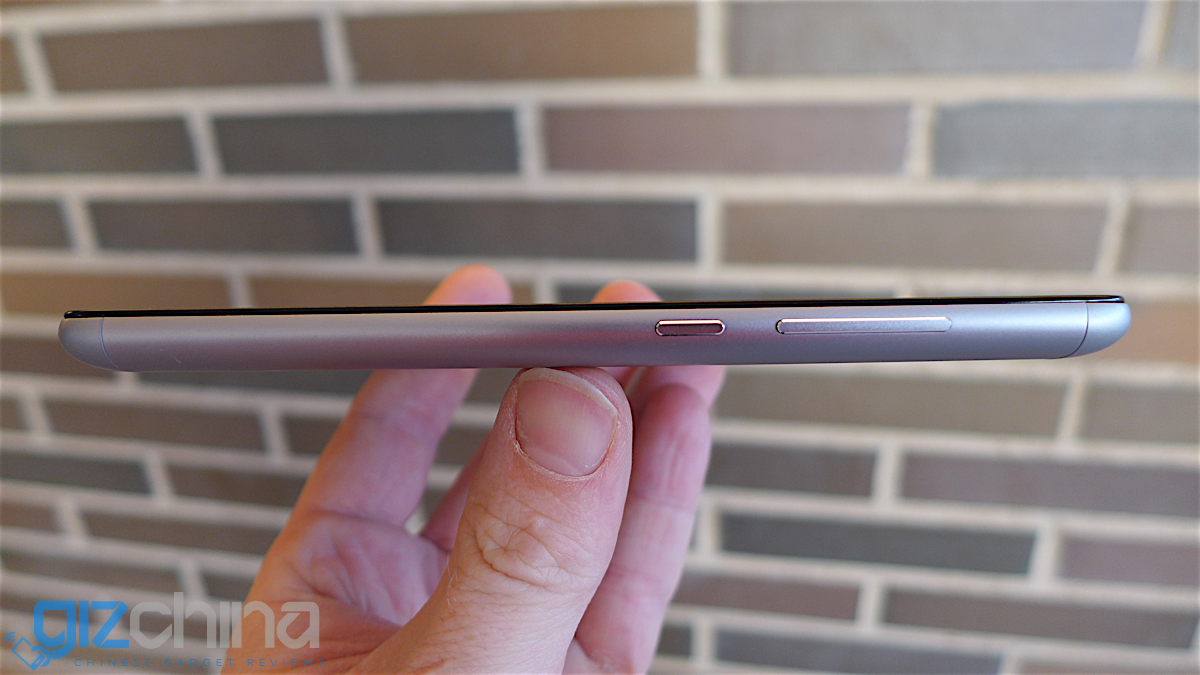 Power and volume controls are kept on the right side. A 3.5mm headphone rack and IR remote are located at the top. SIM tray on the left and a standard micro USB in the base. This is all pretty standard fare for a Xiaomi phone, but the SIM tray on the Redmi Note 3 means that there is only support for dual SIM and no space for a micro SD card. 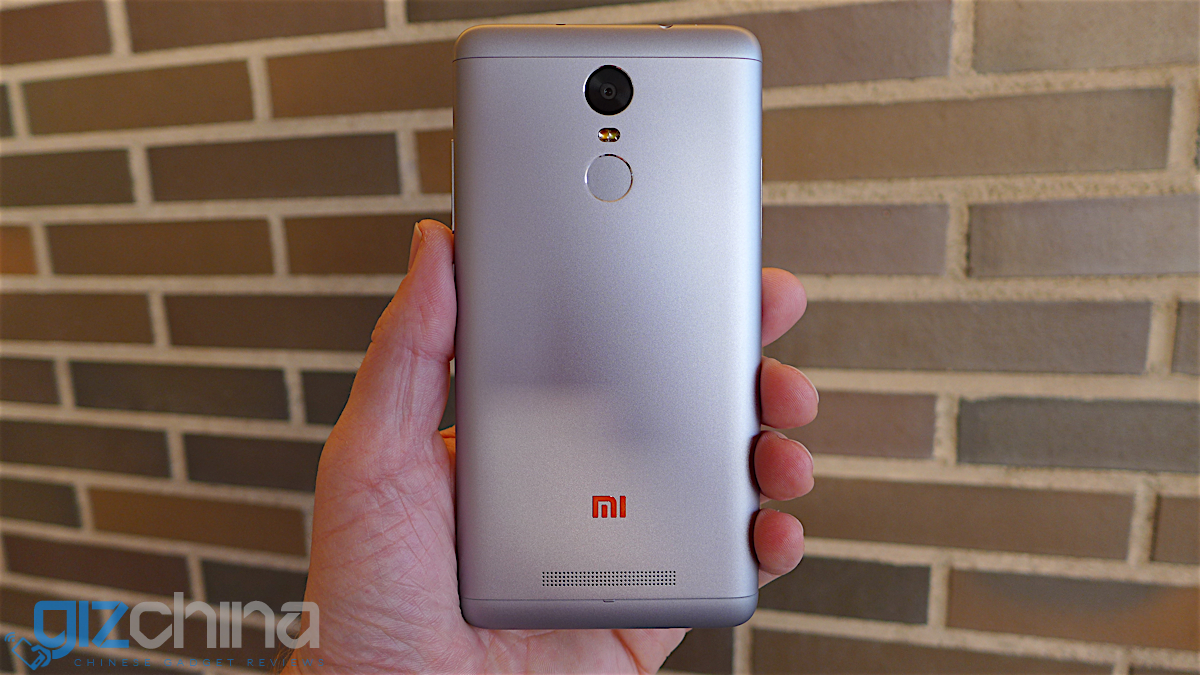 Turning the phone over to the rear is where we see most of the physical changes of the new Redmi Note 3. Here we see the alloy and plastic rear of the phone. Yes, the center section of the phone is alloy while the top and bottom are simple plastic caps (to prevent WIFI and LTE interference. UMi uses a similar construction method, but Xiaomi do it well with great fit. 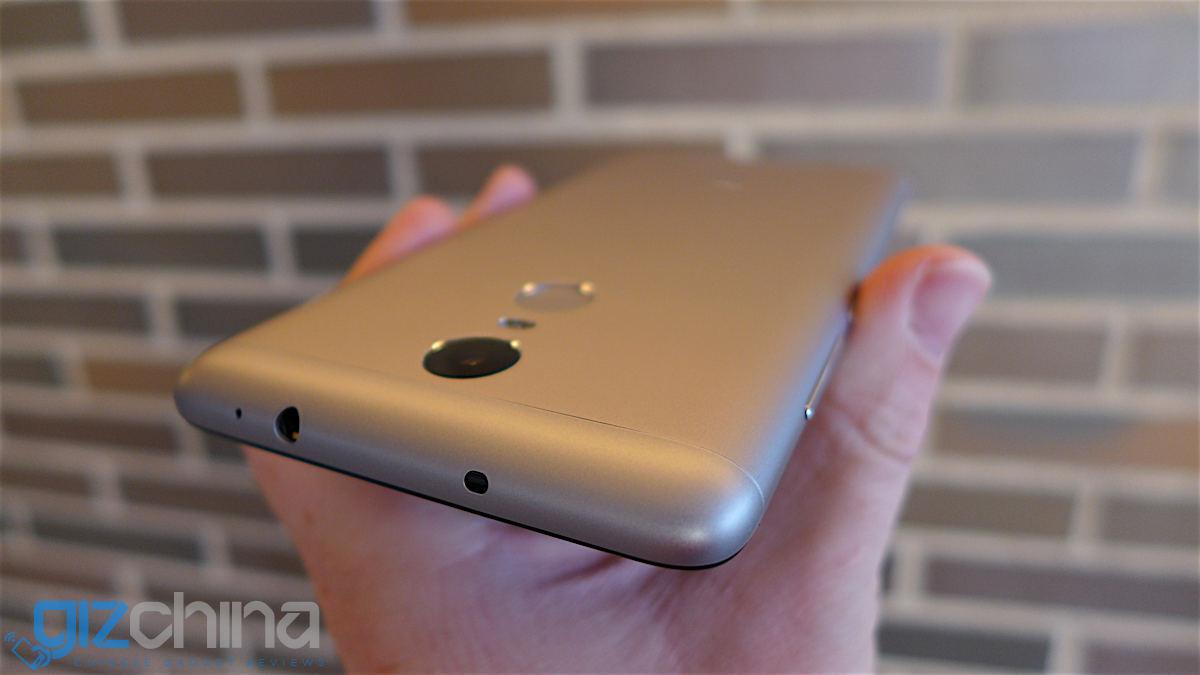 The metal body curves around the phone to create enough room for the internal 4000mAh battery, and while it is alloy it is a simple stamped and bent construction, there is no fancy CNC machining here and you can tell once it is in your hand. That’s not to say the Xiaomi feels cheap, but it doesn’t feel as nice as the LeTV Le1s, and it isn’t a patch on the Meizu MX5 (although it shares a very similar design).

In the metal body is a 13 mega-pixel rear camera, dual tone LED flash, and that new single touch fingerprint scanner. The final touches are the Mi logo and rectangle rear speaker.

If you are in the market for a well spec phone with Mediatek Helio X10 processor, then you have probably taken a look at the Redmi Note 3 and Redmi Note 2, and more than likely you have seen some similarities between the two phones. But even though things look the same on paper they aren’t in real life. As you may have seen in my comparison between the two latest Redmi Note phones, the Redmi Note 3 has a whiter, brighter display. The PDAF 13 mega-pixel rear camera takes better photos, and the physical home buttons are back lit in white not red.

Both the Xiaomi Redmi Note 3 and 2 have a Mediatek Helio X10 chipset, and options for either 2GB RAM or 3GB RAM. The 2GB RAM model is what I am using and it comes with only 16GB internal memory, this is important to remember as there is no SD card slot on this phone like there is on the plastic bodied Redmi Note 2.

The main hardware changes are the battery, LED flash and fingerprint scanner. The battery is a non removable item this time round, and at 4000mAh is one of the largest batteries to find its way in to a Xiaomi device. Its great to see such a monster battery in the phone, and in my usage I was easily getting through 2 days of moderate use.

And that leaves the fingerprint scanner. I am really won over with having a fingerprint scanner on my phones. It’s not necessary the additional security that attracts me but the convenience and speed of having one. The rear position of the fingerprint scanner on the Redmi Note 3 means that the overall length hasn’t needed to be stretched and also means it is in the perfect position for your index finger to tap. And a tap is all you need. Even if your phone is asleep and the screen blank, a quick tap of the scanner is enough time for the phone to register the touch, read the print and act accordingly. For those of you who like to use the external speaker of a phone to listen to music, then this is one area that I wasn’t too impressed with. A direct comparison with the LeTV Le1s proved the LeTV offers much clearer audio and slightly better bass. Through earphones the Xiaomi performs better, but again LeTV have the slight edge here.

While on paper the two phones should perform equally in the camera department, the truth is the Redmi Note 3 is head and shoulders above the cheaper plastic phone. PDAF is actually notably faster on the Redmi 3, and the images are much nicer with more natural colour reproduction.

It’s a quality camera and one that I would be more than happy to use on a daily basis.

The Xiaomi Redmi Note 3 is a great phone, there is simply no doubt about it. The Helio X10 chipset is powerful, the updated camera is a great performer, and the huge 4000mAh battery and super fast fingerprint scanner are amazing additions.

Its a great phone for anyone wanting a well made phone with constant development and great all round performance. If you want something that handles audio better, has a nicer display, and feels better made then the LeTV Le1s is worth a look too, but remember you will get a much worse camera.

Shop for the Xiaomi Redmi Note 3 on Shop.GizChina.com.

Next Could the Lenovo K4 Note be a knocked-down Vibe X3?