Coolpad is among the biggest phone makers in China, but for some reason doesn’t quite make it to the headlines too much. Coolpad recently re-entered the Indian smartphone market with the very ‘budget’ Note 3 with which I spent a good few weeks.

The existence of the word ‘Note’ in the name of the device suggests that it possesses at least 5.5-inches of screen real estate… which is exactly the case.

The ‘bezel-less’ look that got popular finds its way on to the Note 3. This means that there are thick chunks of black bezel on either side of the screen, reminding you of 2012 phones (minus the bezel colour, of course).

From a distance, the Note 3 looks very much like an Letv X600. Once you get the phone in your hands, however, the quality of the X600 isn’t quite there.

Nonetheless, it’s only the ‘premium’ that’s missing; ‘sturdy’ is in abundance. 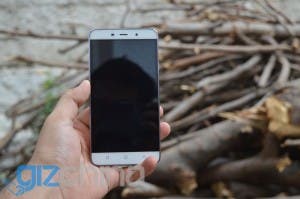 There’s also a silver coloured plastic lip around the phone that to me looks a little… hideous. That said, it can be a highly subjective thing. Besides, the lip should add extra protection to the frame of the phone (which is something that’s missing on the X600).

Under the screen you find three non-backlit capacitive keys with icons borrowed from the Android OS. I think these are the best looking icons capacitive buttons have had yet, but they look even better with some neon backlight behind them (which sadly doesn’t happen on the Note 3).

Flip the phone over and you see a rather generic-looking rear… but with a fingerprint sensor (this one’s crazy, keep reading to know why) right under the camera protrusion. Speaking of the camera protrusion, it has a (single LED) flash on one side and the secondary mic on the other.

Coolpad place a subtle logo (in rubberised ink) towards the bottom of the rear, just above the speaker grill. Taking the rear off will expose the hybrid SIM slots and the area beneath which the non-removable battery sits.

Make no mistake — the Coolpad Note 3 is almost entirely plastic but the phone has a reassuring build. One that appears to have enough in it to take a beating. 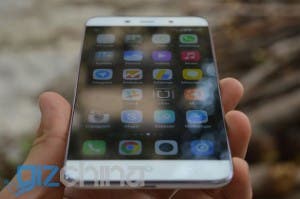 That is of course, if you plan to use the Note 3 as a smartphone and not a mobile gaming station. Before delving into the performance details of this phone, let me get the other bits out of the way.

The first thing that you’ll notice about the Note 3, like you do for any other phone, is the screen… which is a downer for me. At the first look it might seem something pretty good, but once you realise how colours wash out at even the slightest angle, it wont take too long before your opinion changes.

Coolpad seem to have tuned the screen to be a little dramatic/saturated which is another thing that might not be to everyone’s taste. Very easily, this display is the phone’s Achilles heel.

Other hardware on the phone seems to be mighty fine, though. The sound, reception, camera, battery — the Note 3 kills it.

Speaking of battery, it has a 3000mAh battery which doesn’t sound like much, but the battery life it returns is pretty awesome. I’m all for a good battery life on the phone, and the Note 3 (along with the OnePlus One, and 1-2 other phones) is among the few to have been up to par.

Since SOT (screen on time) is a fairly dependable measure of battery performance, here’s how the Note 3 does with it: 5-6 hours of screen on time, which will be one to one and a half days of usage depending on your style.

Moving on, sound both from the internal speaker as well as the 3.5mm jack is satisfactory. Coolpad bundle a pair of earphones which is a nice plus, but you want to get slightly better ones (perhaps something along the lines of the new Xiaomi ones) to get the best out of the Note 3. A small, closed room is where the in-built speaker of the Note 3 impresses the most — don’t ask me what that room is called.

Like I said, I’ve been mighty pleased with how the Note 3 performs. The OnePlus X isn’t the most comparable phone (with regards to the target market), but just for the record, the Note 3 does better.

The ROM — despite having bloatware — is very stable and clean. Like every other company that’s made phones in China, this one too ships the Note 3 without an app drawer.

Take a look at some benchmark scores.

It’s an alright camera. Nothing out of the world, but then again, we’re talking about a sub-$150 phone.

The sensor itself is a 13 mega-pixel one without any fancy stuff (PDAF/laser focus/etc). It doesn’t take mind boggling photos, but it’s pretty much at par with other phones in the range. That said, the camera doesn’t quite live up to the expectations raised by the rest of the phone.

Take a look at a few samples.

This is understandable on Coolpad’s part, because they’re attacking the market with price and need other means to make a cut. The consumer though, can only use the phone around these apps.

The phone also comes with an app that will let you lock apps which can be opened upon scanning of the correct fingerprint. This I think is a very nice addition if you have prying friends.

Something worth noting is that I was unable to use any microSD card with the hybrid SIM slot. I’m not sure if its an issue only with my review unit or across other Note 3 units as well, but it is super annoying.

The Coolpad Note 3 is a top phone for not too much. It’s a shame it is available only in India, since I’m sure buyers in many other countries would be happy to get the device… perhaps even with a slightly higher price.

The only downside to the phone is the screen, and the bloatware if that bothers you. Oh, and Coolpad’s following Xiaomi’s flash sale methods, so you can only buy the phone on specific days at a specific time via Amazon.in.

Overall, the Note 3 is a killer note for what it costs… and I daresay, it trumps the K3 Note as well.