Oppo’s highly customised ColorOS ROM is getting a major update to ColorOS 3.0 with beta testing already in process.

Oppo uses Android on its smartphones but their version of the system is a highly modified ROM called ColorOS. The system comes as standard on all Oppo phones and while it might not be based on the latest build of Android it is feature packed.

Over in China Oppo Forum members who own the Oppo R7 Plus have been asked to join the beta testing program for ColorOS 3.0. The new system promises updates to the UI and icons, a new status bar, plus updates in security and overall optimisations. 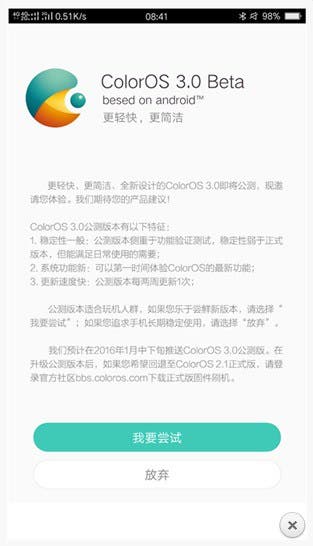 As this beta ROM is aimed at Chinese users it will probably only feature English and Chinese languages and likely won’t have Google Play Services, so international customers either wait for an global release or be confident to solve these issues themselves.

What features would you like to see in ColorOS 3.0?

Next Rumour: Huawei working on dual boot tablet with stylus