6 days from now we will know the official specs of the Xiaomi Mi5, but tipsters are adamant that we shouldn’t have to wait that long with the release of the full specs.

Apparently someone has managed to get hold of the Xiaomi Mi5 packaging label which tells us the majority of the flagship phones specifications. The image shows a crumpled label (that may have been thrown away for being incorrect) which details that the Xiaomi Mi5 will have a 3000mAh battery and Snapdragon 820 processor among other details (see below). 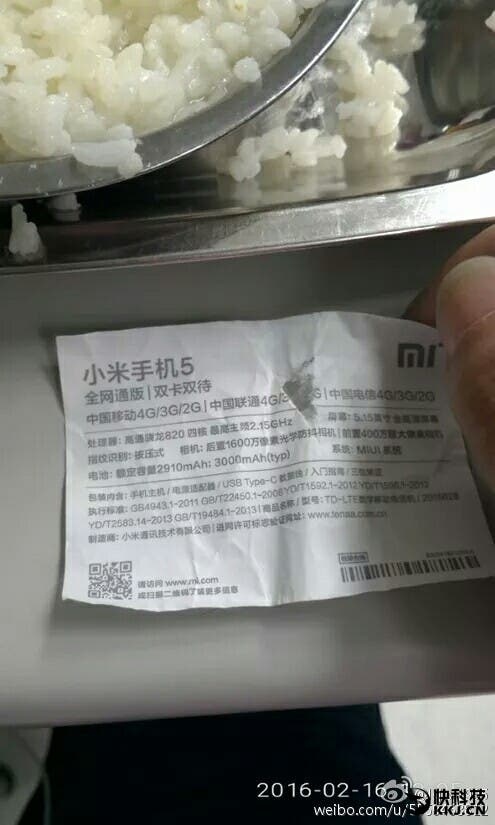 Features which really get my interest are the camera specs, plus the odd size screen. Generally 5-inch, 5.2-inch of 5.5-inch are the norm so why have Xiaomi gone to the extra effort of sourcing a slightly smaller display?

In addition to the specs of the phone, leaked images of the Xiaomi Mi5’s metal chassis have also appeared this morning, which might help explain the odd screen size.

The images show a chassis designed for a curved display. The design is similar to the Galaxy S6 Edge but the curvature of the panel isn’t quite as aggressive.

However, there is one detail of the chassis that has my spidey sense tingling. The chassis shows the power and volume rocker on the left side of the phone while Xiaomi always has these buttons on the right. This could be explained away if the images are some sort of Xray which have been reversed but I guess we will have to wait until next week to really find out.

Previous No kidding: Freedom 251 is a $3.6 phone with 4-core processor, Android Lollipop

Next Have Vivo just teased the Vivo Xplay 5S?