Latest Meizu flagship with the Mediatek Helio X25 chipset can be certainly labeled as a disappointment on many fronts and the sales are probably not so stellar either. But there is maybe a light at the end of the tunnel for the brand fans, because seems like the new version of the Meizu Pro 6 is in the making.

With just one screeshot from Weibo the discontent among the fans can be overturned, because it shows the powerful Samsung Exynos 8890 chipset inside the Meizu Pro 6. Such move would only be logical, just as the previous generation Pro 5 ran with the Samsung 7420 processor used also for example in Samsung 6/Edge. So with the same thinking the Meizu Pro 6 would get on par with the latest Samsung S7/Edge and all the Helio X25 experiment could be forgotten. 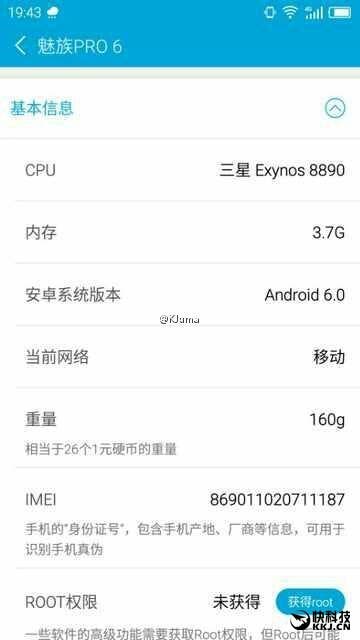 Of course until it’s all confirmed we are still in the land of wishful thinking, but personally i believe such information to be very likely true, because it just fits. The Helio X25 equipped version would take the role of the “MX6” and the “real” Pro 6 would run with the Samsung chipset. Some price adjustment would probably be needed too, because it’s too optimistic to expect the same 2499 yuan (384$) price being slapped on the new Meizu Pro 6 version. We will definitely keep an eye on that so stay tuned.