Back in September of last year, PPTV launched a couple of phones featuring glasses less 3D technology, recently those phones have had a serious price drop causing a lot of speculation.

It was hardly surprising that PPTV launched a couple of phones last year, after all rivals LeTV had done the same and managed to do really well so what could PPTV do differently?

Well the PPTV brands phones got 3D screens using similar technology to the 3D display on the Nintendo 3DS. The top of the range model also got a 2K resolution, 3GB RAM and 13 mega-pixel rear camera too.

Pricing wasn’t the greatest however with the PP King 7 (with no 3D) costing 2199 Yuan while the King 7S (with 3D) was up at 2699 Yuan. But if those prices did put you off and you still want a 3D phone (and are in China) then this is the time to buy. 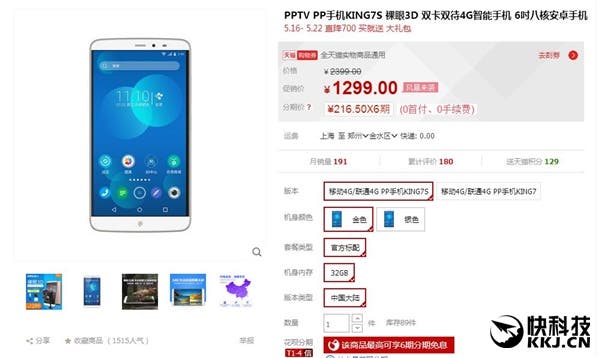 For a limited time the PPTV phones will be on sale for 999 Yuan and 1299 Yuan (which is really competitive even today) and the phones will also come with a 12000mAh battery and headphones.

The price drop has had some insiders to speculate that PPTV might withdraw from the hardware space due to poor sales, while others have suggested PPTV might have new devices to launch with lower pricing than before.

Whatever the reason there are some deals to be had for the next few weeks to keep an eye out to see if resellers take advantage of the reductions.

Next Xiaomi Max available to pre-order for $299.99