A new GFXBench benchmark reveals more of the specs of the upcoming OnePlus 3.

The OnePlus 3 has been hitting the declines quite often these weeks, and with the launch just 7 days away expect more leaks and teaser to hit the web too.

Current rumours include the the phone is a rebadged Oppo R9 with updated hardware, there are reports that there will be up to 6 variants of the phone, and Pete Lau has even reported that the new phone feels great to hold (but of course he is going to say that).

The most recent leak comes in the form of a GFXbench benchmark that seemingly reveals more of the details of the top of the range variant of the OP3.

According to the benchmark the most expensive version of the new phone will come with a Snapdragon 820 chipset, 6GB RAM, 1080p FHD 5.5-inch display, 64GB memory, 8 mega-pixel front camera and 16 mega-pixel rear camera.

The benchmarks also indicate the phone will feature NFC and a single SIM card slot! This last detail is a little surprising since the OP2 has dual SIM support. 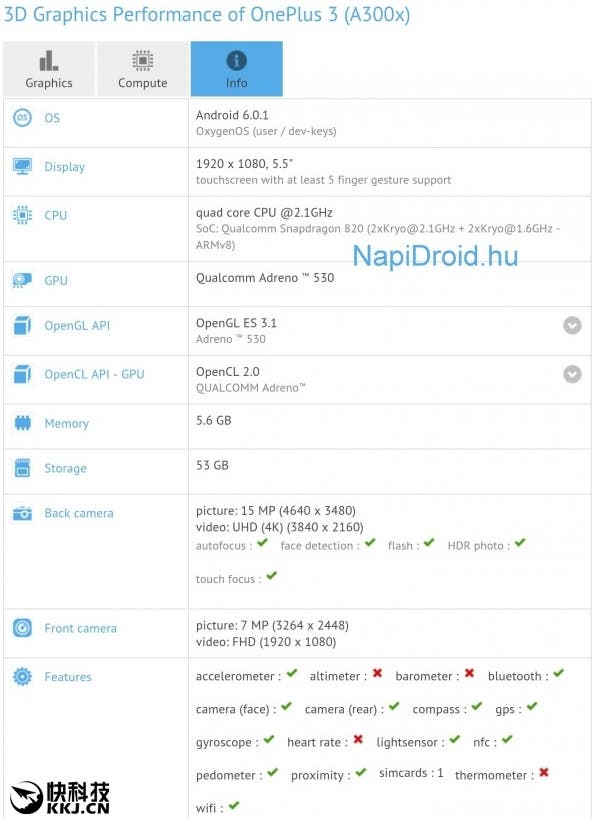 Other features of the OP3 include a battery of at least 3000mAh and VOOC fast charging from parent company Oppo. Lower end OP3 variants are expected to get less storage and 4GB RAM.

Watch out for more OnePlus 3 news and the phone launch on the 15th June!

Previous ZUK Z2 goes on sale today, expect it to sell out fast