A couple of months ago, a leaked roadmap featuring Huawei’s planned updates leaked out online. It gave us a rough estimate of when we were going to get updates, and it seems like they’ve been following it so far. Now, a new roadmap’s been leaked, and it features more of their devices than the last one.

The devices that weren’t on the last roadmap include the Huawei Nova, G9 Plus, Honor Note 8, Honor 6X and Mediapad M3. This bunch of devices weren’t included in the last roadmap, which was pretty worrying since these devices are all still relatively new. Thankfully, this new leaked roadmap has confirmed that most of their current devices will be getting updates soon. 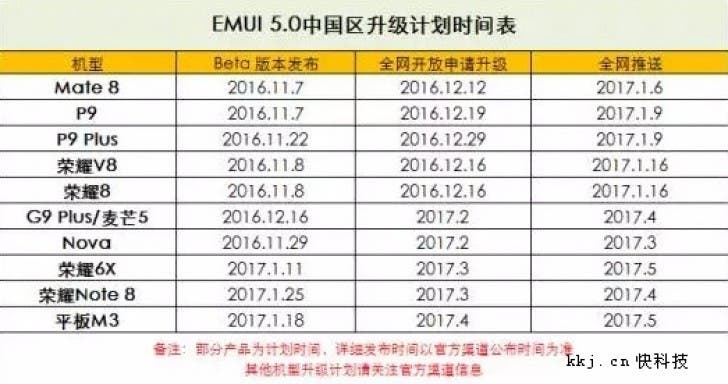 The first of these devices to get updated will be the Huawei Nova, which will receive its update in March. After that we’ve got the Huawei G9 Plus and Honor Note 8 in April, and finally the Honor 6X and MediaPad M3 in May. These will be the final stable versions of the software. The first and second columns on the other hand signify the start and end of beta testing for the devices.

Of course, we recommend you take any leaks like this with a grain of salt. There’s always a large possibility that this is fake or incorrect. If it does turn out to be true however, we could be seeing Huawei turn a new leaf with their updates becoming more frequent than before.

Previous Bluboo Dual vs Doogee Shoot 1 - whose camera is better ?