If you woke up this morning and found a dubious looking “Status” tab in WhatsApp messenger then you probably raised an eyebrow just like I did. Software updates spread like wildfire these days and this one will fire up a whole new “story” for the popular messenger app.

Read on to learn a thing or two about the new WhatsApp ‘Status’ feature.

Jan Koum started developing WhatsApp in 2009 and back then, he wanted to create a simple status app. It bloomed into a messenger and success for WhatsApp came virtually overnight. Five years since its inception, Facebook bought WhatsApp for a staggering $19 billion.

WhatsApp has seen many iterations since the Facebook takeover, and the latest update is one of the biggest makeovers so far. WhatsApp has rolled out a new status feature that works exactly like stories on Snapchat and Instagram.

If your phone has received the OTA upgrade then there should be a camera icon on the extreme left where the “calls” tab used to sit. Navigate to the new tab and you can take photos, record videos or share visual media.

How to Use WhatsApp Status

If you use Snapchat or Instagram stories then the next bit should be intuitive. However, if you don’t, allow me to show you the ropes. Your ‘status’, once updated, can be shared with everyone on your WhatsApp contacts list (although there are provisions to customise who gets to see the status). 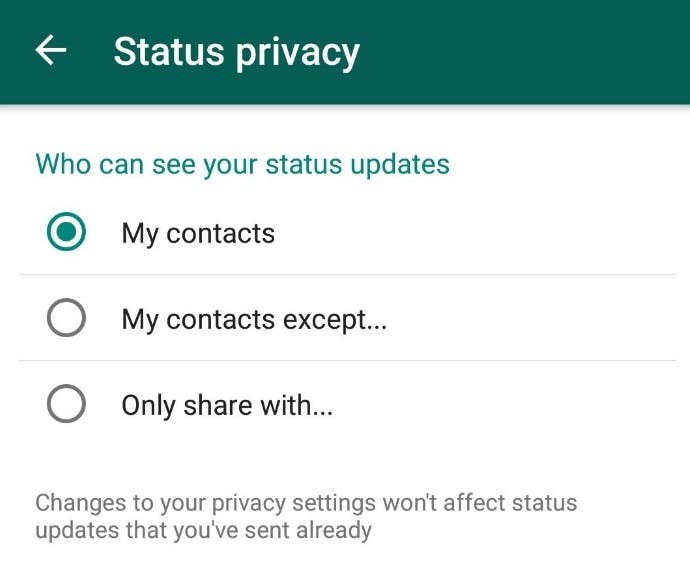 Join GizChina on Telegram
Read Also:  How to bypass Android lock screen in a few seconds

Alternatively, you can manually select the people who are allowed to see your status.

So what is it, really?

So what does the new status feature do, really? I think of it as a cool new way of letting people know what you’re doing. For a long time there was a text/emoticon status next to your profile photo which no one ever really saw.

This has now been done away with and the new status tab is the only way of telling people that you’re in a meeting or announcing “Hey there! I am using Whatsapp”.

A few years ago, rumours abounded that Snapchat had refused to merge with Facebook, possibly irking Mark Zuckerberg. Now Facebook has gone ahead and created its own “Stories” platform on not one but two popular apps (with a third one — Facebook itself — reportedly in the pipeline).

WhatsApp has evolved into a kind of hybrid between a messenger and a social media platform with all these updates.

The future of WhatsApp

Whatever face WhatsApp takes, it has remained true to its founder’s vision. Koum visualised a status-sharing app when he began developing WhatsApp and that’s exactly what it has now become, even if the process has taken dozens of iterations.

For all we know, this mighty update will be trivial in the face of future upgrades. I remember Mark Zuckerberg hinting at monetising the WhatsApp messenger.

Perhaps this is the gateway that advertising companies have been waiting for? The future will tell.