We’ve all been expecting the official announcement of the Xiaomi Mi 6 flagship along with its larger sibling (Mi 6 Plus) and a lot of speculation has been made regarding some of its hardware like for example its dual camera, its main processor etc. 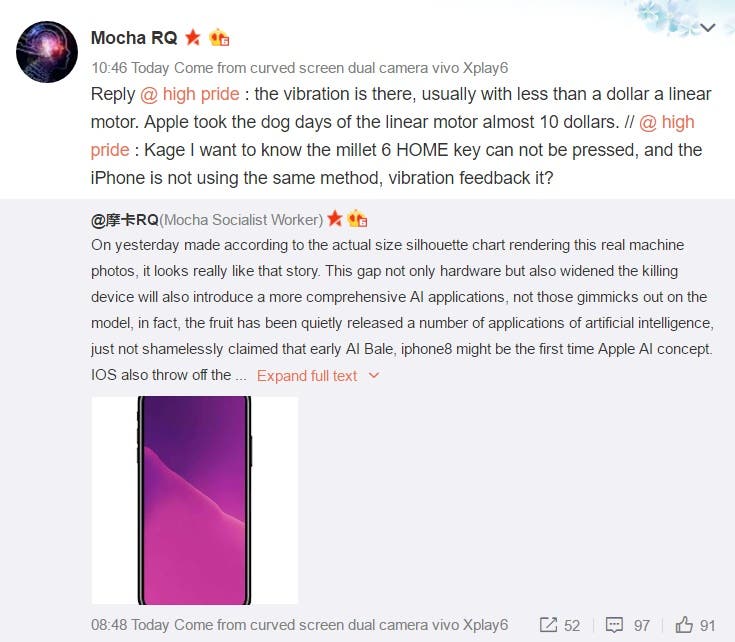 A new post today on Weibo however, deals with a different part of its hardware that could create massive problems for the device. We’re talking about the home button of the device, one that also doubles as a fingerprint scanner.

According to recent leaks from analysts like Sun Changxu for example, the upcoming Mi 6 model is expected to use an ultrasonic fingerprint scanner similar to that of its predecessor, Xiaomi Mi5s. This small part is embedded under the front glass – just like the one iPhone 7 has and allows designers to create more impressive smartphones with better usability features.

However given its position, this fingerprint scanner also works as a home button, but with one small detail: it doesn’t press down. In order for it to perform its task, a a linear motor is needed to provide vibrational feedback, the same way iPhone 7 does.

This is where the news comes today, when another analyst called @Mocha RQ, mentioned that while the iPhone 7 uses a 10$ worth linear motor, the one on the purported Xiaomi Mi 6 costs a little under 1$, thus providing less vibrational feedback and perhaps lower reliability.

Do you think this could be an issue? (if the information is valid of course).

Next Flash sales for the Homtom HT37 are still under way