Chinese phone manufacturer Gretel believes that fans of the Nokia 3310 shouldn’t fall for nostalgia, but rather look at the specs and choose something more up to date.

When Nokia relaunched the 3310 they really did spark the interest of the tech world and many of us who owned the original 3310. While the new 3310 does see some improvements over the original indestructible phone, it’s still a far cry away from even the cheapest of Chinese Android smartphones.

Gretel for one believes that their Gretel A7 is a 3310 killer! Not only featuring hardware way above the classic Nokia phone but also benefitting from a similar durable construction (see the video below to see what they mean). 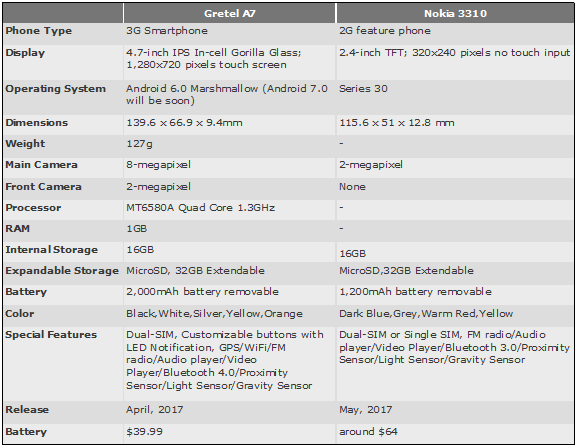 While the 3310 will go on sale for around $64 the Gretel A7 will cost an incredible $39.99! Gretel plans on launching the A7 before the end of April and will offer the phone in black, white, silver, yellow and orange.

Previous Huawei Enjoy 7 Plus set for launch on 28th April

Next Presales of Oukitel C5 start tomorrow priced at $49.99