It seems that the purported Moto Z2 Force made an short appearance on AnTuTu’s database under the model number “Motorola XT1789-05”, revealing some of its specs a couple of weeks (?) before its official 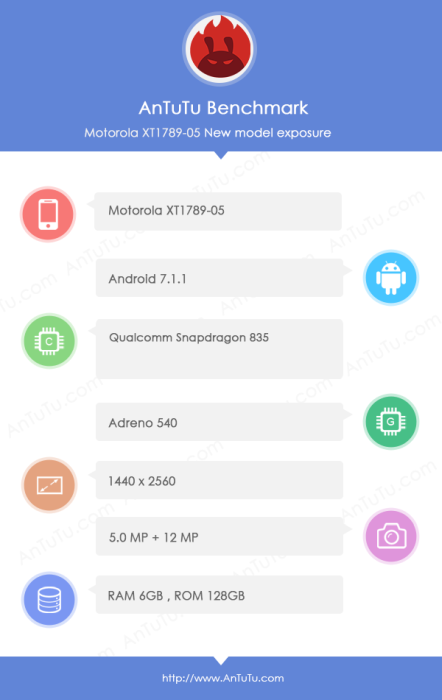 According to the data gathered by the benchmarking tool, the Moto Z2 Force is expected to be equipped with a Qualcomm Snapdragon 835 system-on-chip (SoC), along with an Adreno 540 graphics chip and an eight-core CPU comprised of two quad-core Kryo 280 processors in a big.LITTLE configuration.

The device will also pack an impressive QHD display with a resolution of 2560 x 1440 pixels, along with 6GB of RAM and 128GB of internal memory. It is also expected to boast a 12-megapixel main camera and a 5-megapixel front-facing sensor, however, it’s worth noting that previous leaks and rumors have indicated that the Moto Z2 Force could employ a dual-camera setup complete with a dual-LED (dual tone) flash.

The AnTuTu listing confirms that it runs Android 7.1.1 Nougat out of the box and as far as benchmarking performance is concerned, it scores around 168,000 points, a score similar to the one other Snapdragon 835 flagships had.

So far there’s no official announcement on when the device will be available for purchase, but nevertheless, Motorola Mobility is expected to hold a press event in New York City on July 25 called #hellomotoworld, so perhaps we will see it there!

Next Honor 8 Pro now available for pre-order in Malaysia