The LG V30 is the successor to the much acclaimed V20. The latest leak is actually a courtesy of LG. LG had collaborated with HitRecord to give early birds to get their hands on the V30. The users were supposed to share their views and opinions about the smartphone in a closed forum, which didn’t exactly remain closed as pictures from the same were leaked on the net.

Aaaaaand a bunch more… thanks for running this contest in public, LG 😉 pic.twitter.com/iCHlefdz7y

Leakster Roland Quandt tweeted the pictures yesterday on his account. The pictures revealed show the LG V30 in all its glory. This is the first time we have got to see the LG V30 after the numerous leaks that have been floating around. From what can be inferred, the fingerprint sensor lies in the back of the phone, which is made of glass just below the dual camera setup. The front is expected to sport an OLED display with the bezels around running really thin this time. The front barely seems to have any room for bezels or buttons. The V30 is expected to sport the Qualcomm Snapdragon 835 chipset coupled with a minimum of 4GB of RAM. 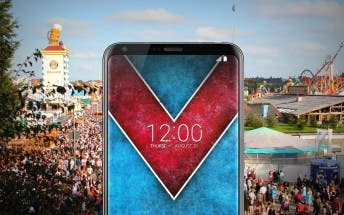 The V30 is expected to be announced on the last day of the month. It is now confirmed that the V30 will be unveiled on the 31st of August as LG has sent out invites for the same.