Late September, Huawei teased the launch of the Honor 7X on October 11. It has now popped up on the benchmarking site, Geekbench and revealing some of the key specs. 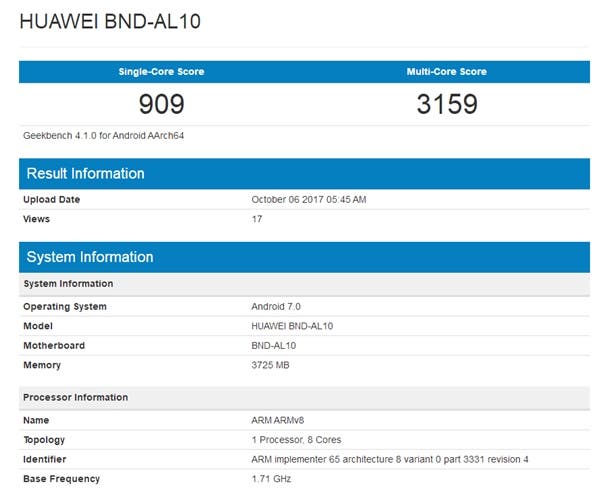 Branded as Huawei BND-AL10, the Geekbench listing puts the single core score at 909 points, while the multi core score is 3159 points. Under the hood lies 4GB of RAM and an octa core processor which according to previous rumors is the Kirin 659. The phone is running Android Nougat 7.0. A previous leak that confirmed the 3C certification claimed that the Huawei Honor 7X will feature the Kirin 670 processor.

Judging by the specs, the Honor 7X will be a mid ranger, a claim which is fortified by the benchmark scores. Another interesting rumor is that it’ll sport a dual camera setup on the rear making it the ideal competitor for the Xiaomi Mi 5X, a highly capable mid ranger. Huawei is holding an event on the 11th of October, where the Honor 7X will see the light of day. Looking at the scores and specs, it might turn out to be a decent mid-ranger. Currently, the Mi 5X is my choice of the best value for money mid ranger. Will the Honor 7X come any close to that? Watch this space for more!

Next Huawei Honor 7X gets listed on TENAA; 64/128GB variants in tow