Samsung’s mid-range premium handset, the Galaxy A7 (2017) is getting monthly some software maintenance in November. It is being reported that the handset is getting the latest November security update in India. The same patch has already rolled out to South Korea and the UAE. So, we expected this to be only a matter of time. 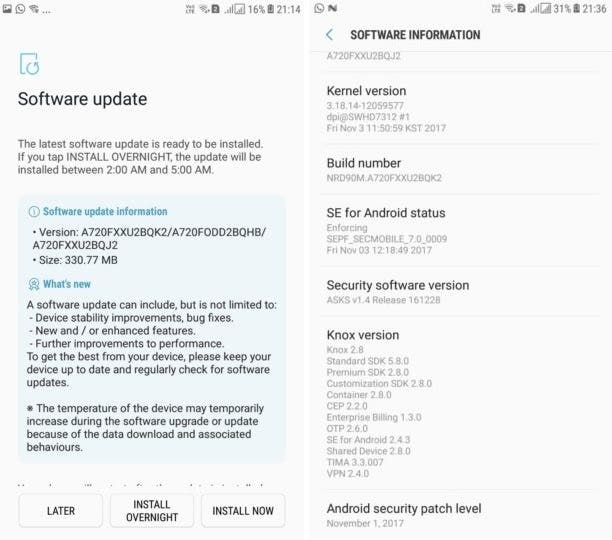 The important thing is that the update which is aimed to improve security seals the KRACK bug for good. Apart from that, there are as many as 61 Android security issues fixed. The update also squashes bugs specific to Samsung’s UI. No new features are being reported, as is usually the case with such routine updates. The firmware tips the scales at 330 MB. It should pop up on Galaxy A7 (2017) handsets as build number A720FXXU2BQK2. As is reported, the Galaxy A7 (2017) along with its smaller twin, the Galaxy A5 (2017) in UAE, were also the first to get the November security patch.

Now, since both the A series phones get updates simultaneously, it is assumed that the A5 (2017) is also set to receive the same treatment in India. This was also the case with the October security patch.

If you do have a Galaxy A7 (2017), we highly recommend that you download this update as soon as you can. The lethal KRACK vulnerability, discovered in mid-October, is related to WPA 2 encryption and it infects every electronic device with a WiFi module. That would make pretty much every modern smartphone a target. The bug left the door open for hackers to potential data theft including passwords and other stuff.

Just as a reminder, it is advisable to charge up your device to 50% before updating your handset. Also, do check your native storage for the required space. Let us know if you own a Galaxy A5 (2017) & are seeing the same patch in India.

Previous Save the Most from BESTEK in 2017 This Black Friday!