For the past week, I’ve been using Huawei’s latest flagship phone as my daily driver, but the question is will I continue using it?

Anyone who has been reading GizChina for some time will know that once I’ve fallen for a phone I just continue to use it no matter what else launches. Eventually, I do move to a new device, but that new phone needs to be something special to get me to switch.

A few weeks ago Huawei sent over the flagship Mate 10 Pro for me to review, it’s a great phone with stunning photography features, amazing battery life and a quality look and feel, but is it all enough? 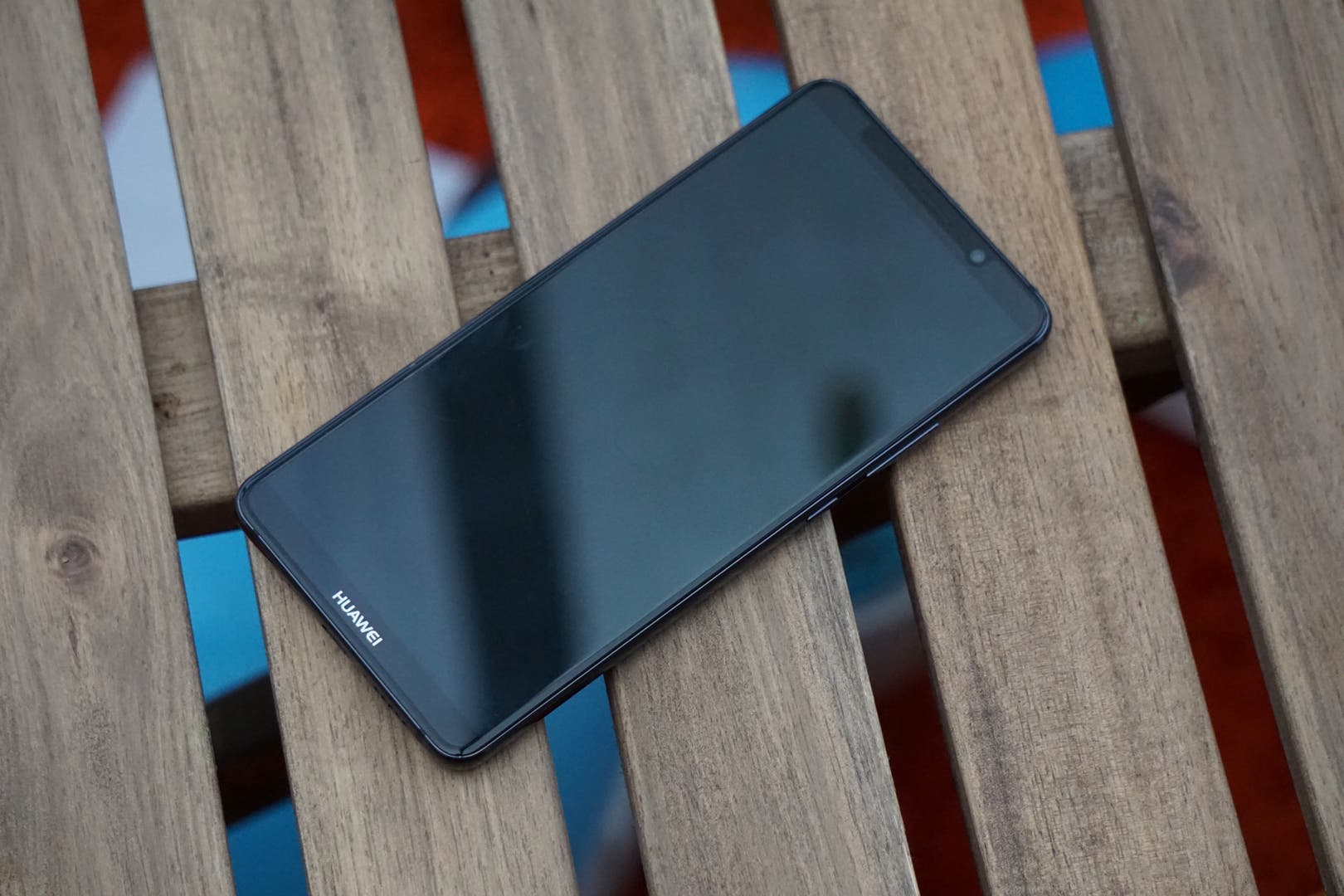 We’re at the peak of phone design and while that might sound exciting it actually isn’t really. Don’t get me wrong, the Huawei Mate 10 Pro is a good looking phone and is made of some of the best materials around and to a standard other phone makers could only dream of, but it’s hardly a unique looking phone is it. 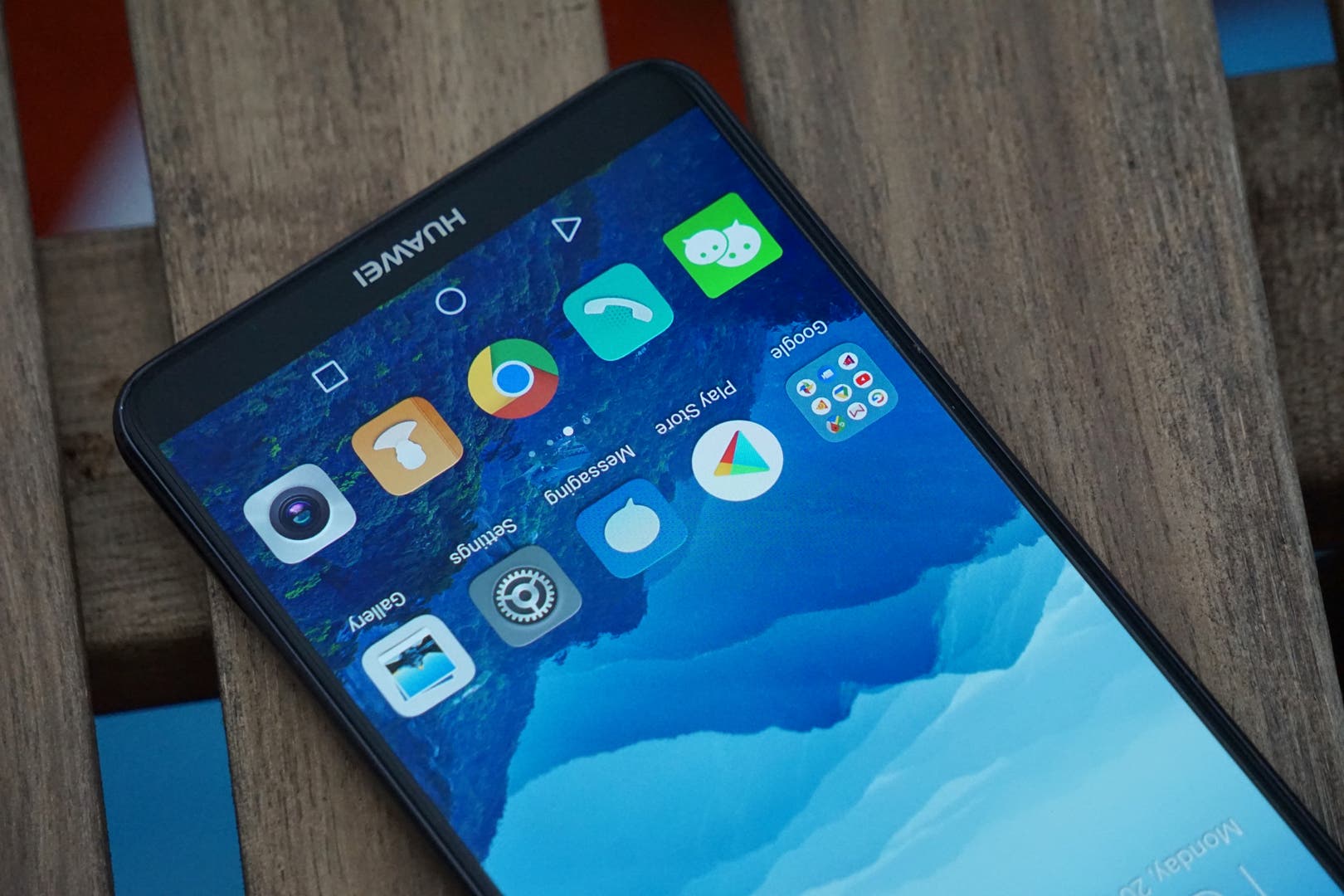 Huawei has gone for a full-screen design, meaning you have more screen to enjoy and less of a chin. While we have a larger panel the whole phone actually measures in at around the same size as a standard 5.5-inch phone. 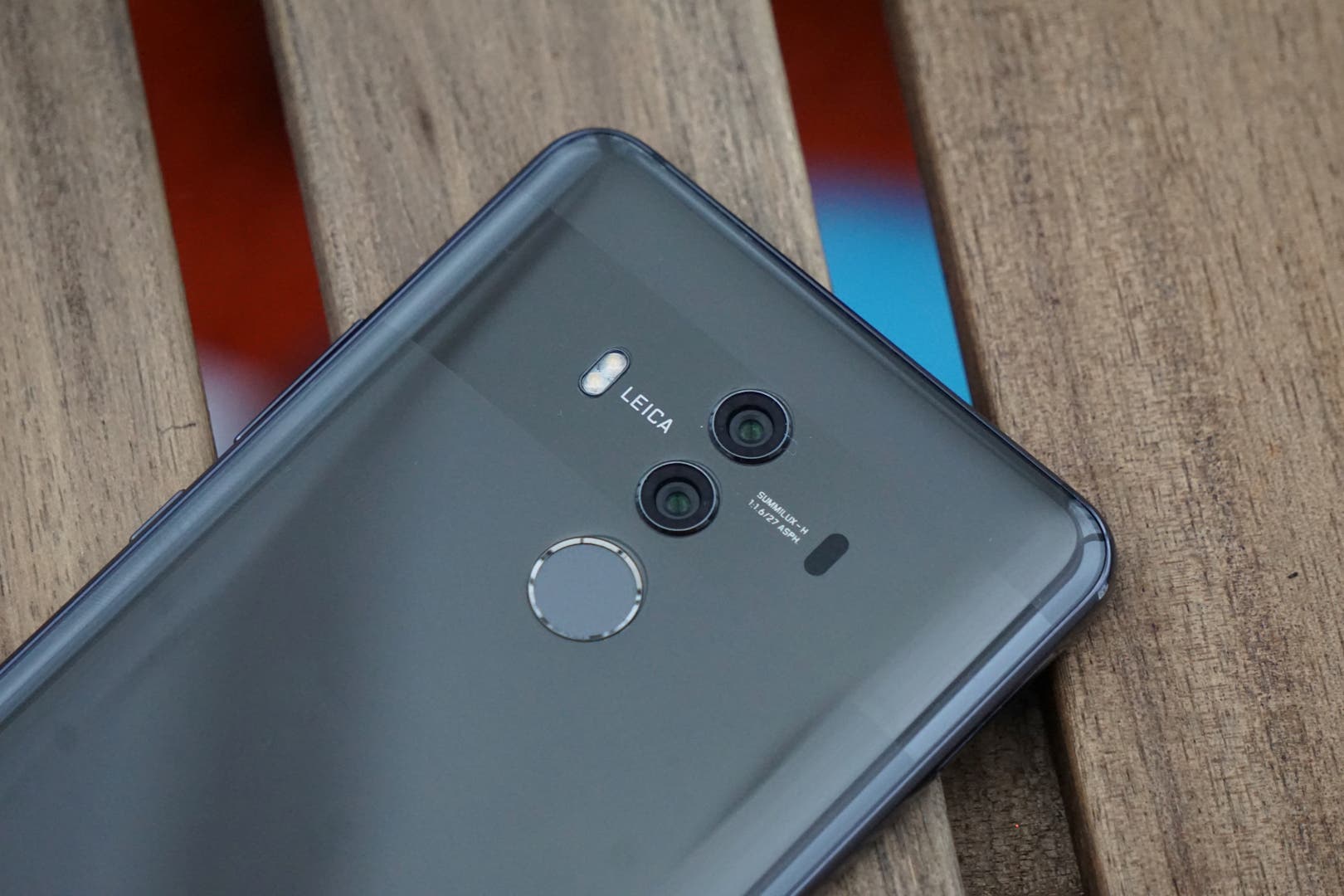 Of course, that big screen means that the fingerprint scanner has had to move to the rear of the Huawei Mate 10 Pro, but there’s still just enough room left below the screen to get a Huawei logo in so you don’t forget which brand phone you are using. 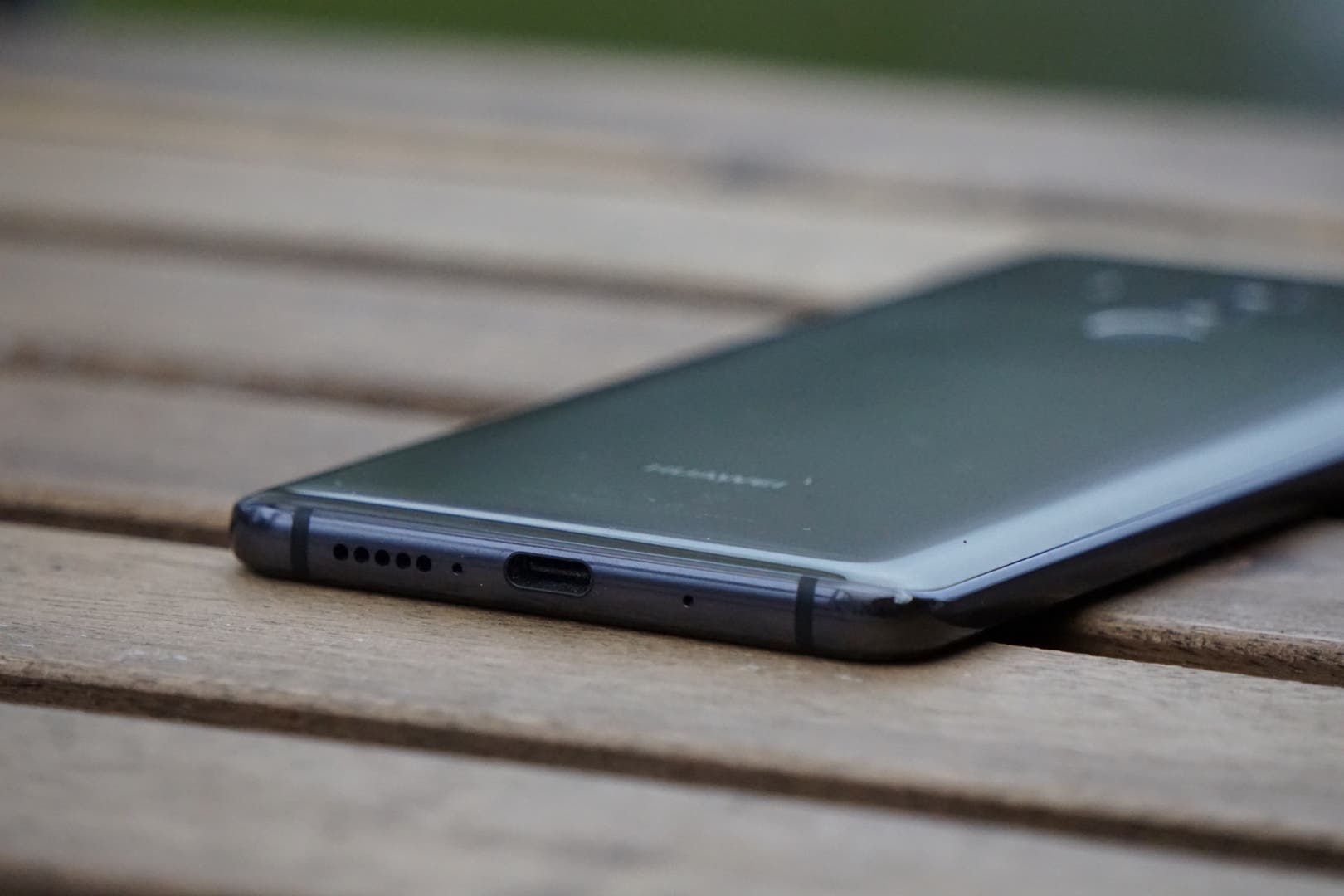 The highly polished finish continues on to the metal frame of the Huawei Mate 10 Pro making up the smooth chassis where a power button, volume control, SIM tray, IR remote and USB Type C plug are all found. You keen-eyed readers will have noticed that I missed the 3.5mm headphone jack. Well, that’s because there isn’t one on the Mate 10 Pro. What you do get though are some of Huawei’s own Type C in-ear headphones (they’re rather good too!). 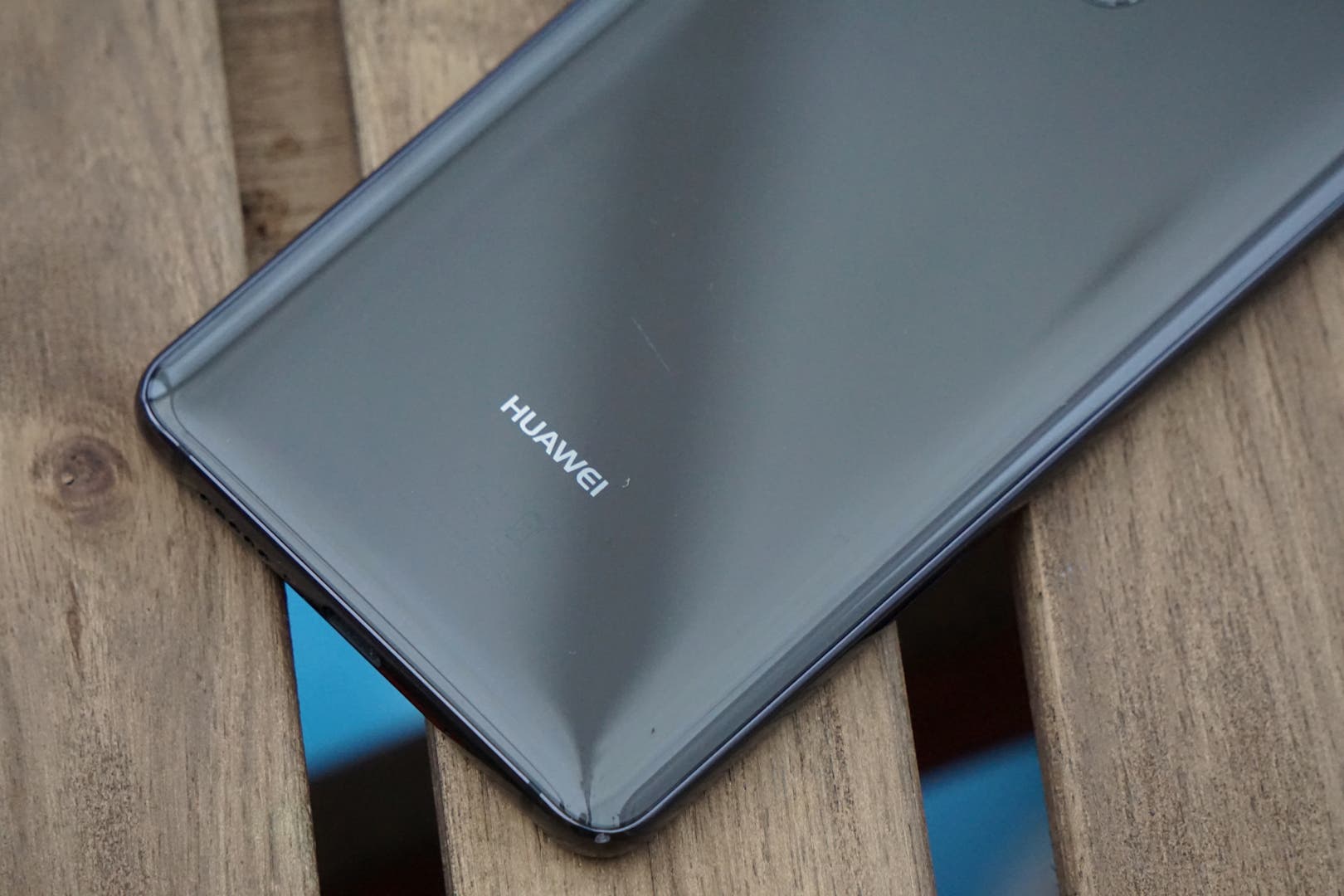 Huawei has made sure that the Mate 10 Pro looks and feels premium while ensuring that the all screen phone is comfortable to hold, and they’ve succeeded, but be warned that the glossy finish is susceptible to attracting fingerprints and greasy marks, and the smooth finish means that losing your grip or your phone sliding off a table is more likely to happen. Within the first hour of owning the Huawei Mate 10 Pro, I’d already managed to lose grip and it also managed to slide off a table, luckily both times I was able to catch the phone before it hit the ground.

Not that I would be all that concerned if the phone had hit the ground as I’m confident that the high-quality nature of the phone would ensure it survived. Using the Mate 10 Pro after using the OnePlus 5 as my personal phone for months is a revelation, the Huawei is leagues ahead in material and finish.

Huawei has built a phone that looks and feels like a flagship, and the specs follow this trend. 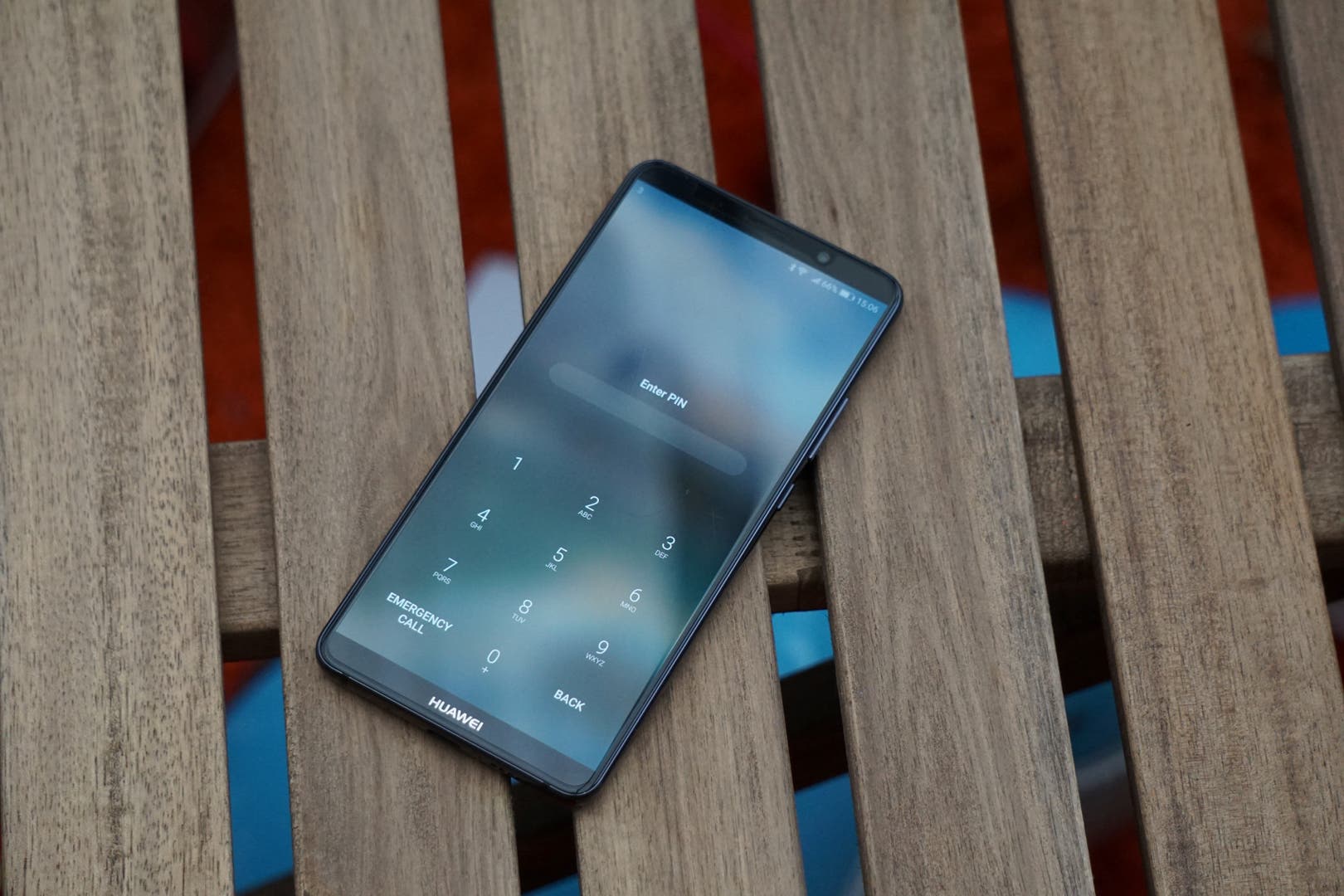 A 6-inch display in a phone measuring 154.2 x 74.5 x 7.9mm would have been a feat of magic this time last year, but with phone makers going for “full-display” (Huawei call it FullView Display) many smartphones are leveling up in screen size. Huawei has also pushed up the resolution with a 2160 x 1080 OLED display offering a pixel density of 402ppi. 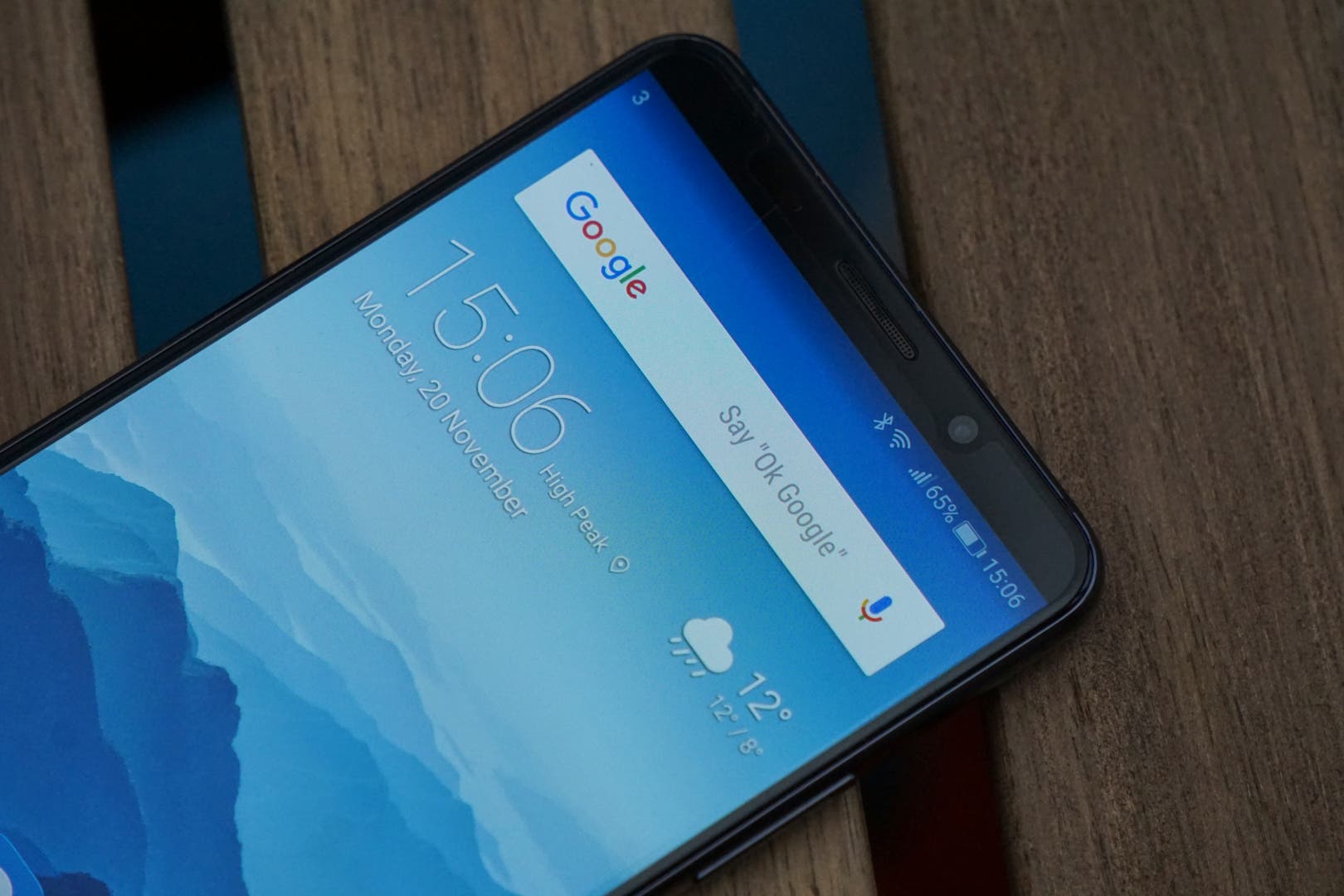 Using a phone with 18:9 display might not sound like much of an upgrade over a standard phone, but you just try to use a 2017 flagship for a few days then move back to your regular screen phone. Chances are that old phone will feel just that, old!

Another nod to this phones flagship intentions is the Huawei Kirin 970 chipset. This is a self-developed octa-core CPU made up of 4 x Cortex A73 2.36GHz + 4 x Cortex A53 1.8GHz cores. The GPU is a Mali-G72 MP12 GP. It’s all good stuff and ensures that Huawei’s Android 8.0 based EMUI runs buttery smooth in every situation. 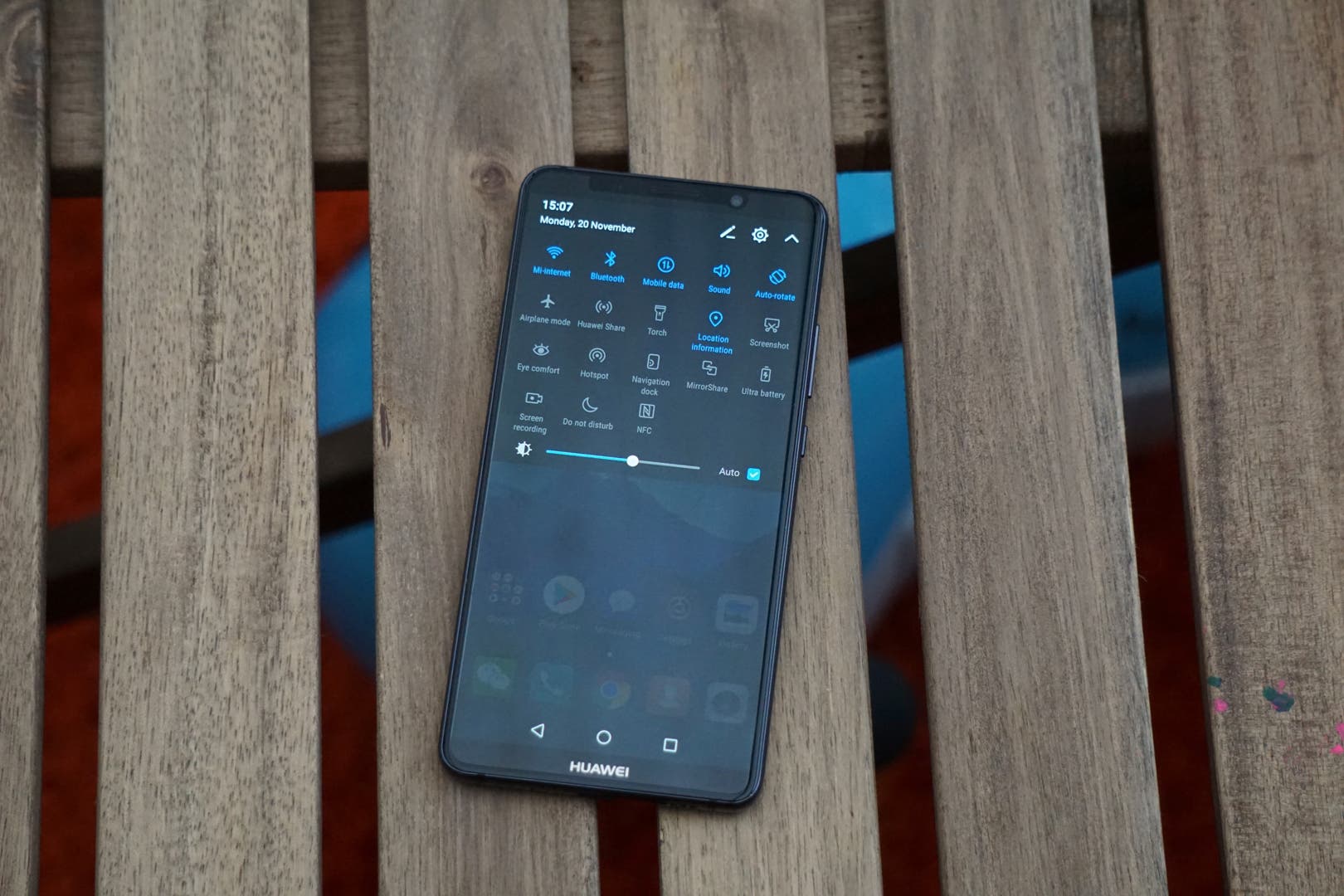 Speaking of EMUI, from my time using the phone I can say that Huawei has done a great job of creating a super stable ROM with some very nice features. The Mate 10 Pro comes with a ‘tips’ app that teaches you some of the neat gestures that EMUI supports, my favorite being a knuckle tap to capture a screenshot. EMUI also has a killer camera app, but I’ll tell you more about that below. 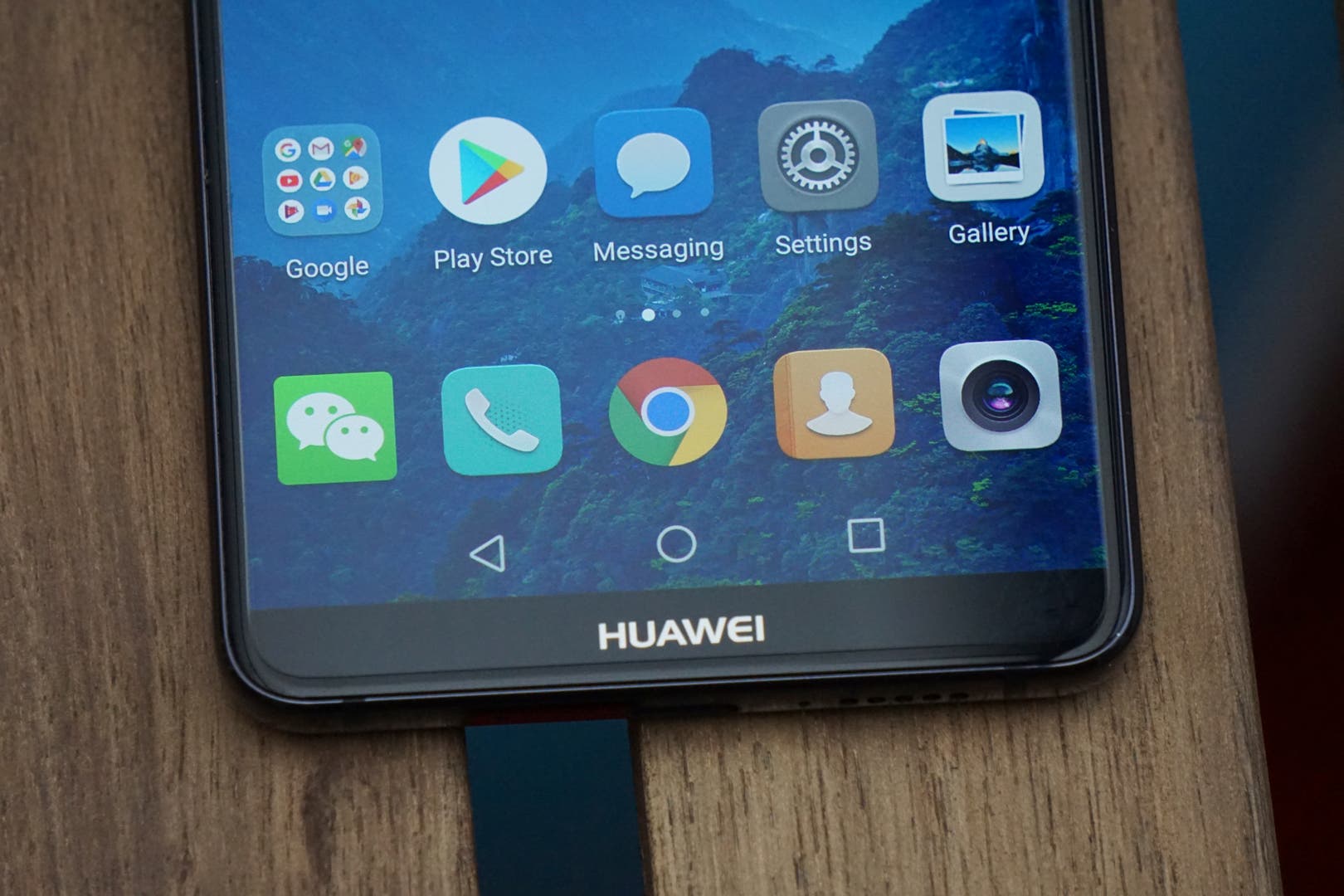 While I’ve enjoyed EMUI I do find that sometimes I get a notification dot (on an app icon or in the settings) but I’m unsure as to what I’m being notified too.

Again, only last year a sub 8mm phone with 4000mAh battery would be a pretty rare sight but Huawei has managed this with the Mate 10 Pro. The battery is enough to give the Mate 10 Pro a full 2 days of battery life on a single charge and thanks to the fast charge feature can be topped up in no time at all.

While the battery life is very impressive I’m still not sure if this is due to the fact Huawei has made a great job of optimisation or if it has something to do with the data connection. Like all modern Android phones, the Mate 10 Pro is an LTE smartphone, but it also has the worst signal strength of any phone I have ever owned! Compared to any other phone I have tested the Mate 10 Pro is the only phone that has ever left me with no signal what-so-ever in areas where I usually have full bars. On the other hand, the WIFI signal is very good and while I’m not usually able to receive WIFI in my bedroom the Mate 10 Pro manages too just grab the backend of the signal.

WIFI phone calls are supported on the Mate 10 Pro too, but I found the quality to be patchy when testing this out, but this could have been down to our office WIFI. Another feature that Huawei has built in is a WIFI assistant that is meant to be smart enough to help you switch between networks or even between WIFI and DATA on the fly. Due to the poor LTE (and 3G and 2G) performance of the Mate 10, I ended up turning this feature off. 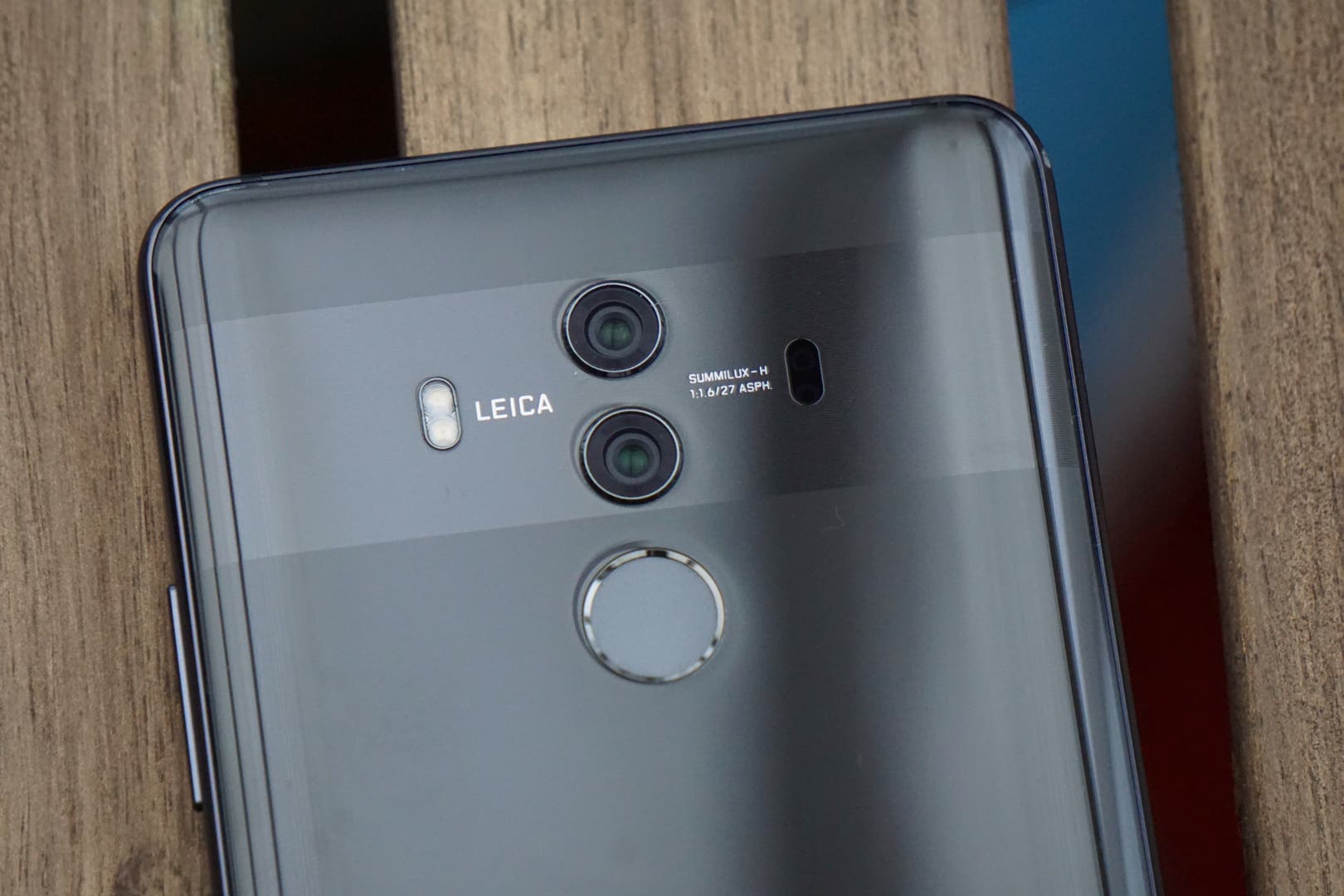 Beneath the dual Leica rear cameras is a fingerprint scanner. There’s not much to say about this other than it is fast and accurate. 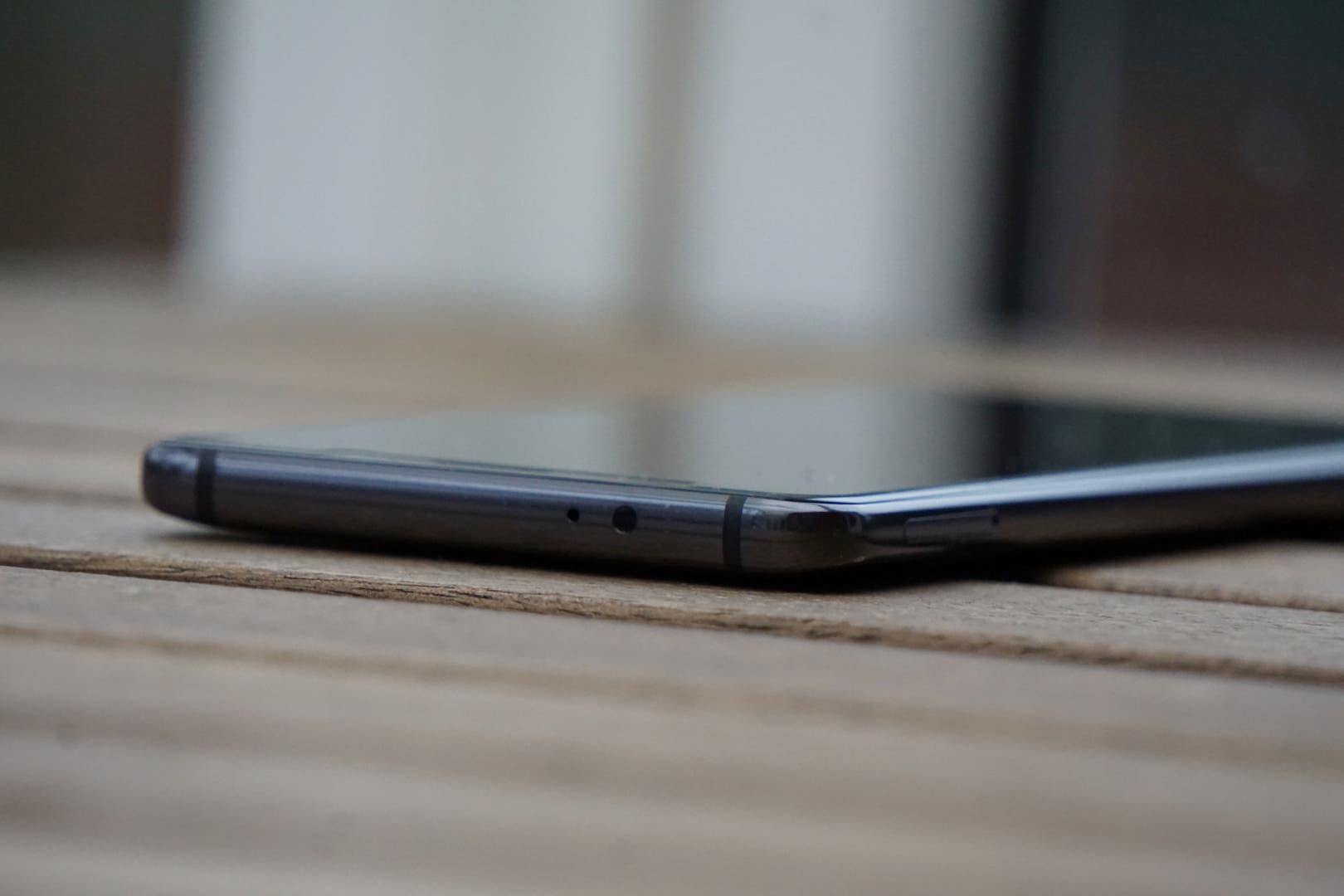 If you check out the photos of the Mate 10 Pro you’ll see that Huawei has added a built-in IR remote but there is no 3.5mm headphone jack. Instead, you have to use the USB Type C plug in the base along with the supplied USB Type C headphones. And for those of you wondering, audio is amazing!

IF you’re looking at the Huawei Mate 10 Pro as your next phone then the chances are you are drawn to this phone for the stunning camera specifications.

Huawei has teamed up with Leica once again on the Mate 10 Pro with the main cameras being a 20-megapixel monochrome sensor with secondary 12-megapixel RGB sensor both with F1.6 apertures.

Other phone brands might leave the camera specs there and call it good, but Huawei has taken the cameras to the next level with OIS, PDAF, Laser focus and Depth Auto Focus! The dual cameras will let you take native black and white photos (a feature I’ve played with very little) and also gives the phone 2 x optical zoom. 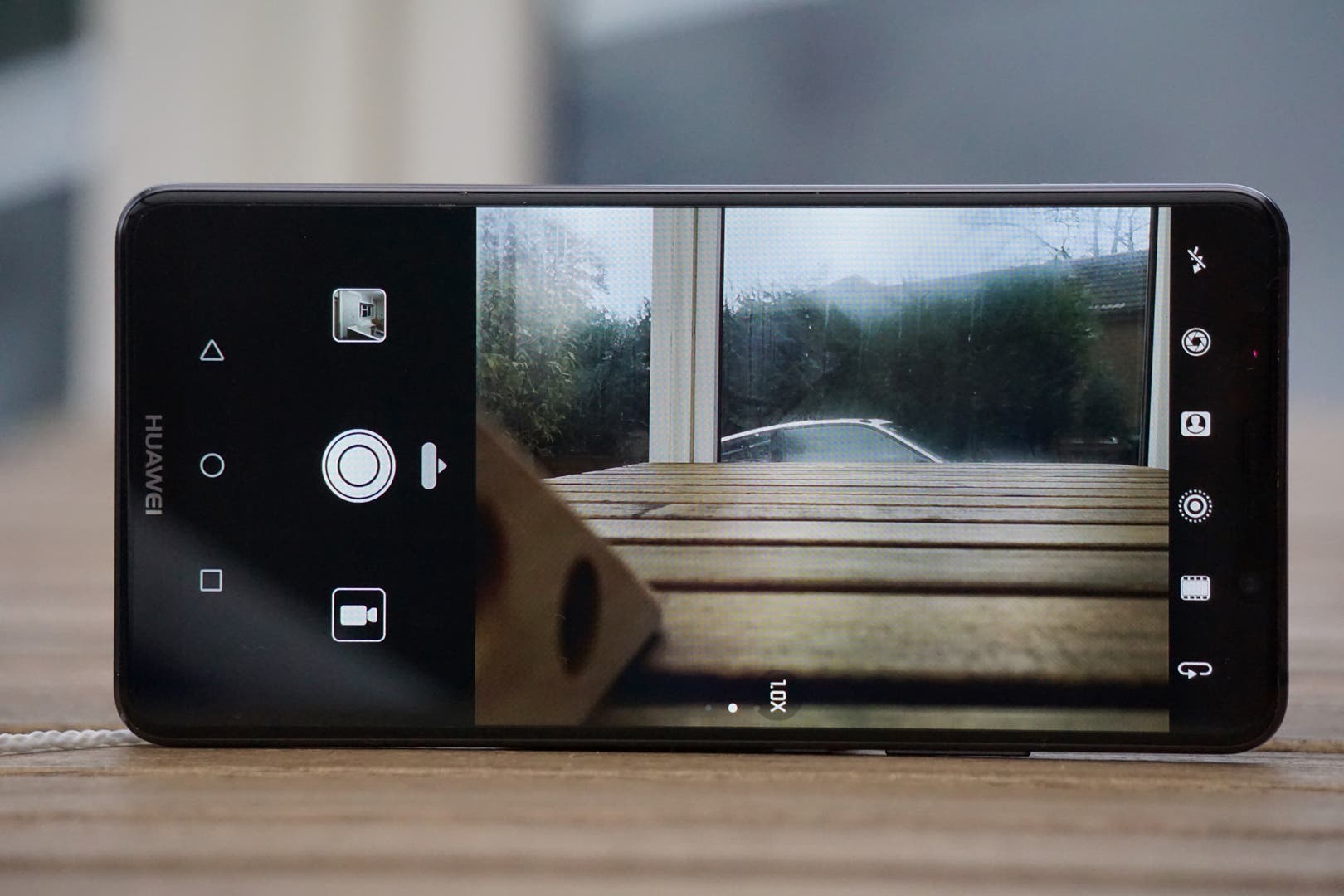 The front camera is a fixed focus F2.0 8 megapixel sensor. I prefer the fact that the rear camera is the main focus of the Huawei Mate 10 Pro, other phone makers have been adding better front sensors to their devices but I’ve found performance to be lacking. Huawei has got it the right way around with both the front and rear cameras offering great performance in all situations.

In addition to the hardware, the Mate 10 Pro also has a feature-packed camera application that uses AI to assist you to take the perfect shot.

In auto mode, the Mate 10 Pro will use its dedicated AI chip to determine what you’re about to shoot and adjust the settings to suit. Pointing the Mate 10 Pro at flowers means the camera app switches to a ‘nature’ setting and shows a small leaf icon. Point the camera at food and the setting switch automatically to food mode. Other modes include pet, person, text and night. If the app doesn’t recognize the subject no icon will show and you’ll be shooting in a regular auto mode.

You can trick the AI, for example, a stuffed toy shows up as a pet, and photos of food will also get the food setting to show up. I’ve still not been able to get the pet setting to show when taking photos of my brother though, but I continue to try.

As for performance, the Huawei Mate 10 Pro is the best camera phone I have ever used! The photos are simply stunning in all situations and the amount of detail the camera picks up is truly unbelievable. Check out some photos samples below.

What I love about the Huawei Mate 10 Pro

What I don’t like about the Huawei Mate 10 Pro 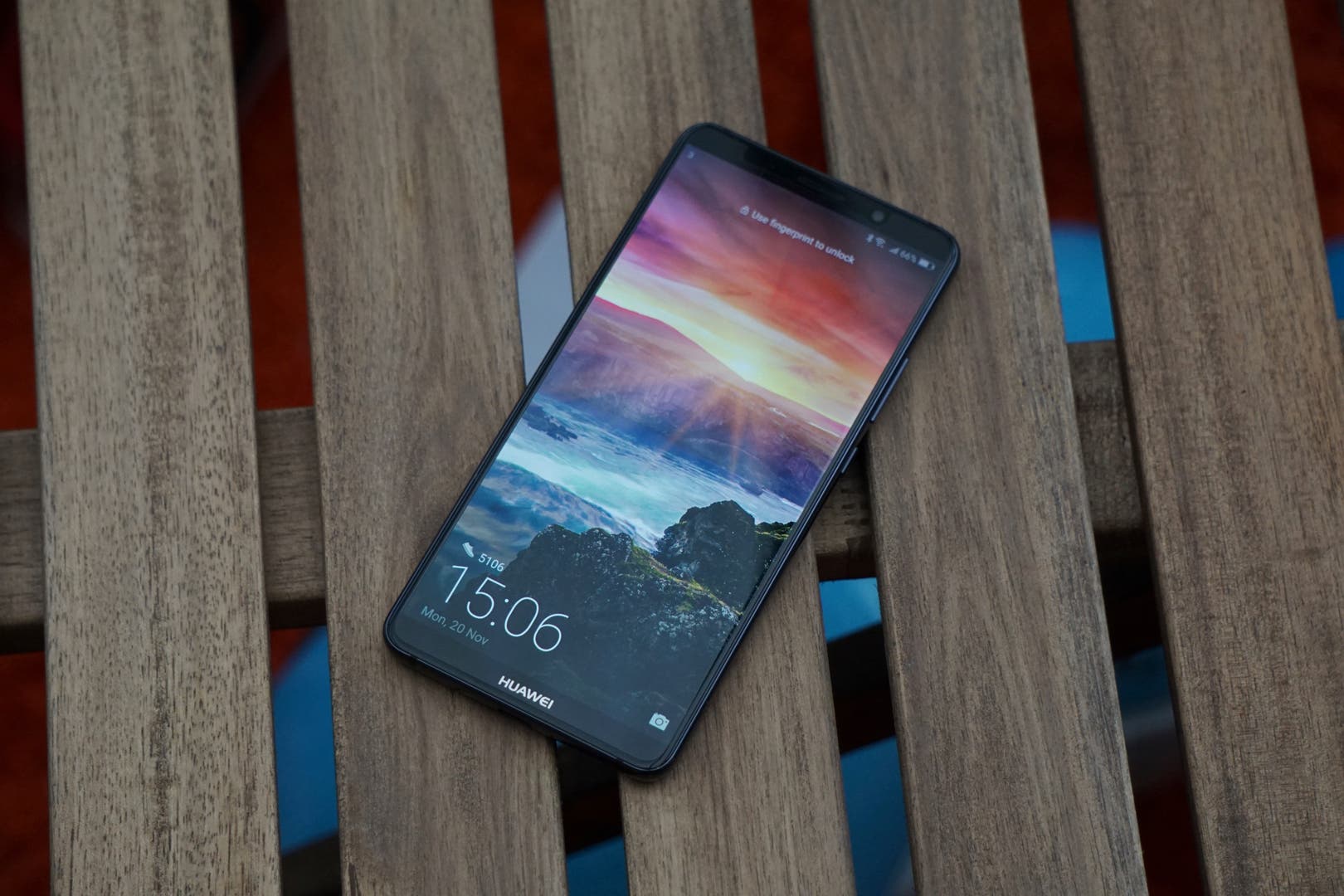 Huawei has made a top of the line phone that boasts features that everyone will love and appreciate. The cameras are incredible and for the first time, I feel that a phone is getting to DSLR beating levels of performance. Battery life is surprisingly good too, although they did take out the 3.5mm headphone jack to get a larger battery in the phone.

What is annoying though is the very poor data connectivity. While a strong WIFI signal is much appreciated, the fact that I’m more surprised to have a signal rather than not is a very bad sign. There are times I simply cannot use my phone, and while the camera, audio, and screen are stunning, a phone isn’t all that much use if you can’t call anyone or connect to the web.

I’m hoping with all my heart that an update will pop up to resolve the poor data issue, but as of the time of writing that has yet to come.