Sony isn’t the faster manufacturer in terms of following trends, or revolutionizing mobile segment. However the company has done a very good job in keeping their portfolio of smartphones updated. After Xperia XZ Premium another two Sony’s handsets, launched a year ago, are receiving the latest Google’s OS Android 8.0 Oreo, The Xperia XZ and XZs. 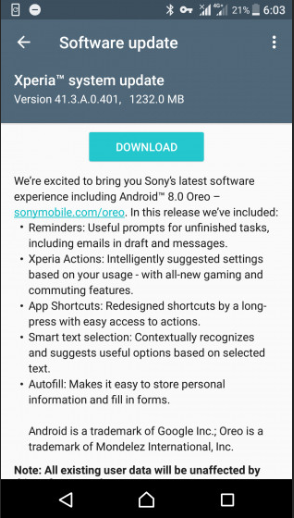 The new firmware is appearing as an OTA update 41.3.A.0.401 for some users, it weights above 1,2GB and brings the newest Oreo cookie for the two smartphones. Sony mentions that update brings more than just the referred Android add-ons from the newest version, The company has also tweaked it a bit by adding Reminders, a quick memo where users can set some unfinished work, Xperia Actions, suggested settings based on usage. In what concerns to Oreo, yeah, the newest update brings the Autofill API, Notificaitons granular channel, Picture-in-Picture mode and a revamped text selection.

The company also shows its concern with security by adding the latest Google’s November security patch to the update. So users can be assured that the phone will have exploits, like the recent WP2 KRAK, fixed in the update.

Apparently Sony is planning to keep the phones updated for one more year, this includes bringing the next Android P version. Apart the low hype towards the company in the recent years, due to the lack of appeal on its handsets, the company is ensuring that the users who chosen their phones are secure and updated.

Reports, show that the next Sony smartphone to taste the new flavor will be the Xperia X Performance with an update scheduled for late December. Keep an eye for more news about it.