American multinational technology company (Apple) recently released the usage details of the different iOS versions. The result shows that the current iOS 11 is the most accepted as it definitely comes with some new features and improved performance than the previous versions. The data confirms that 59% of iDevices are already on the two months old iOS 11. About a month ago, this value was 52%. 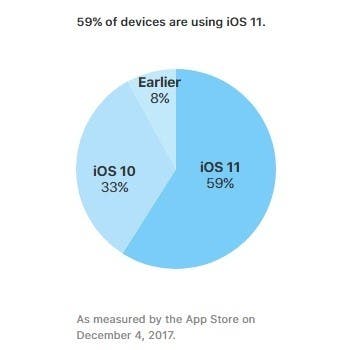 iOS 11 predecessor, iOS 10, is still quite relevant as 33% of iPhones, iPads, and iPod touch devices run on the operating system while only 8% of iDevices still fancies older versions of Apple’s mobile OS. Well, the final 8% will probably not reduce anymore because the likes of iPhone 5C, 3rd generation iPads, and 4th gen iPod touch are stuck with 2015’s iOS 9 and older versions as they no longer get updates.

Next Get a free Meiigoo Note8 in the official giveaway event