Meiigoo, a  relative newbie in the Chinese smartphone manufacturing industry released their first full display device S8 back in October. And the success of the phone encouraged them to launch yet another one, this time 5.99-inch 18:9 model Meiigoo Note8. Presales for this phone start today and we have for you an official unboxing and hands-on video.

As we just mentioned above, the Meiigoo Note8 is a 5.99-inch phone with an 18:9 display aspect ratio, slim bezels, 3D curved glass on both sides and shiny mirror-like finish. It’s also certainly worth mentioning, that the phone also fetaures Face ID recognition system, so you can unlock it with a single look. But for the traditionalists the fingeprint scannner is still there too, so don’t worry.

Under the hood, the Note8 packs a MediaTek MT6750T octa-core processor coupled
with 4GB of RAM and 64GB of internal storage (expandable via microSD). On the back
of the phone we find a 16MP dual rear camera setup for adding DSLR-like bokeh effects
to photos, meanwhile at the front we have an 8MP selfie snapper. It’s also equipped with
a 3300mAh battery to offer more than enough juice for a whole day use and runs Android
7.0 Nougat out of the box. 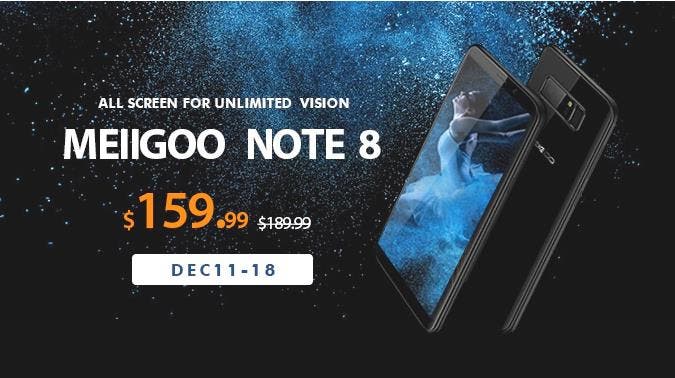 To learn more details about the Note8, you can visit Meiigoo’s official website. The presale event will last up until December 18th at GearBest and during which the Note8 will be priced at $159.99. After that, the price will go back up to the retail level.

Next Meizu's 2018 Plans: 6 new phones in the offing, Opts for Qualcomm's SD