Welcome to the era of “slim” huge battery smartphones guys! We have one of them to show you today, but I think this specific device has more to say about its performance than others. Meet Blackview P6000, a phone that boasts a huge battery inside but still has the looks to impress some of the most demanding users.

Blackview promotes this model as one of their “huge” battery smartphones but at the same time a device that boasts a noteworthy design, along with decent performance in everyday use. With a well-built design and many great features, this smartphone is perfect for those who are looking for a durable phone, with more demanding features at a… quite hefty price unfortunately. 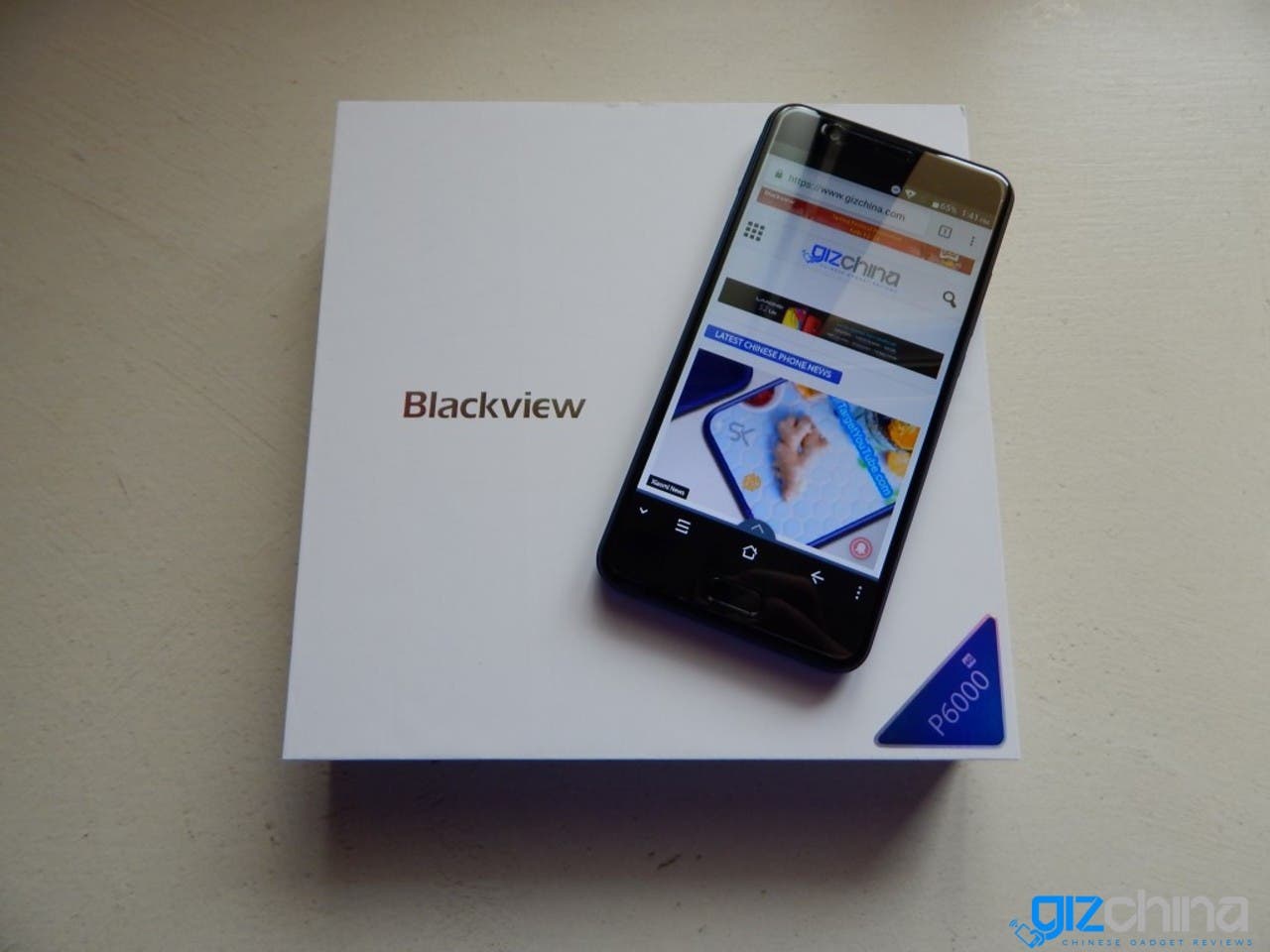 So if you’re ready to go by its increased weight (at 236 gr.) then you won’t have any problem spotting its awesome design, the impressive built quality and obviously its huge 6180 mAh battery that can surely offer more than 2 full days of heavy usage!

Enough said let’s have a look at this Blackview P6000 review. 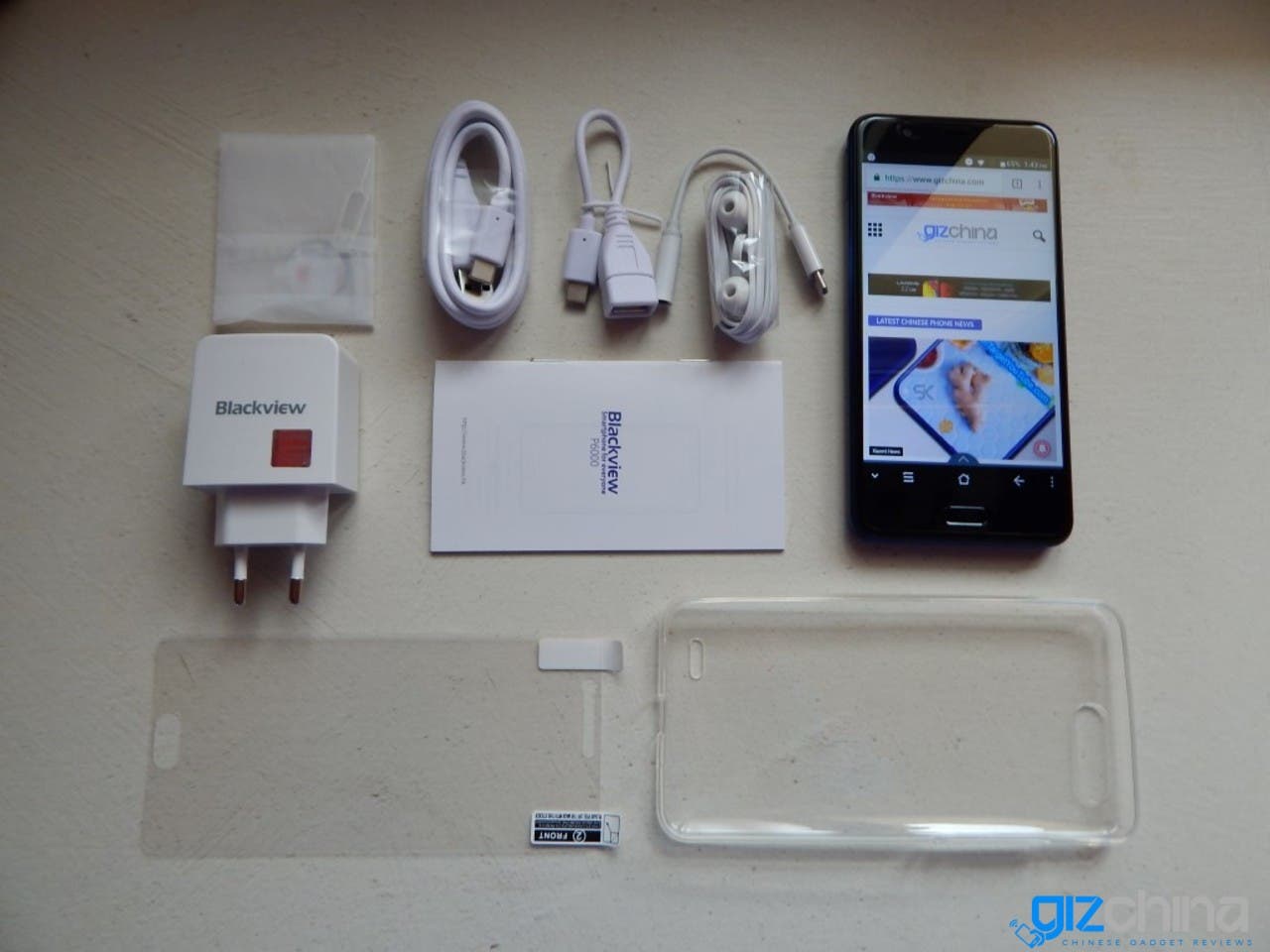 I have to be honest, I loved the basic design of the Blackview P6000 – especially its blue glossy back that is probably one of the best looking I’ve seen during the past years. 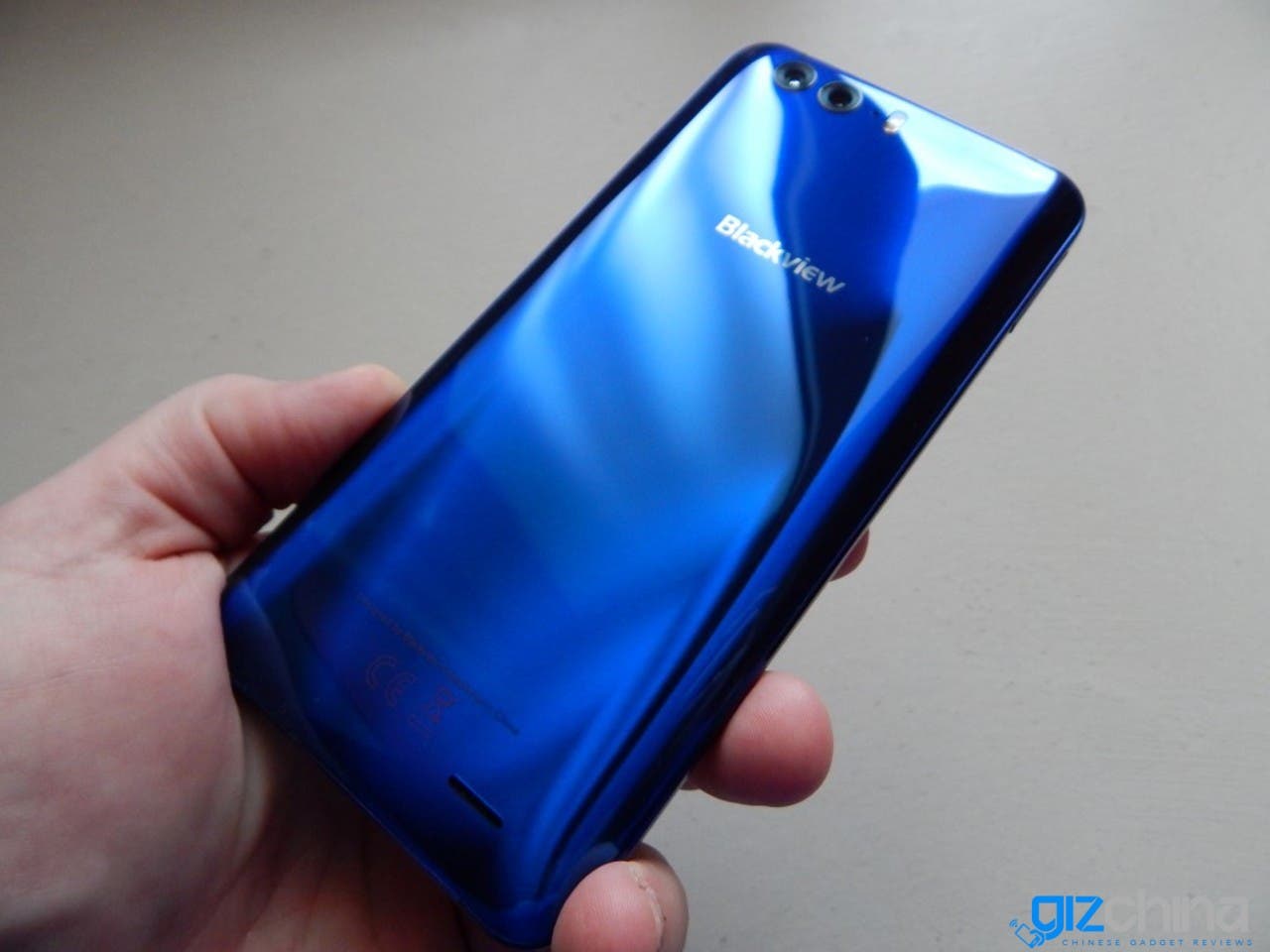 It’s no doubt, an elegant device and if you’re interested to know more, you will be glad to know it’s available in black and blue color versions. Its dimensions are 154 x 76 x 9.8 mm (LxWxH) but due to its massive 6180 mAh battery it weighs approximately 236 gr. This means it can provide a relatively slim body with a relatively good handling experience. I have to admit that one of the outstanding features of the Blackview P6000 is surely its 5.5-inch display with 1920 x 1080 pixels resolution, offering really crisp menus. It provides exceptional response times, along with 2.5D curved glass on top. 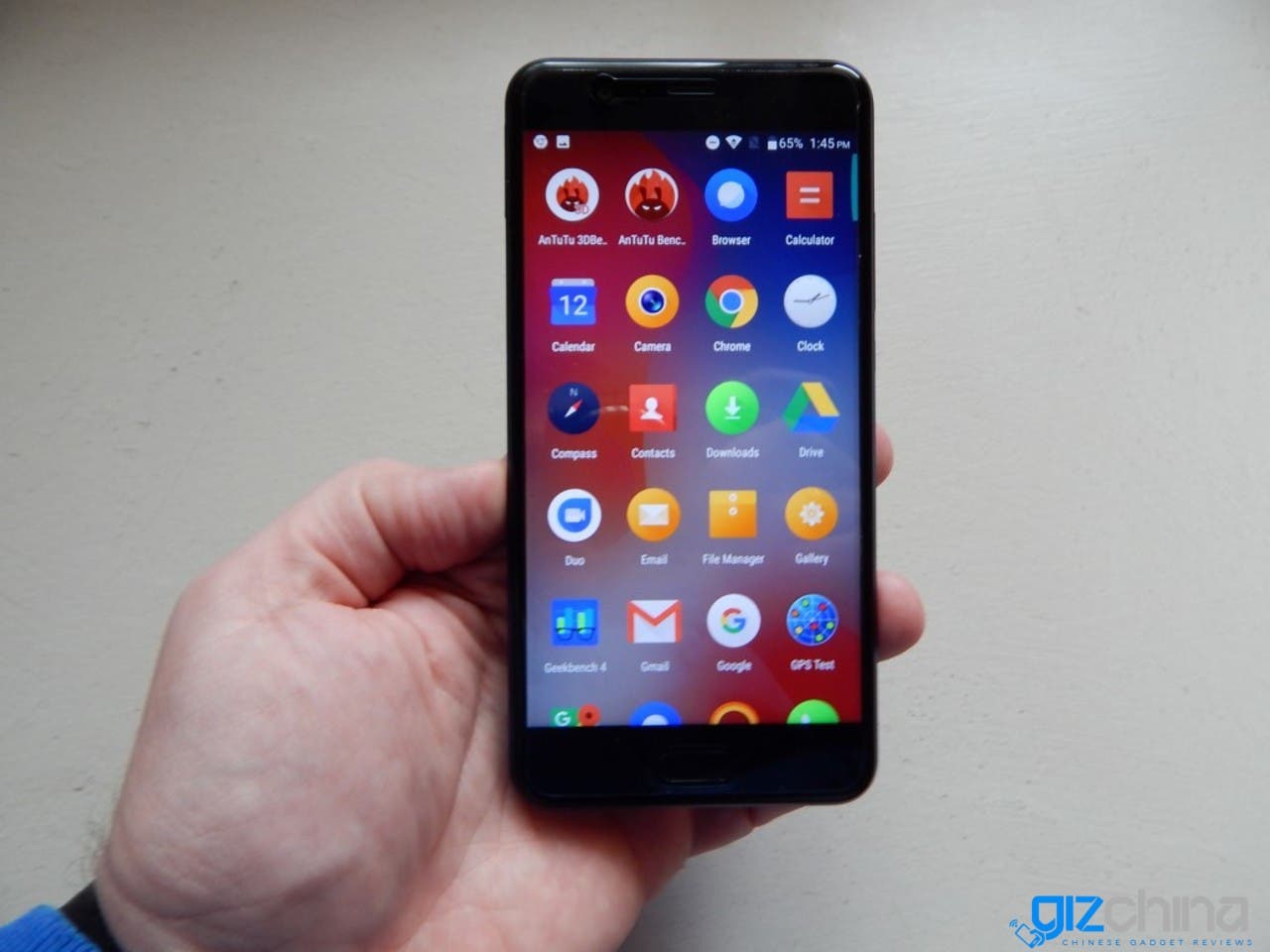 The inclusion of Gorilla Glass 3 means that it will be quite a bit less prone to damage than smartphones it competes with. However, it isn’t the most modern display either since it still features a square display ratio compared to even some more budget-friendly handsets – at 16:9. Color saturation appears natural and touch interactions are rapid and responsive. 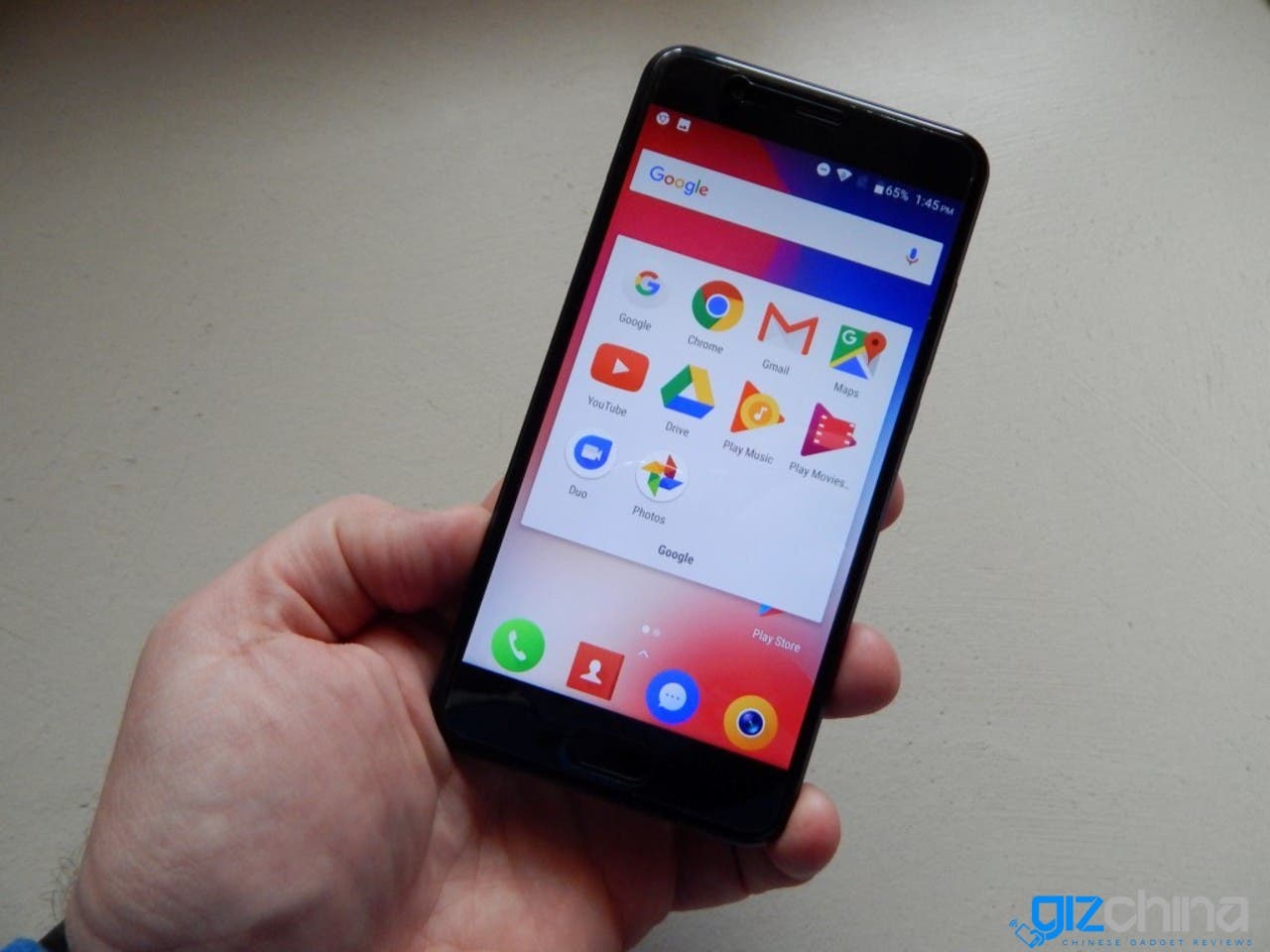 Blackview has equipped the P6000 with the adaptive display software many users have come to expect from a modern smartphone. That means brightness can be set to auto-adapt to keep things visible and save battery, font sizes and overall display size can be adjusted as needed to keep everything reading clearly. The colors of the display may be rather washed, but the images are crisp, with good viewing angles and a fully responsive panel if I may add. All in all a decent display – especially for a smartphone on this price range. 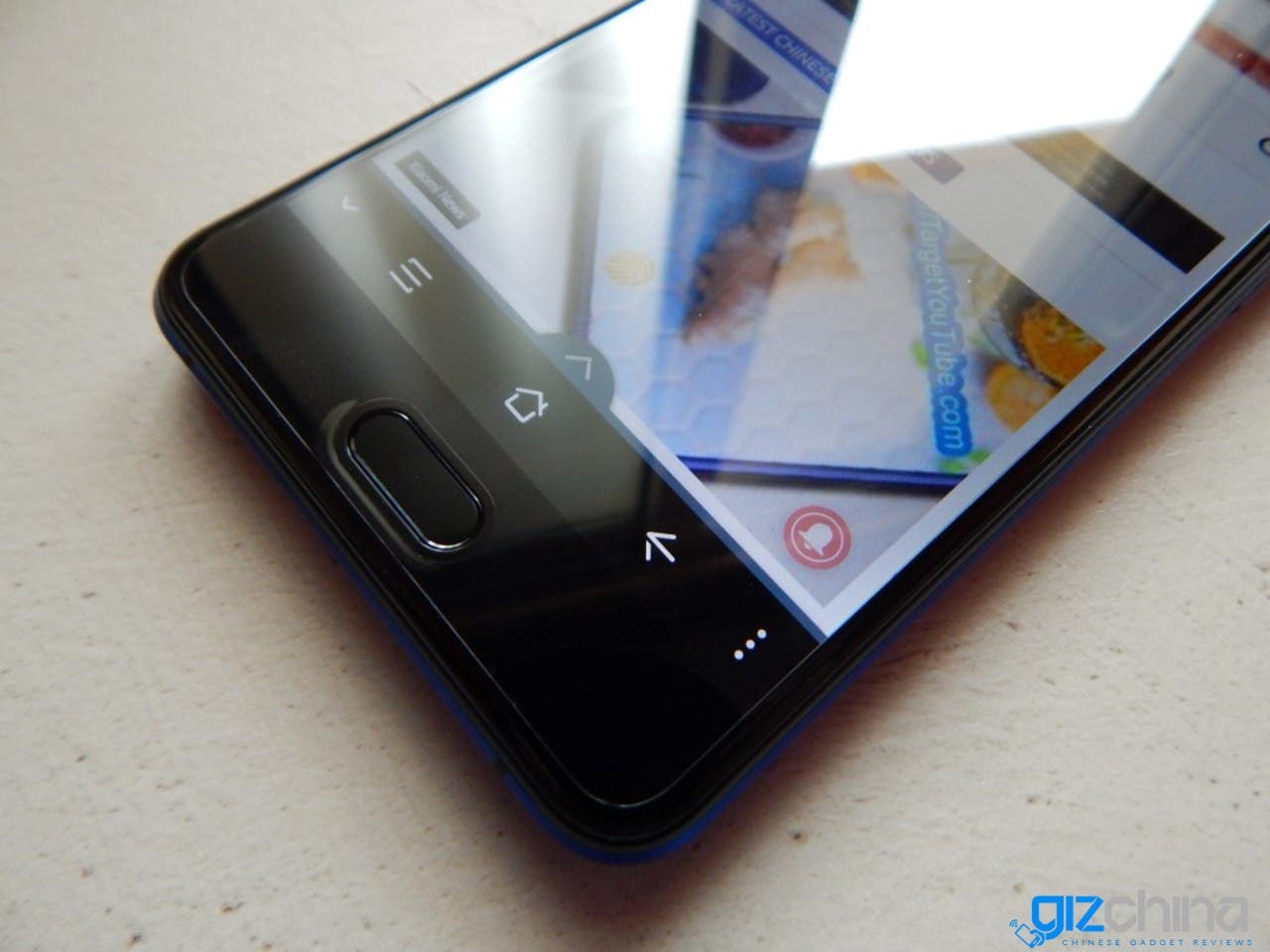 There’s a home button placed in front that houses the fingerprint scanner. If you look just above, you will find 4 on display keys on the lower side of the display, that work as planned and allow for complete operation of the device. On the top of the screen, there’s a selfie camera, a speaker and a LED flash. 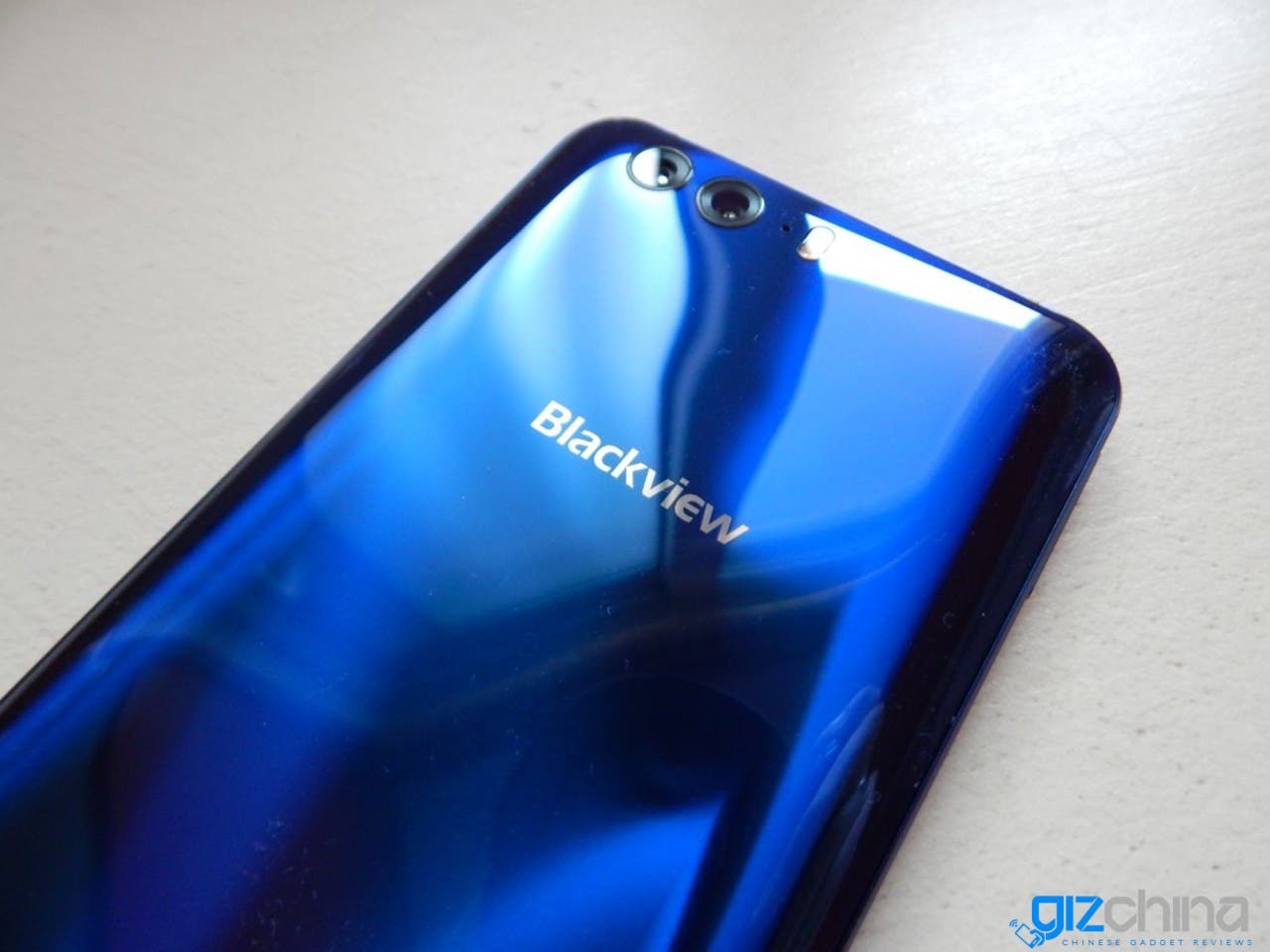 Note that the back side of the device is made of glossy material and some parts plastic, that surely create an impressive design all in all but it comes with… a twist. This means that it may look beautiful but it turns out to be a fingerprint magnet, leaving fingerprint marks all over the place. You can also find two cameras at the back side and a dual LED flash, that offers the necessary light during night for some typical photos. 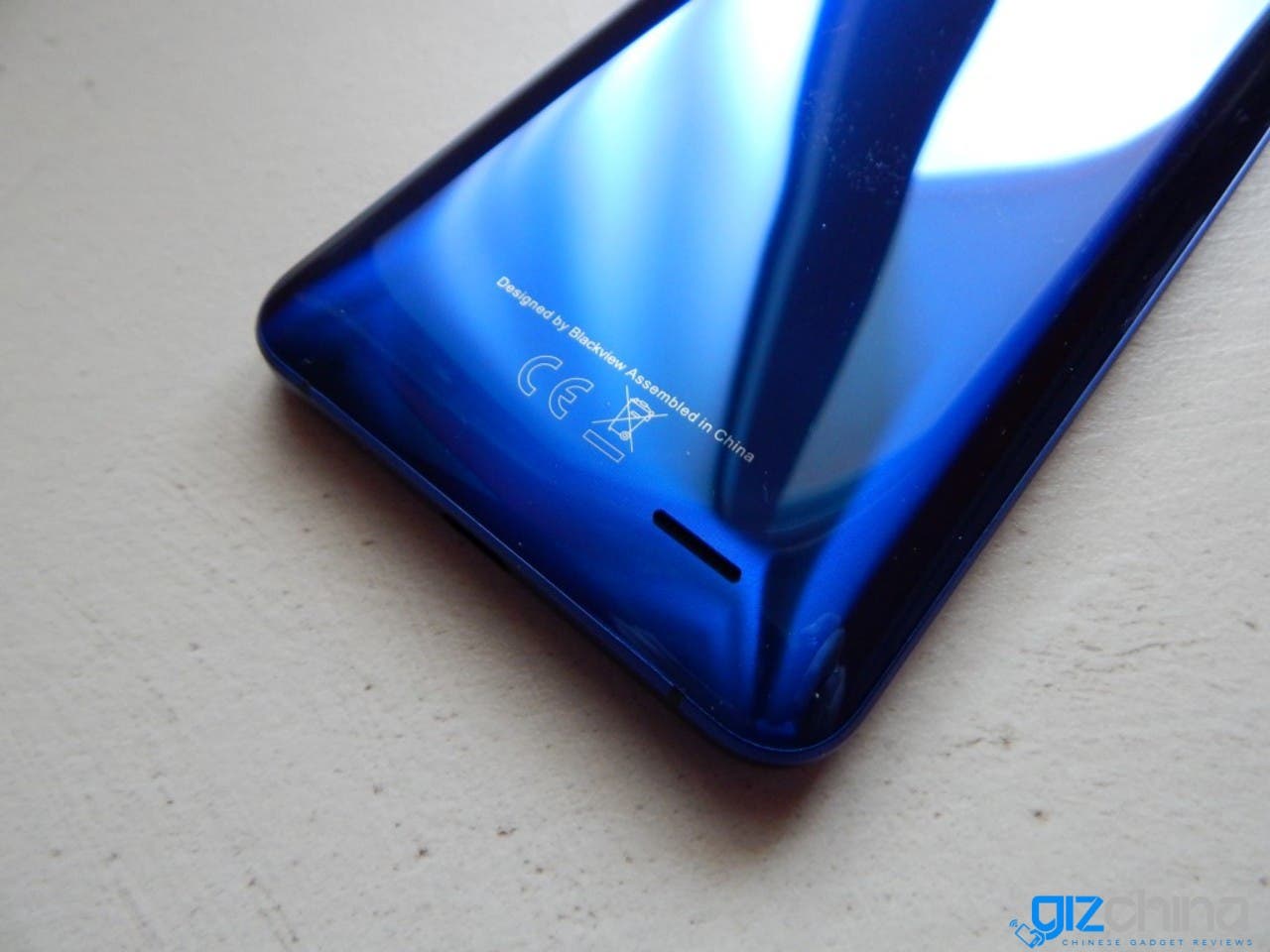 The fingerprint scanner can unlock the phone in less than 0.1 second with almost 98% success rate. It can basically store up to 5 different fingerprints and can recognize them all from 360 degrees, something that’s a standard nowadays. 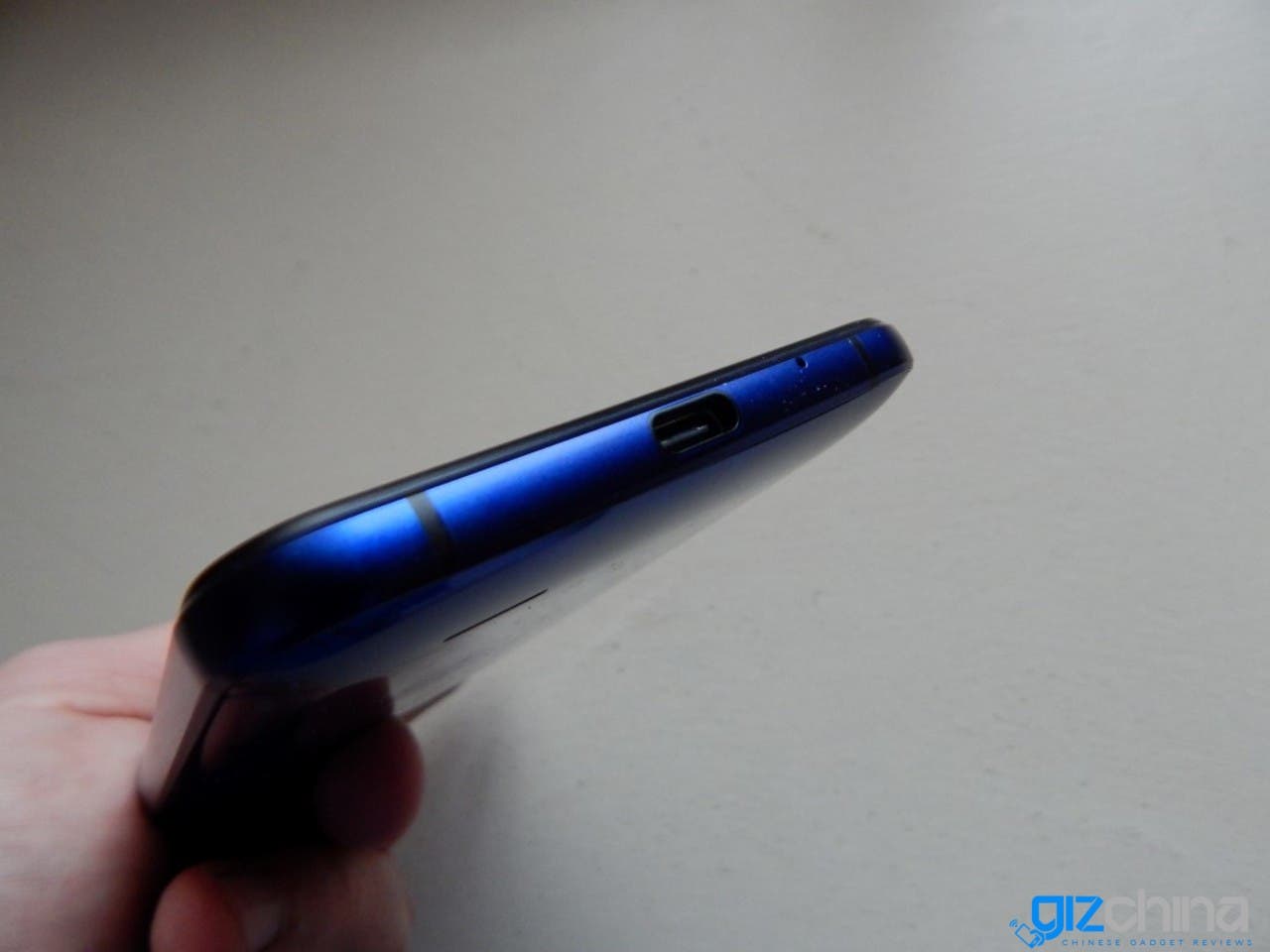 The P6000 does support the 3.5mm earphone port and this is something that will probably put a smile to the face of all those of you out there who prefer to use their own classy old fashioned headphones. The charging port is available at the bottom of the smartphone and a microphone hole is placed next to the dual cameras at the back. So overall the buttons and other features are perfectly placed. 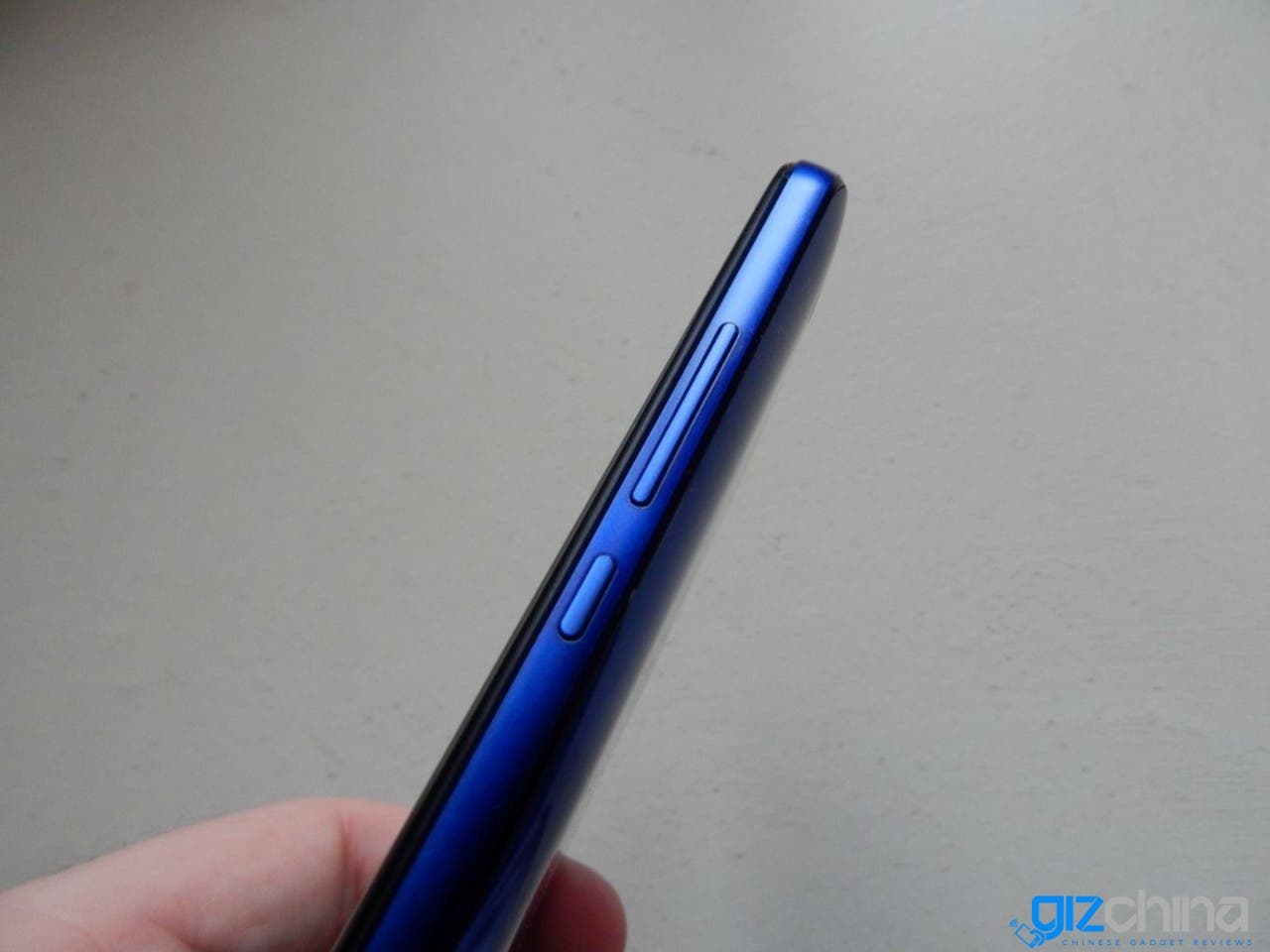 In terms of performance, the Blackview P6000 comes with the MediaTek MT6757 processor operating at a high frequency of 2.6 GHz. It packs 6GB RAM and 64GB ROM, providing high-end gaming and multitasking a fast and smooth experience. I opened many apps, switched between them, watched videos, played a game (GT Racing 2) and the performance is buttery smooth. Nothing felt sluggish, and there was no significant lag.

Oh and if you’re into checking benchmark results, then you should know that the Blackview P6000 scored 78286 points in AntuTu along with an exceptional GPS reception. I didn’t have any issues with GPS related apps since it uses most of the available satellites every time. It could be connected to more I guess, in order to offer even better results when scanning for our location.

Moreover, the storage can be expandable up to 128 GB with the use of microSD card. For the graphics, it has the Mali T880 GPU that can surely cope with most of your gaming tastes, even if you’re a demanding user. OK, it’s not a flagship model, but it will surely be able to offer decent gaming performance with most titles available in the Play Store.

The operating system of the Blackview P6000 is Android 7.1 Nougat. It can also be upgraded to higher Android Oreo but the Chinese manufacturer hasn’t disclosed yet when (and if) this will happen. Rumors say that the update could arrive to the owners of the phone by Spring – it remains to be seen. Moreover, you can also find the attractive features such as ambient light sensor, gravity sensor, proximity sensor, and so on.

With a battery backup of 6180 mAh, the Blackview P6000 doesn’t need any power bank or repeated charging at all. You won’t have to worry about the power going down while playing games, watching videos and doing stuff on it. In fact, Blackview P6000 smartphone is your best partner while traveling as it doesn’t strangle you by showing reduced battery level during such odd circumstances.

If you like pimped user interfaces, then you will surely gonna love the Blackview P6000 in terms of UI and software. The device comes with its own UI (based on AOSP Android 7.1.1) which is surprisingly solid, fast and easy to use. That means that, aside from a few basic Google and essential AOSP apps, the phone doesn’t come with any bloatware to speak of. In fact, the only application that probably wouldn’t be expected with a stock version of Android is the included Compass app. 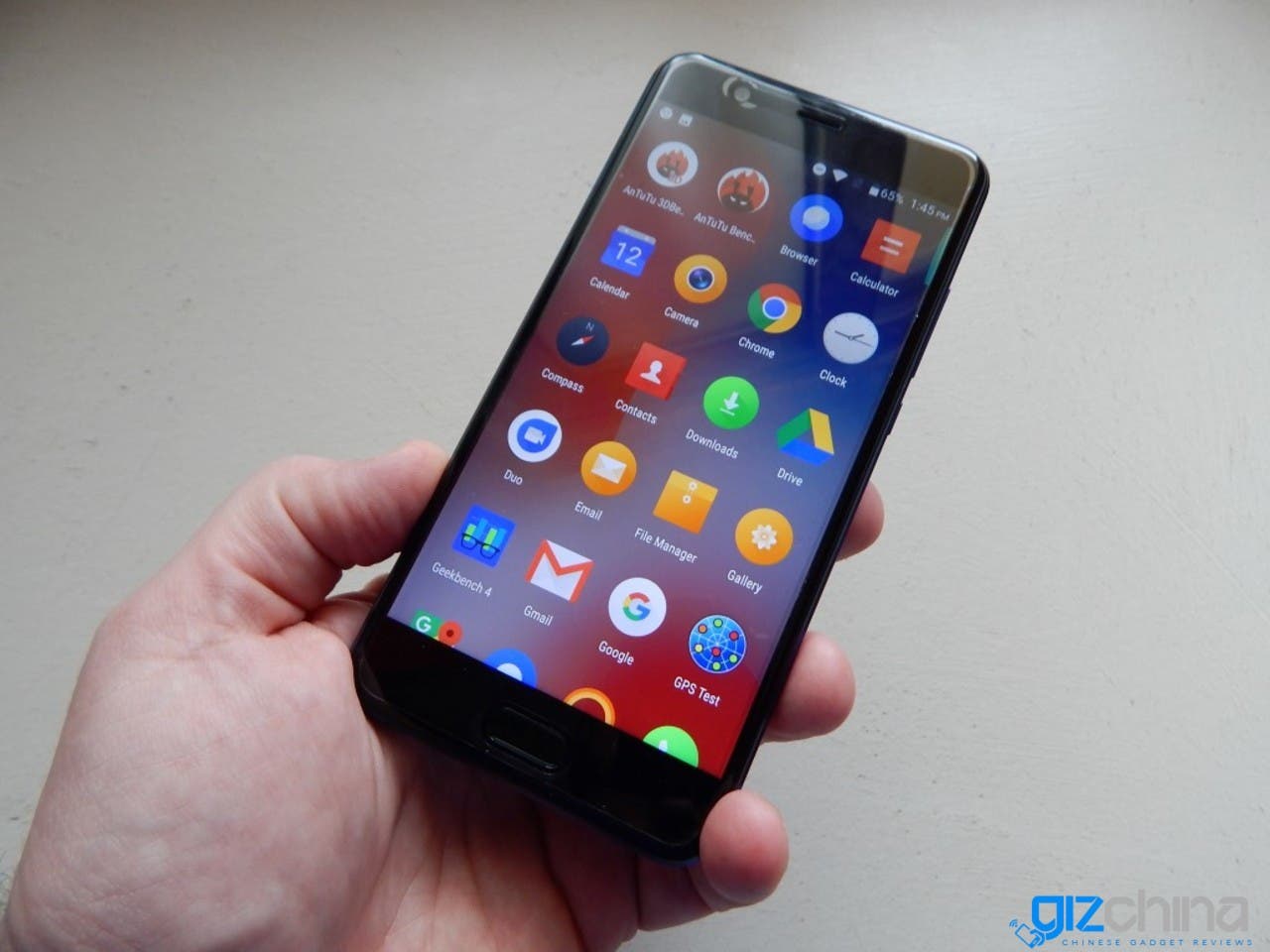 Blackview however has managed to add some features of their own choosing to the device such as several customization options like System Motion, Gestures control and the ability to lock apps with the fingerprint scanner which is common these days. Double tapping the home screen or a long-press on the same can be set to perform custom actions. The same can be done with the power button, with a double tap capable of launching the camera application and a long-press – when the screen is turned off – being custom-assignable. Gesture navigation through the fingerprint scanner is also available.

If you’re interested in the imaging features of the device, then this might seem awkward, but it didn’t manage to impress us. The rear camera is a dual-sensor setup of a primary camera built on Sony’s IMX230 Exmor RS sensor platform with an f/2.0 aperture and a secondary 0.3-megapixel, 2.25μm GalaxyCore GC0310 sensor for phase detection and other dual-sensor features. There’a also a dual tone LED flash next to them, along with several typical settings for autofocus, digital zoom, face detection, HDR mode, manual adjustments mode, a dozen or more real-time filters, and the ability to shoot continuous photos – as well as having the capability to shoot RAW images via a settings toggle. 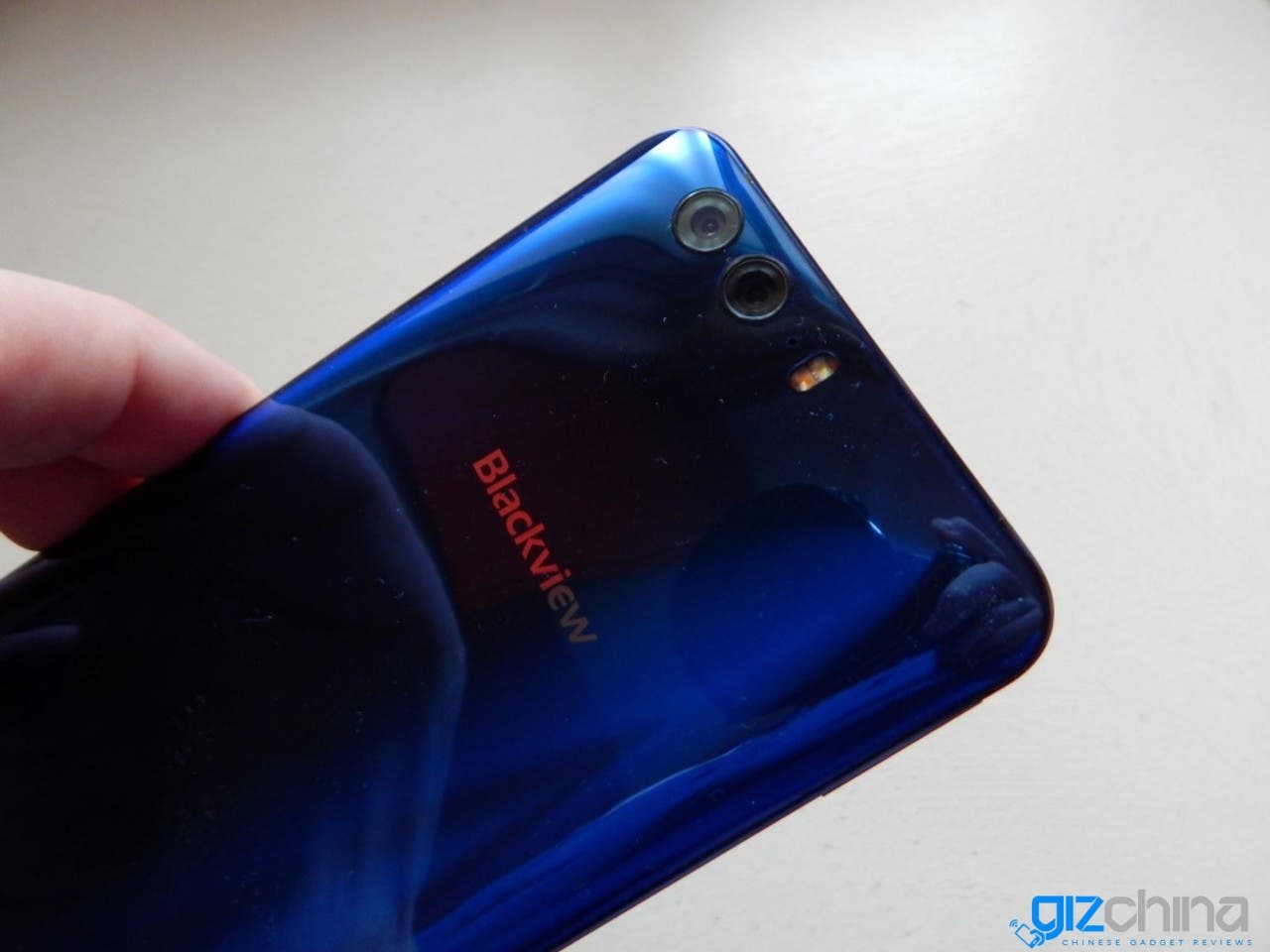 It can take decent photos, but they are generally whitewashed. Even with HDR mode, the quality of the photos is not any better. Note that one camera is used for creating the bokeh effect and other will capture the image with quite good portrait photos and decent performance in low light conditions.

Both cameras have independent vision processing unit, which enables background blurring in real time. It also allows you to choose where to focus (touch focus) and where to blur, with the ability to adjust the intensity of blurring, too. Video recording of the device isn’t something that can surely impress us either I am afraid.  There’s no optical image stabilization to be found on Blackview’s P6000, no slo-mo capability but at least video recording is shot at 30fps.

Have a look at some of our sample photos, taken from the dual camera of the Blackview P6000. Just click the gallery below:

The Blackview P6000 is equipped with a 6180mAh battery that surely trumps any other competitor in the market, offering awesome battery life that can reach up to 2 days of full usage with no issues at all. The device comes with an energy efficient processor and generally it performs well, working great in cooperation with the Android Nougat interface in order to block access to battery “hungry” apps, reduce energy consumption when possible and all those little things that make our lives easier when using a smartphone. 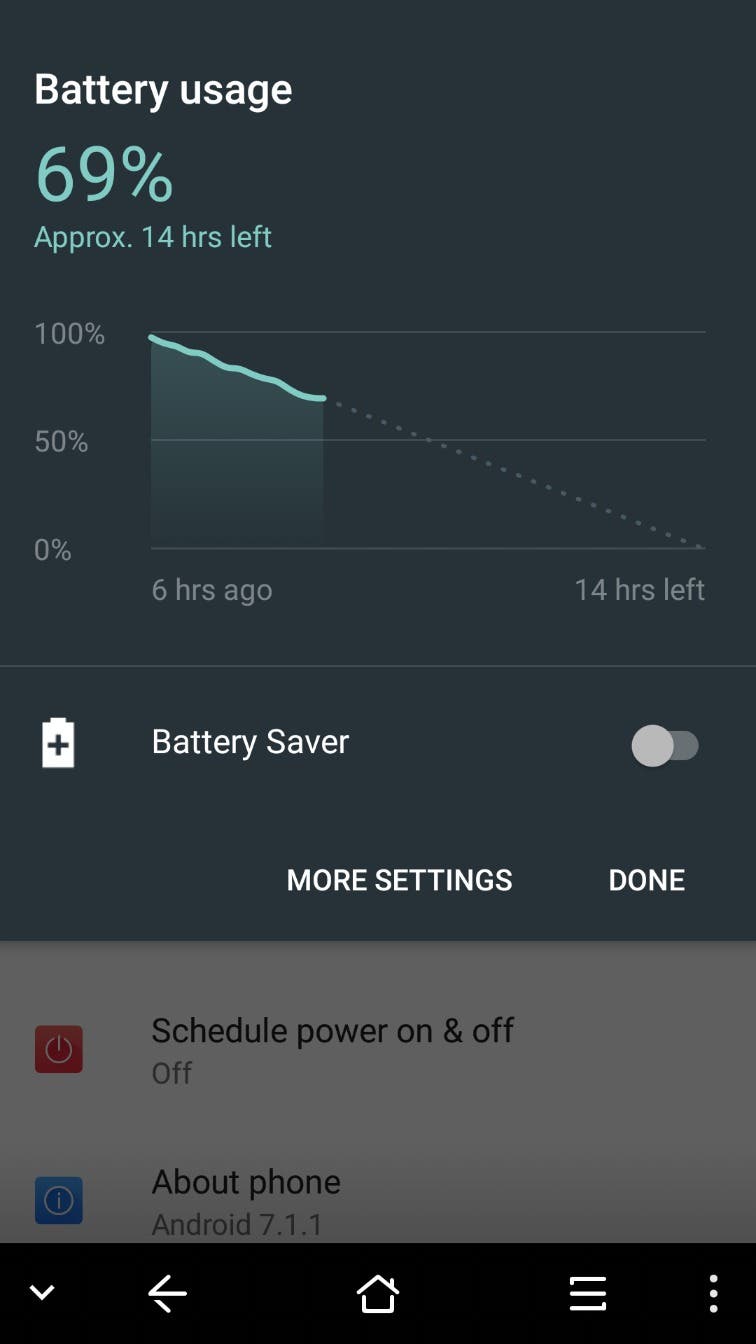 It’s battery tests were impressive and lead to a whopping 7 hours of screen-on time, even with a full (hard core) usage. During our tests we managed to reduce its battery capacity to 59% (from 100%) after almost 13 hours (!) of typical tasks simultaneously, such as listening to music, gaming, editing documents, browsing and others.

Note also that – according to Blackview- the P6000 comes with Quick Charge 2.0 support and charges at 12V/2A. However this didn’t appear to be true, as it takes a little bit over 3 hours to fully charge this 6180 mAh battery.

Thankfully however there is no overheating when there’s continuous charging or prolonged gaming in extreme conditions. Blackview did a good job on this and the phone feels safe to use even though we’re holding a massive 6180 mAh battery in our hands.

I really enjoyed this small beauty from Blackview, I have to admit. Given the fact that it’s considered to be technically a mid-range smartphone, it surely doesn’t act like one. It boasts an impressive design, a huge battery that transforms it into a power machine with more than 40 hours of usage, a full HD display with decent ppi, great brightness during daylight and a quite impressive chipset for mid-range users. 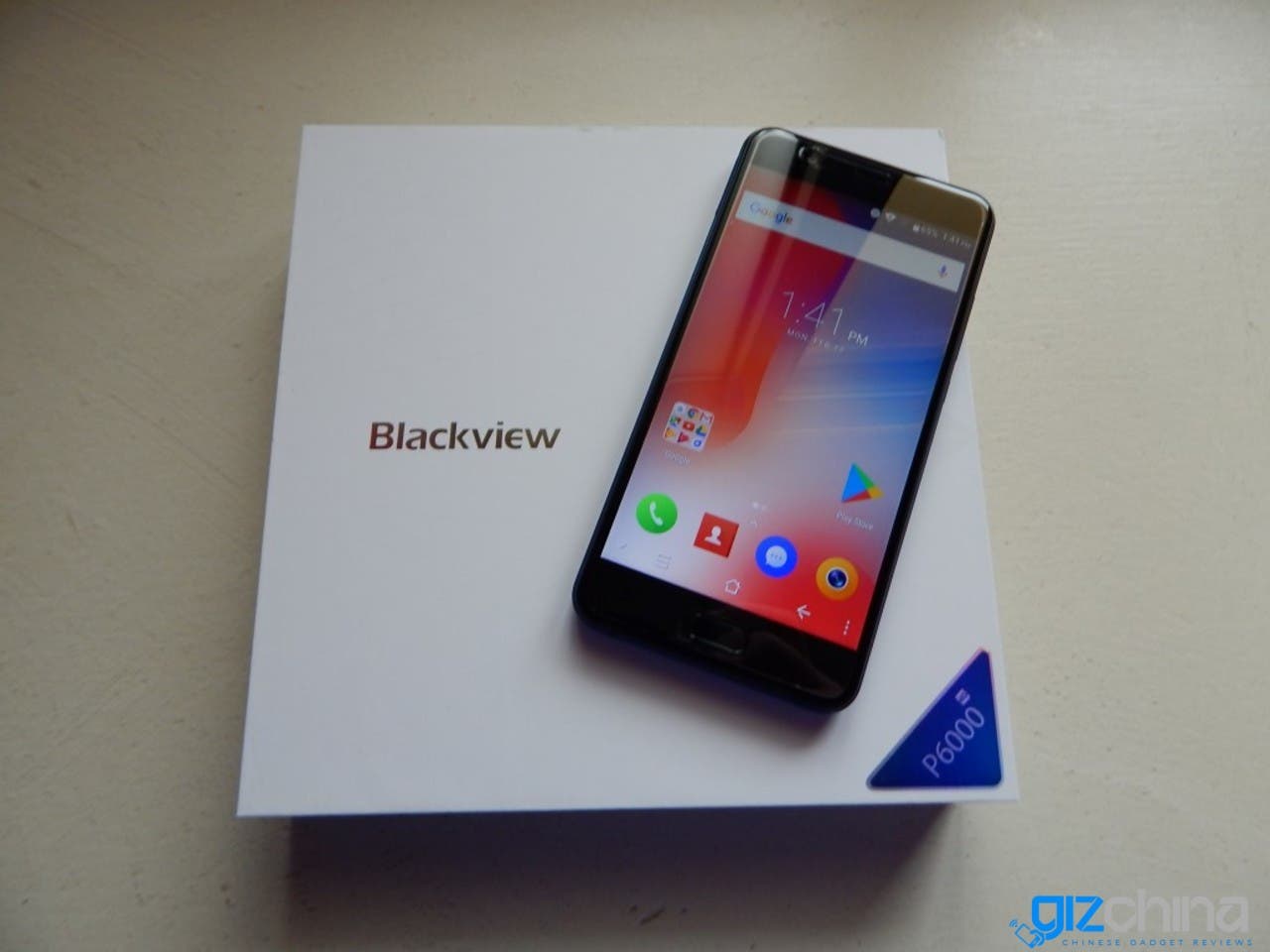 It packs 6GB RAM + 64GB ROM that surely result in excellent multi-tasking and storage capabilities, not to mention that it also packs a microSD slot (up to 128GB). It currently costs 249$ and I guess this is something that one has to take into consideration. 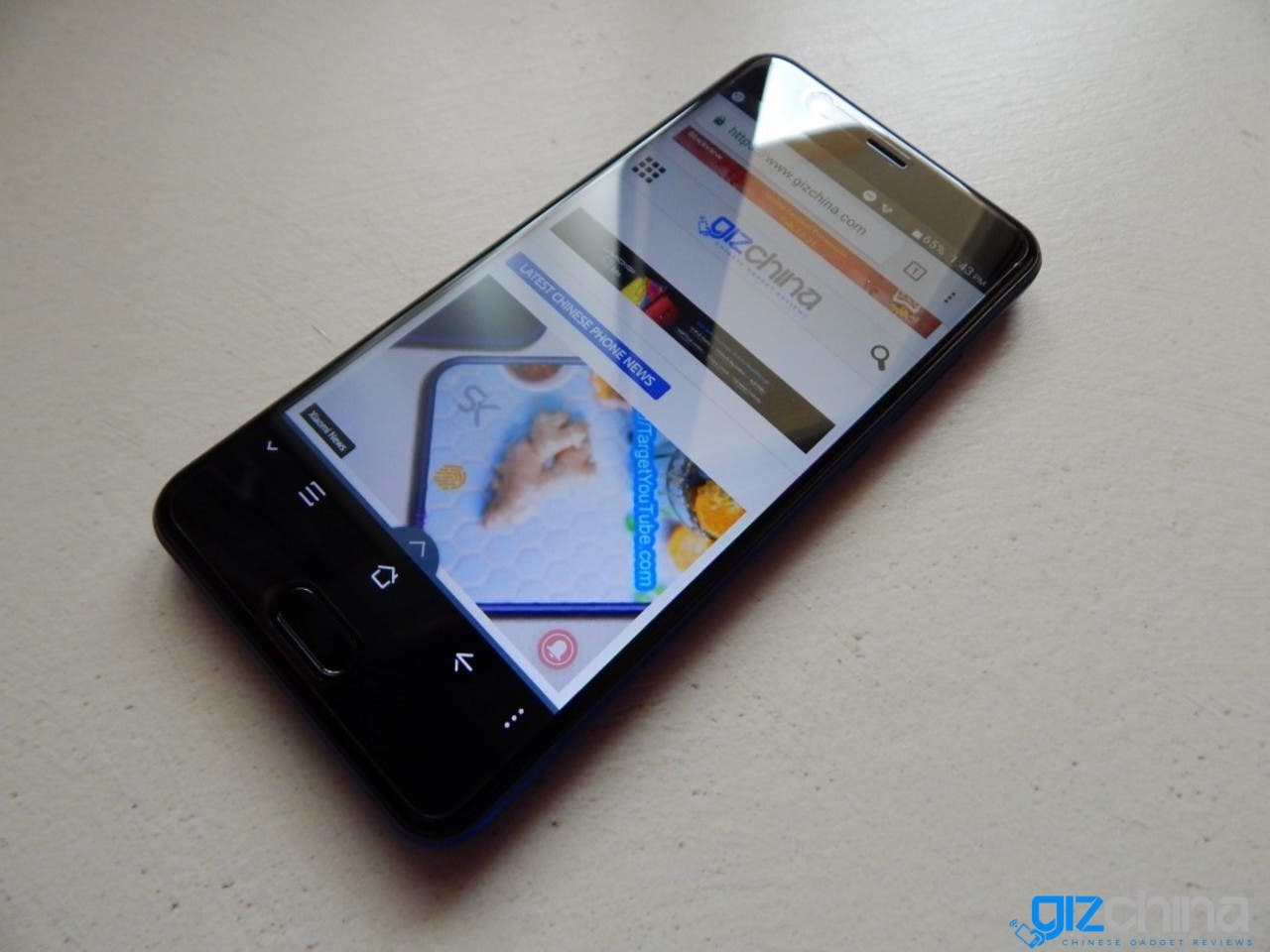 The standardized screen size of 5.5 inches gives you unparalleled visual experience. You can expect everything that a high priced smartphone can feature. If you’re into a decent large battery phone with an impressive design and typical imaging performance then, this Blackview P6000 could be the one you’ve been looking for. Who knows?

Previous Confirmed: The Mi Mix 2S is very real and it's coming

Next US Intelligence Officials Advise Against Huawei & ZTE Smartphones