The Nokia 7 Plus will be the first Nokia device this year to embrace narrow bezels. We’ve recently seen high-res renders of the handset that revealed an awful lot about the phone design. Today, the very first live image of the device leaks. 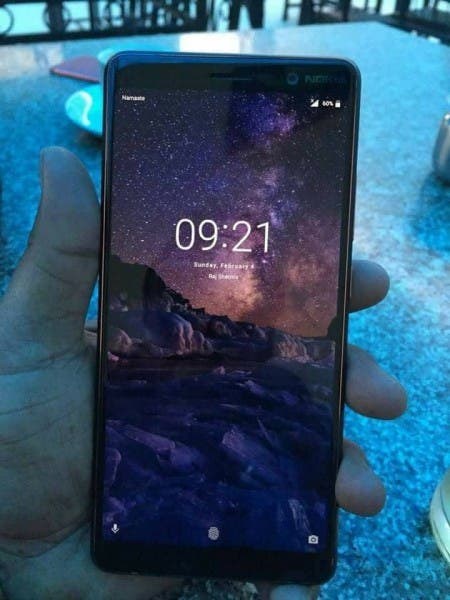 The Nokia 7 Plus sports a 16MP selfie shooter and dual Zeiss-branded cameras at the back as per leaks. Possible 12MP + 13MP lenses are rumoured to constitute the setup. Geekbench results of the phone suggest a strong Snapdragon 660 CPU and 4GB of RAM.

The handset pictured above is alleged to be the Nokia 7 Plus reported first be a Chinese website. The handset does resemble the leaked renders strikingly well. Nothing new gets revealed with the live image except the possibility that its Indian launch might be close. Notice the word “Namaste” on the top of the display. It is a greeting in India. This could be a hint that the smartphone’s Indian release is near. Even if that is not the case, we’ll still see it at MWC 2018 along with other devices like the Nokia 8 Sirocco, Nokia 1 and some more.

Interestingly, the renders hint that this is an Android One phone meaning that it will come with Android Oreo most probably. Further, tipsters believe it will at least sport a 6-inch Full-HD+ display. Judging from the renders, build quality and design seems to be solid. The two White and Black colours have a unique orange hue to them which looks cool. We expect to hear more of the device in about ten days time at MWC 2018.