It appears that Apple’s growth in the world’s largest smartphone market region (Asia) has been stagnant for some years now. In fact, reports have it that its performance is declining in some countries in the region. In Asia, there is a huge competition from smartphone brands like Xiaomi, OnePlus, Vivo, and Oppo and this forced LG out of the Chinese smartphone market. Most Chinese brands good high-end Android phones for low prices. Over the years, these smartphones have served many users very well thus the belief that cheap Chinese phones use low-quality components is becoming obsolete. Moreso, most Chinese brands now sports enhanced front-facing selfie cameras and larger capacity batteries – these are features that are yet to be seen on iPhones. These companies have obviously stalled the growth of Apple in the region. 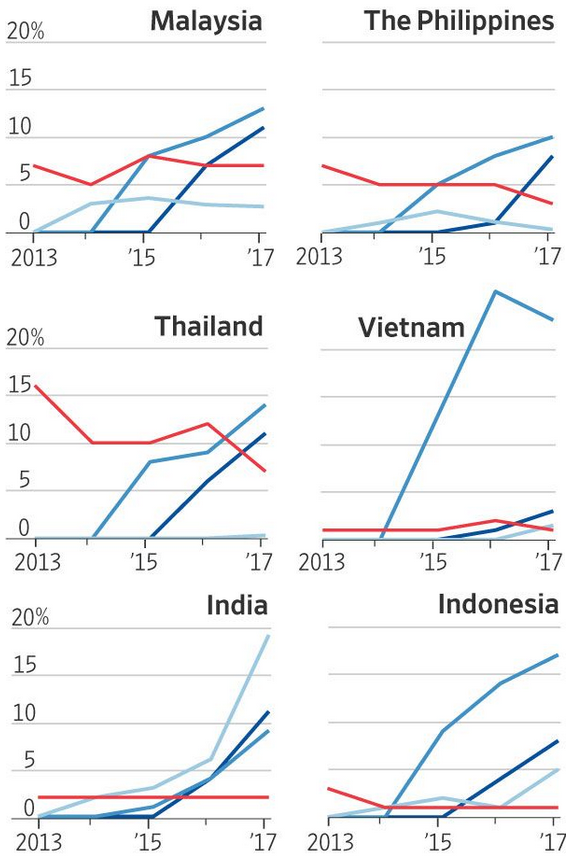 In Asian countries like India and Indonesia, a bulk of the population look for smartphones below $300 thus they cant go anywhere near an iPhone. For that price, the only iPhone that can be purchased is probably the two-year-old, 4-inch iPhone SE. In China, Apple’s market share lost 5% within five years (from 13% in 2013 to 8% in 2018). In the world’s second-largest smartphone market, India, Apple only boast of a 2% market share which can be improved. In contrast, the likes of Xiaomi have gained 16% of the Indian smartphone market share within two years (from 3% in 2015 to 19% in 2017). With the prices of iPhone and the mentality of most of the people in the region, Apple may not be able to compete with these Chinese brands.