Today Huawei confirmed its next annual flagship, the P20 will be uncovered at a special event held in Paris, France on March 27. Moreover, the video and the poster showed off it will come with Leica optics and some AI elements for better shooting experience. But as usually happens, there will be the more advanced version of the phone. A bit later, after the aforementioned announcement a Weibo user, ZEALER published a few leaked photos revealing the key features of the upcoming Huawei P20 Pro. This also means the larger variant will be dubbed as the Pro instead of Plus. 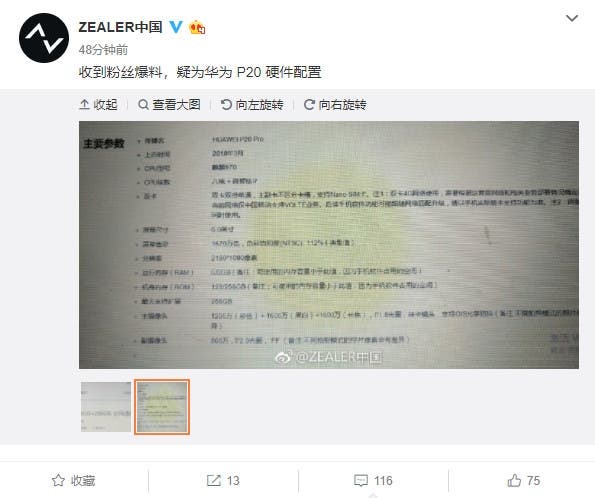 According to the leaked documents, the Huawei P20 Pro will come with a 6-inch full-screen providing a resolution of 2180×1080 pixels. Under the hood, we see a Kirin 970 chip, which is the world’s first mobile SoC with an NPU. Thus it will bring many AI goodies to the larger masses. As you know, this chip is available only on a couple of models. Not surprisingly, the phone will come with a 6+128GB and 8+256GB memory options. Say, the original P20 is said to sport a 4+64GB memory combination. The higher version of the Huawei P20 Pro is rumored to cost 5899 yuan ($930).

At last, the Huawei P20 is said to come with a dual-camera on the back, while the P20 Pro should come with a triple camera design using a 12MP color lens + a 16MP black and white lens + a 16MP telephoto lens with an aperture of f/1.8 and OIS. The front camera will be using an 8MP sensor with a f/2.0 aperture. So if these rumors are true, the P20 Pro will sport the best camera on a smartphone till the date. Earlier we learned its battery will be 4000mAh.