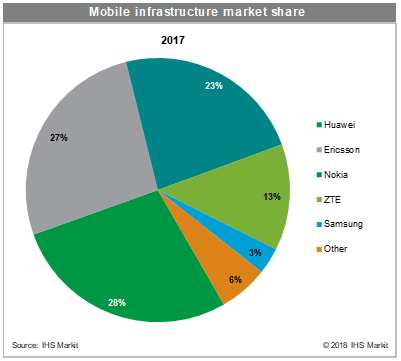 In addition to Huawei and Ericsson, HIS Markit also announced the market share of Nokia, ZTE, and Samsung in the global mobile infrastructure market is pegged at 23%, 13%, and 3% respectively. According to the report, global 2G, 3G, and LTE hardware revenues in 2017 were $37.2 which is a decline from $43.3 billion in 2016.

Previous Ulefone Armor X could be the first rugged phone with 18:9 display and wireless charging