The Chinese smartphone market is the largest in the world. It is highly competitive and manufacturing giants such as LG has been forced to pull out of the market. The only foreign manufacturers to make some impact in the Chinese market remains Apple and Samsung and the latter is slowly going down the drain. However, the major indigenous companies remain Huawei, OPPO, vivo, and Xiaomi. According to IDC report, Xiaomi ranks fourth in the first quarter of this year. Xiaomi’s domestic shipments of smartphones totaled 13.2 million units, and its market share reached 15.1% which is a 41.8% year-on-year (YoY) increase. 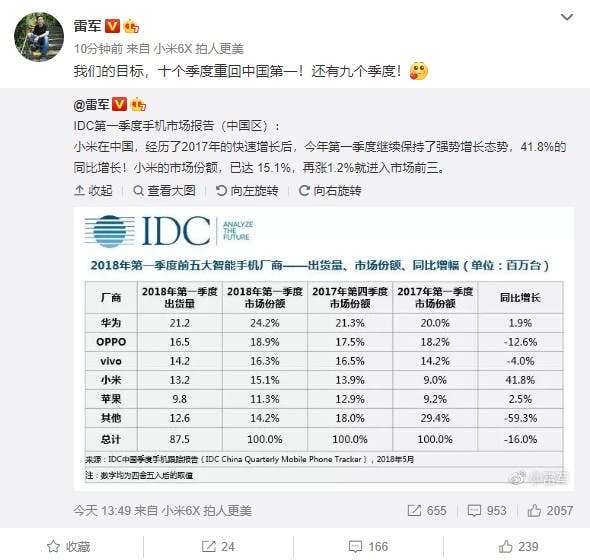 However, Huawei remains tops with 21.2 million units and a market share of 24.2% (1.9% YoY increase) while OPPO and vivo came second and third with 16.5 million units and 14.2 million units respectively. OPPO & vivo experienced a YoY decline by 18.9% and 4% respectively. Generally, the total market share of mobile phone shipments in China for the first quarter of 2018 went down by 16%. Taking a closer look at the data, Xiaomi will obviously be the happiest of the top four companies. Lei Jun said

“In China, Xiaomi experienced rapid growth in 2017, and maintained a strong growth trend in the first quarter of this year, with a 41.8% year-on-year growth. Xiaomi’s market share has reached 15.1%, and it will increase by 1.2%…”

Lei Jun further stated that Xiaomi’s ultimate goal is to be top of the Chinese smartphone market in ten quarters. Do you think that Xiaomi can achieve the goal of returning to China first? Let us know your idea in the comments.