Qualcomm is undoubtedly one of the most significant smartphone chip manufacturers in the world. Its flagship Snapdragon 835 and 845 has been highly sought after while its mid-range Snapdragon 600 series has proven to be the king of mid-range devices. In between, Qualcomm will launch a new Snapdragon 700 series which was first announced at MWC 2018. At the time, nothing was said about this series but we now have details of two chips in this lineup – Snapdragon 710 and 730. The SD700 series is expected to link the gap between the 600 series and 800 series. 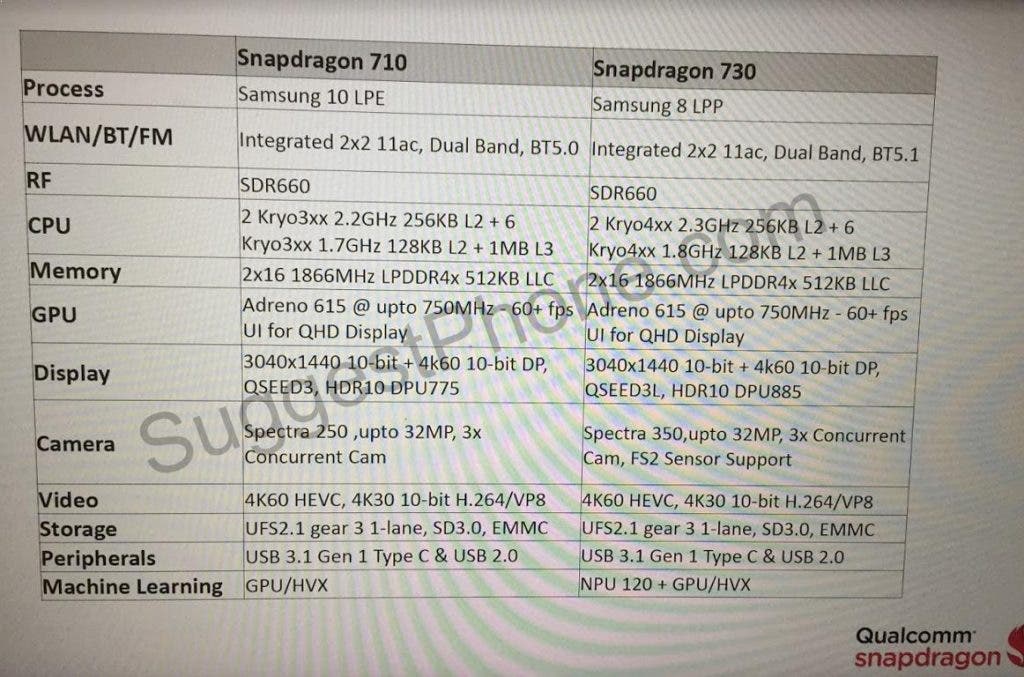 The first information about this chip surfaced when XDAdevelopers reported that SD670 will be rebranded as SD710. Some of the details shown here are similar to what we know about SD670.

Samsung’s 10nm LPE (Low Power Early) node will be used for building this chip which should have a 27% better performance or 40% lower power consumption compared with its 14nm predecessor. A dual-band WIFI with Bluetooth 5.0 will be available for connectivity and it will also support 2×2 MU-MIMO. In addition, it will sport the same SDR660 transceiver found in the Snapdragon 630 and Snapdragon 660 chips.

For display, the SD710 will sport an Adreno 615 GPU with a max frequency of 750MHz while it also supports 60+fps UI for QHD displays and HDR10. It can take a  WQHD+ 3040×1440 resolution display which implies that this chip will support 19:9 aspect ratio. The chipset will also support 4K Video recording at 60fps.

Snapdragon 710 comes with the latest Spectra 250 ISP which can take 3 simultaneous 32MP sensors. While this chip will work with UFS 2.1 and eMMC storage types including USB 3.1 and USB 2.0 ports, it will not support a dedicated NPU thus the GPU and DSP will handle the deep learning demands.

Just as the number suggests the SD730 will be a step ahead of the 710. It will be designed using the Samsung’s 8nm LPP which consumes 10% less power than 10LPP and has a 10% smaller surface area. This might just be the first chip to use the 8nm LPP process.

Although the GPU is Adreno 615 GPU just like SD710, it uses the Spectra 350 with FS2 sensor support. For connectivity, we have Bluetooth 5.1 which is the only difference between both chips. Snapdragon 730 sports a dedicated NPU (NPU 120) just like we have seen in Huawei and Apple chips. As of now, the exact launch date for these chips is not known but we can expect them sometime next year.

Which phone would you like to see these chips? Let us know your thought in the comment.