A few hours after it held the global launch event in London, OnePlus has now announced the arrival of its most recent flagship device – the OnePlus 6 in its homeland, China. Alongside the regular OnePlus 6, the company also announced the OnePlus 6 Avengers: Infinity War Limited Edition in the country.

The OnePlus 6 Avengers: Infinity War Limited Edition with 8 GB RAM and 256 GB carries the heftiest price tag, retailing at 4,199 Yuan which translates to about $660.

In China, you will be able to get the OnePlus 6 with 6 GB + 64 GB in Mirror Black, 8 GB + 256 GB in Midnight Black and 8 GB + 128 GB in Mirror Black and Midnight Black colors from the OnePlus official online store and Jingdong Mall starting from May 22, while the Avengers Limited Edition OnePlus 6 and Silk White 8 GB + 128 GB will both go on sale from June 5 via same channels.

We have already detailed the specs and features of the flagship OnePlus 6 here,  but here is a quick run through them once again.

With the headphone jack intact, the OnePlus 6, unlike previous models, is now more water resistant. The OnePlus 6 flaunts the biggest screen ever found on any OnePlus device, featuring a notched 6.28 inches display protected with Corning Gorilla Glass 5 with the trendy 19:9 aspect ratio. The device is powered by the same chipset found in most other flagships so far released in 2018 including the Galaxy S9 duo and the LG G7 ThinQ – the Snapdragon 845 chipset with up to 8GB of RAM and as much as 256GB of storage, but still lacks the microSD card slot for memory expansion.

Powered by a 3,300mAh with dash charge, the Oneplus 6 boots Android 8 Oreo (with Oxygen OS 5.1 on top) out of the box, but interestingly, OnepLus beforehand has announced the device will support the new Android P Beta from Google, giving you a sneak peek at some of the new features of the next Android OS. 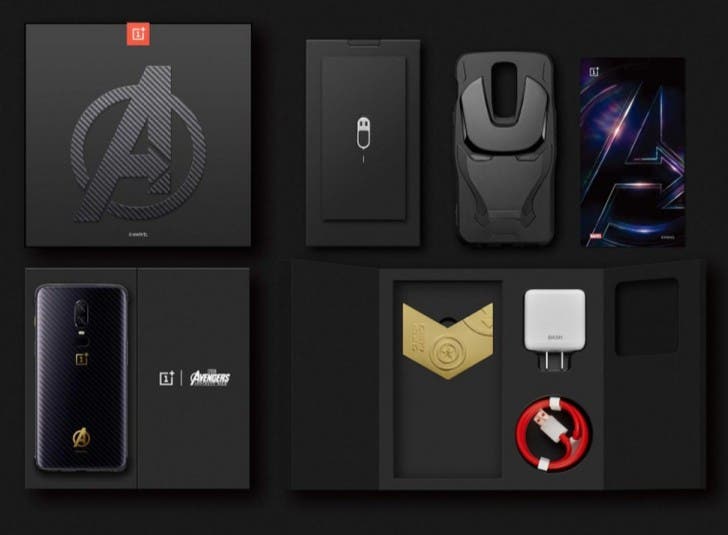 Packed in a box styled like Iron, the OnePlus 6 Avengers: Infinity War Edition is the same as the regular OnePlus 6, albeit its Carbon-textured back with a gold Avengers logo near the bottom, as well as a Gold plated alert slider.