Acer at its 2018 annual keynote event held recently in New York City, announced a plethora of products including the Acer Swift 5 Laptop. Specially designed for those who prefers portable and lightweight devices without sacrificing power, Acer says the Swift 15 laptop is the lightest 15-inch laptop in the world.

The company says it was able to cut down on the Gadget’s weight courtesy of an all-new compound material used for the laptop’s base and lid. The chassis is mostly made of the magnesium-lithium alloy, an apparently ultra-light metal compound, while a magnesium-aluminium alloy is used on the palm rest area for extra sturdiness.

With a weight of 2.2 pounds (1kg), the Acer Swift 5 features a 15-inch full HD IPS touchscreen fitted into a 14-inch chassis with minimal bezels measuring about 5.87mm (0.23 inches) resulting to about 87.6 percent screen-to-body ratio. The laptop comes with the Acer Acer Color Intelligence technology and Acer BluelightShield technology which helps adjust gamma, colour saturation in real time and adjusting of the screen’s blue-light emission over extended periods of use. Based on Microsoft Windows 10, the Swift 5 comes with support for Windows Hello through a fingerprint reader, allowing users to log in to their accounts securely.

Acer says the Swift 5 uses the latest, but unnamed Intel Core processors coupled with up to 1TB of SSD storage and up to 16GB of DDR4 memory, so the gadget should be fast and responsive.  The Swift 5 promises to offer a full day of battery life, and should come fitted with a USB 3.1,  Type-C Gen 2 port (10 Gbps data transfer, supporting power delivery and display output), two USB 3.1 Type-A ports (one with power-off charging functionality), an HDMI port, and an SD card reader. 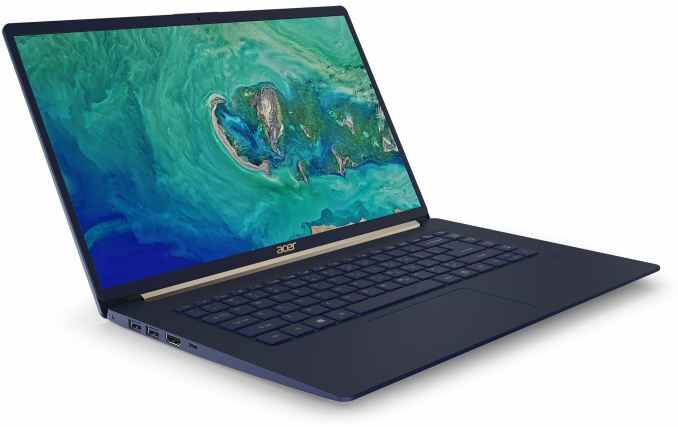 Pricing details, as well as roll out plans, will be announced later, but expectedly, pricing will vary from region to region.